Did you know that Eternatus came in second at the Taiwan Regionals that took place back in March? Well, it’s a good deck, so it’s not really a surprise. But did you know that the finalist’s decklist included a three-three Galarian Weezing line?

Galarian Weezing has gone mostly unnoticed since its release (even since Ascension Koffing was released in Shining Fates), and I think that’s a shame. I first encountered the Weezing variant of Eternatus by playing against a player named Robert Fuchs in the Atlas League. He managed to win the second quarter Atlas Invitational with it, and top cut a few events as well with the same concept. I was very impressed with the deck. Even when I was playing Rapid Strike Urshifu, I almost lost a best-of-three series to him, and I’m convinced that playing Weezing is Eternatus’s best shot at beating Urshifu. Weakness Guard Energy isn’t enough, even if Urshifu isn’t running Giratina.

I decided to play Eternatus / Weezing at the most recent Standard-format Limitless Online Series Weekly, and by coincidence, a few Japanese players brought the deck as well that same day and had strong runs, and one of them, going by yoppe06, made top cut with it. Despite that, the deck didn’t gain any popularity among the public afterwards.

I must say I’m a little surprised. I’m not claiming that the Weezing variant is perfect: running a Stage 1 line in Eternatus takes some space, and it means that the deck will have to be less consistent, or at least that some cuts will have to be made elsewhere. However, we know that this doesn’t mean it’s impossible: the Toxicroak variant had a lot of success in the Vivid Voltage Standard format. I can only conclude that Weezing is underplayed compared to its effectiveness.

Since I pride myself on uncovering underrated decks or variants. Do you remember Tag Call LMZ? Green’s Blacephalon? Zoroark-GX / Dewgong (no, I will never shut up about Zoroark / Dewgong)? What I want to do in this article is to make the case for Galarian Weezing in Eternatus. It’s not going to be a deck guide in the usual sense, because Eternatus / Weezing is, at its core, an Eternatus deck, and plenty has been written about Eternatus already that you probably don’t need me to repeat here. I’ll only focus on the differences that Weezing brings to the table, both in the deckbuilding phase and in how it effects matchups.

Galarian Weezing’s Ability, Neutralizing Gas, shuts down the opponent’s Abilities when it’s Active. This is not the first time we’ve had this Ability, but it’s the first time we’ve had it on a Stage 1 Pokemon, and I need you to understand how powerful this can be. Some decks literally don’t function without their Abilities. To give the most obvious example, Mewtwo & Mew-GX can’t touch Weezing, unless it’s the Psychic variant using Miraculous Duo GX (not the ideal GX attack to use), or it has a Stealthy Hood.

Of course, an opponent can use Boss’s Orders to get out of Weezing’s lock and bring up and attack a more threatening target (Eternatus VMAX) or easy KO (Crobat V). But what if they don’t have Boss’s Orders in hand? They have no way to dig for it! Weezing shuts down draw or search Abilities from Pokemon such as Dedenne-GX, Eldegoss V, Crobat V, Jirachi and so on. Given how much some decks rely on these Pokemon for card draw, there will be times where the opponent simply must pass their turn, buying you time.

Don’t forget that thanks to the Ascension attack, Weezing can be Active as soon as turn one, going second. You can use that to exploit an opponent’s weak turn one. 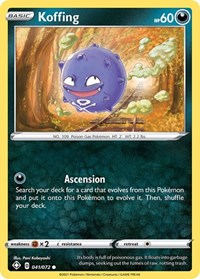 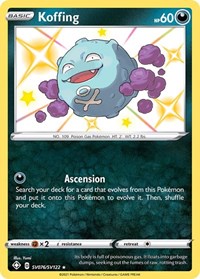 Weezing doesn’t only shut down Abilities, though, its Severe Poison also fits very well with its strategy. Just poisoning the opponent, even if it’s quadruple poison, doesn’t seem amazing: if they switch Pokemon (by manually retreating or otherwise), you only deal 40 damage. However, as mentioned, sometimes the opponent will just have to pass their turn if they don’t have access to their draw Abilities, in which case the Poisoned damage will rack up very quickly. But even if it only lasts one turn, 40 damage is important in Eternatus, because it helps a lot to KO VMAX Pokemon that are out of Dread End range. Eternatus VMAX can only deal 270 damage with Dread End, so it can only 2HKO the 310 HP Victini VMAX, for example. But it’s much stronger to deal 40 with Weezing and then 270 with Eternatus VMAX than to hit twice with Eternatus VMAX.

Weezing can be played anywhere from a two-two to a four-three line, depending on the role you want to give it. Of course, the heavier the line, the more you rely on it, whereas a two-two line means you might only use it once per game to poison the opponent and hopefully buy a turn. That said, even if you run a small Weezing line, it can affect your deckbuilding. Here are some cards that go well with Weezing in an Eternatus deck…

I mentioned above how even 40 damage from Weezing’s Severe Poison could put Victini VMAX in range for a Dread End KO, but what about higher-HP Pokemon? That’s where Galarian Zigzagoon comes in. Two Zigzagoon pings and Severe Poison will let you KO Rapid Strike Urshifu VMAX with Dread End, for example. Of course, you should probably play Galarian Zigzagoon in Eternatus regardless of Weezing, but the synergy between the two cards is notable.

Crazy Claws goes well with Weezing’s Severe Poison damage and Zigzagoon’s Ability. Yes, most of the time, Dread End will do more damage for the same amount of Energy, but where Sableye V shines is against Zamazenta V in LMZ. If Zamazenta took 40 damage from Severe Poison, then Crazy Claws will KO it even through the minus-60 damage reduction from Metal Goggles and Full Metal Wall GX. If Zamazenta has a Cape of Toughness instead of Metal Goggles, then it’s not immune to pings and you can add one Headbutt Tantrum to make sure it’s KOed.

The downside of using Galarian Weezing is that you must expand an Energy attachment on a non-Eternatus Pokemon. If you use Ascension on turn one but your Weezing get KOed on the next turn, then you’ll still have to take two turns to power up an Eternatus VMAX, and that’s one turn where the opponent isn’t Ability locked but you’re not doing big damage either. Exp. Share fixes this because, when Weezing is KOed, you get the Energy on Eternatus and you only need the following turn’s attachment. Exp. Share also helps to use Sableye V if you’re running it. Note that you can also put an Exp. Share on Weezing to get an Energy after your Eternatus VMAX is KOed and use your manual attachments for the next Eternatus. 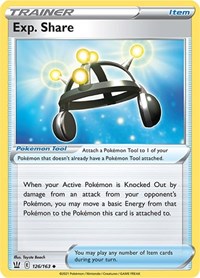 While it’s in competition with Exp. Share (which only works with Basic Energy), Hiding Energy is nice in this deck because it needs a bit more mobility than the average Eternatus decks, since you’ll sometimes want to retreat Weezing into Eternatus, or vice versa, even when they’re not KOed. Dark City works in a similar way: sure, it won’t help you retreat Weezing, but it will help you get Koffing Active on turn one to use Ascension, and it can allow you to save your Switch for when you want to retreat Weezing.

Since Galarian Weezing shuts down the opponent’s Abilities, other cards that reduce their options will have better results in combination with it. There are multiple angles you can take. The main disruption card is Crushing Hammer, already present in many Eternatus lists. It’s harder to fit in a list that also plays a Stage 1 line, and it can only be done at the expense of some consistency, but the results can be impressive, especially against Rapid Strike Urshifu. After using Gale Thrust, Urshifu threatens to use G-Max Rapid Flow, which can KO Weezing and damage another target on the Bench. A Crushing Hammer prevents that option and forces the Urshifu player to switch twice and get another Energy, all without using Abilities.

Marnie and Reset Stamp provide hand disruption. Yes, you’ll be running Marnie no matter whether you’re using Weezing or not, but the synergy between the cards deserves a mention, and Reset Stamp can be devastating when you can’t use Dedenne-GX or Crobat V to draw out of it.

Absol can, in theory, be a nice addition, but I’ve tried it and haven’t really found it useful. It would be amazing against Urshifu if its Ability worked on Evolution Pokemon as well, but as it stands, it’s only a niche choice.

Finally, Stadiums can add disruption too. Power Plant and Chaotic Swell can both create issues for the opponent. It is counter-intuitive to run Power Plant in a deck that already shuts down Abilities, but Weezing won’t be Active all game long: it’s good to have a way to keep the lock in place when you switch to Eternatus to take KOs. There’s also Black Market Prism Star, which has never been all that impressive in Eternatus if we’re being honest, but maybe this is the best place for it!

Here’s the list I’ve been using recently, heavily based on yoppe06’s. I do not make any claim that it is ideal, but it’s been doing okay for me in Players Cup Qualifiers:

Stéphane Ivanoff is the back-to-back winner of the North America International Championships in 2018 and 2019, and was ranked first in Europe for the last two seasons. Twitter