Last month I recorded a video in which I tried to play Mewtwo & Mew-GX / Rillaboom, a deck that had been getting some attention. My first matches with the deck went very well. I then decided to bring the deck to an Atlas League tournament and an E&D’s Qualifier, both of which I won, with slightly different decklists. I also made Top 32 at the latest Limitless Online Series Weekly with it.

I’m not the only one to find success with this deck, of course: more and more players have been picking it up, including Tord Reklev, who made Top 8 at the aforementioned LOS Weekly. There’s a reason for that: it’s a very good deck! To be more specific, it’s a deck with few bad matchups, but several pretty good ones, including the popular Rapid Strike Urshifu VMAX. I think M3w / Rillaboom is a very good choice for Players Cup IV Qualifiers, and this guide is here to help you understand the deck and its many options, as well as how to play the most common matchups you’ll face.

Let’s start with a short presentation. M3w / Rillaboom is a deck focused on Mewtwo & Mew-GX, which uses Rillaboom as an Energy accelerator, which can be set up as soon as turn one thanks to Rowlet & Alolan Exeggutor-GX’s Super Growth. Ideally, you’ll want to go second to use Super Growth on turn one. Then, starting on the next turn, you can put Energy on your Mewtwo & Mew-GX to use attacks such as Pheromosa & Buzzwole-GX’s Elegant Sole, Vileplume-GX’s Massive Bloom and Incineroar-GX’s Darkest Tornado GX.

Compared to other Mewtwo & Mew-GX decks, the Rillaboom variant has the strongest Energy acceleration. Unlike Welder, you don’t have to use your Supporter to get Energy in play, which means you’re free to use another Supporter, such as Mallow & Lana or Boss’s Orders. Being able to Boss and accelerate Energy on the same turn is great in Mewtwo & Mew-GX mirrors, because you can bench a new M3w and KO your opponent’s on the Bench, which they can’t do unless they play Great Catcher.

One downside of relying on Rillaboom for Energy acceleration is that your opponent can KO Rillaboom to limit your options. However, this is not that easy to do. It’s hard for an opponent to find time in the midgame to Boss’s Orders a one-Prize Pokemon, and not very useful once you already have a lot of Energy in play. A turn two Boss’s Orders on Rillaboom, after you use Super Growth but before you can use Rillaboom’s Ability, is a real threat, though. Thankfully, few decks can realistically KO a Benched Rillaboom on turn two; Eternatus VMAX is the main one. Fire decks can hit Rillaboom for Weakness, but they don’t have any attack powerful enough to KO Rillaboom on turn two without using Welder (which they can’t if they’re using Boss’s Orders). The exception is Victini VMAX’s Max Victory; however, you can attach a Weakness Guard Energy to Rillaboom to protect it from being KOed. More on how to defend yourself against a quick Rillaboom KO later. 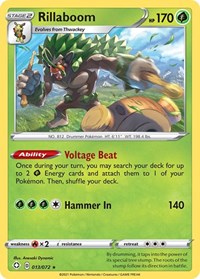 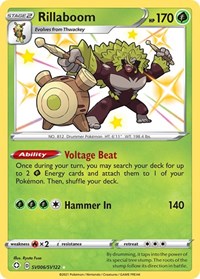 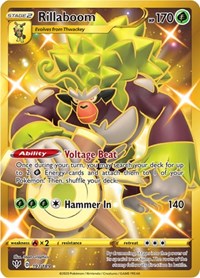 M3w / Rillaboom is a very consistent deck thanks to the Tag Call engine. Even if you start with, say, Dedenne-GX, a single Tag Call can get you Rowlet & Alolan Exeggutor-GX (henceforth known as EggRow) and Guzma & Hala; in turn, Guzma & Hala can search for Air Balloon, Capture Energy and a Stadium. You can then play the Capture Energy to get Grookey, attach the Air Balloon, retreat to EggRow and use Super Growth. Technically, you don’t even need Air Balloon here as you can simply attach the Capture Energy to Dedenne-GX and discard it to retreat.

The Tag Call engine is also nice because you don’t really need to draw a lot with this deck: your Energy acceleration comes from your board, so you often don’t have to play a draw Supporter, and you can instead play utility Supporters such as Mallow & Lana.

One last thing to note is that playing a deck that prefers to go second in the Players Cup Qualifiers is very nice. Most decks want to go first, so even if you lose the coin flip, there’s a good chance that your opponent will choose to go first, which is what you want anyway.

Here’s the decklist that I’m currently using in the qualifier tournaments:

Stéphane Ivanoff is the back-to-back winner of the North America International Championships in 2018 and 2019, and was ranked first in Europe for the last two seasons. Twitter