We didn’t want the Pokemon community to miss out on a Champion’s Path set review and with the set coming out this Friday, we decided to push this piece out the door a bit early. Keep an eye right here on CFB on October 1, when we dive head first into providing the best Pokemon content on the internet for all of you.

For those new to the Pokemon world, I’m Caleb Gedemer, three-time Regional Champion and Content Editor for CFB. I’m thrilled to introduce all of you to our Pokemon content with this Champion’s Path set review. This is a mini-set, so there’s aren’t as many cards to highlight, but there are still some cool new cards that I think you’ll be interested in that will impact the format.

If you’re new to Pokemon, this is the perfect intro and if you’re looking for a change of pace, now is the perfect time to pick up some product and follow along with our content. In the future, you can expect some crossover content from Magic to Pokemon, including seeing some of your favorite players try their hand at the opposite game!

Pokemon has something for everyone and we’re ready to get working for you with a brand new Pokemon inventory and daily PTCG content from the world’s best creators and players – our full launch is set for October 1!

Check out our Champion’s Path production selection while you’re here!

Unfortunately, Venusaur V is the closest thing Champion’s Path brings to the table for playable Grass-type Pokemon. That said, this thing is pretty bad – decent HP, decently-strong attack, but Grass just doesn’t have the support it needs to hang with the rest of the format. There’s Rillaboom, but it’s clunky, and it already pairs best with Rillaboom VMAX. 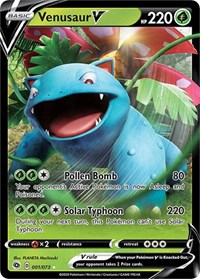 Grand Flame is a solid attack – Welder ramps up your Energy, then you can load up an attacker on your Bench. Flare Blitzer is okay, it could deal more damage, but it’s a solid-enough punch for the cost. It’s unclear if Incineroar V will get a VMAX card at some point, but for not it’s presentable enough to see play in a Welder Toolbox deck or a new Fire-type deck. 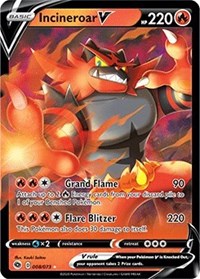 If I’m not mistaken, Wailord V has the greatest HP of any two-prizer Basic Pokemon, ever! Draw Up can set up Wailord to start attacking, and while Ocean Waves doesn’t guarantee anything, it’s not the worst attack ever. Between the HP and the efficiency at which it accelerates Energy, it could see play at some point – maybe with Frosmoth.

Both Drednaw V and its VMAX have this Solid Shell Ability, it’s nothing special, but it makes them better tanks. Drednaw V wouldn’t even be on this list if I wasn’t set on reviewing all the Pokemon V in this miniset, so here we are. Powerful Blitz could be situationally useful to trap something you wanted to fit into your Prize plan.

240 if you get heads isn’t great, but the attraction here is the HP, combined with the damage-reducing Ability. Maybe you could throw a line of Drednaw VMAX in a Frosmoth deck, pairing it with Hyper Potion and other healing to survive Knock Outs. Useful on the fringe, we’ll see. 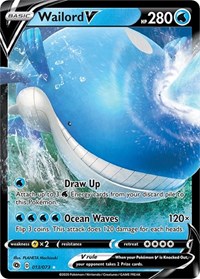 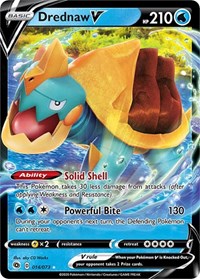 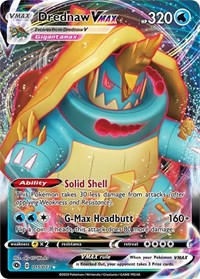 Losing Malamar really hurts Psychic decks, something like Gardevoir V could have possibly been played on its own with Psychic Recharge at its disposal, but now it’s next to unplayable – Turbo Patch exists, but it’s a flip, and even a heads doesn’t pay nearly the reward it ought to if you wanted to make a deck out of this card.

These cards do two things well at least: heal and reduce damage! Max Cure is a solid attack, but you’ll be manually powering it up. Sure, you could Turbo Patch before you evolve, but that’s unreliable. Paired with Suspicious Food Tin, maybe Gardevoir VMAX will see a tiny bit of play. Centiskorch VMAX presents a problem for any of these healing-centric decks – it will get to the point of delivering one-hit Knock Outs.

The Ability here is really nice, but the attack is lacking. When you have an Ability requiring a Pokemon to be in the Active Spot, it’s difficult to justify a home for a card like this due to its awful attack. I like that it spreads damage out, but with so many attackers that swing for one-hit Knock Outs, it looks like Galarian Cursola V won’t be making a splash anytime soon. A Weakness to Darkness Pokemon makes things even worse, Eternatus VMAX should continue to do well in Standard.

Sugary Sprinkles could be cute down the road as a counter to a spread deck, but Sweet Splash is the main attraction here. Similar to Jolteon-EX of years past, and somewhat like Galarian Obstagoon today, you can prevent the Pokemon you hit from attacking if it’s a Basic. Of course switching effects get around this so it’s not broken or anything, but it can be annoying to deal with sometimes and I could see it having a place in the metagame.

Let’s read from the bottom up here, starting with G-Max Whisk – it’s very similar to Blacephalon-GX in that it can deal more damage for each Energy you remove from your board. Instead of the Lost Zone, you’re just discarding them, so that’s a pleasant surprise. Adornment gets you to the point where this can actually deal lots of damage, accelerating up to five Psychic Energy at a time. All in all this would be a lot better with something like Naganadel in Standard, but for now it’s going to be something that probably gets better once new cards come out. It’s a very strong card and I would keep an eye on it! 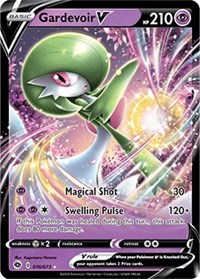 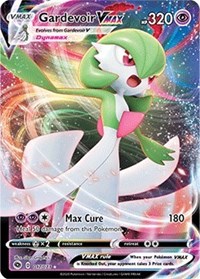 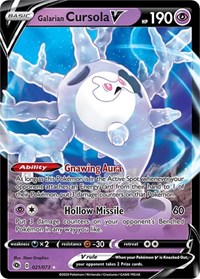 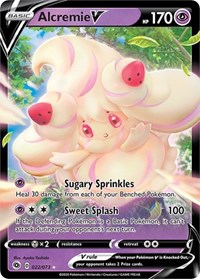 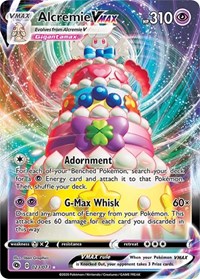 A 40, 20 snipe is mediocre and Beatdown Smash is pretty bad. Maybe if Diancie Prism Star and/or Strong Energy were still around, this would be a little better. In Expanded if you had to choose between Buzzwole-GX, Landorus-EX, and Lucario V – I might choose Lucario V since Aura Sphere deals more damage to the Active Spot; all three of these cards are underpowered by today’s standards, though.

More Basic Pokemon-affecting action, Tie Up could shut something down, but in the early game that won’t do anything. Most decks are playing multiple Switch and some are playing Bird Keeper. In the late game you could Reset Stamp an opponent low and then Tie Up for just a single Energy, there’s some potential there. Moonsault Press is horrendous, 220 off a heads flip is okay, but 120 with a tails is sad. 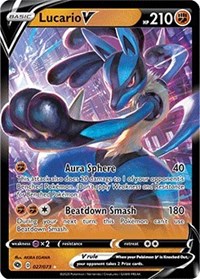 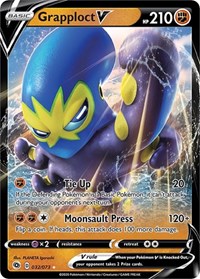 More degenerate Galarian Obstagoon cards – they seem to have it out for this guy. Wicked Ruler could play some role in a control deck down the line, but the Stage 2-ness of it will hold it back. Perhaps you could combine both Galarian Obstagoon into one deck, countering Basic Pokemon with one and using this one against everything else. I’m not ready to just call this bad, the Ability is strong, and the attack isn’t terrible either with Triple Acceleration Energy synergy. 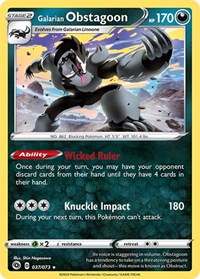 This set really has a thing for “30 less damage from attacks”. Duraludon V is mediocre, sure you could swing for a lot of damage, at a minimum something like 130 with the three Energy required to use its attack, but that’s just not cost-effective in this metagame. In fact, has it ever been? 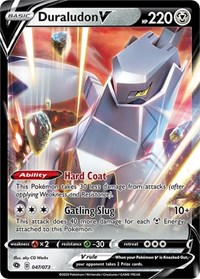 Oh no, there’s a new Decidueye in town. Altaria is just a Stage 1 – it’s Colorless attack cost makes it an instant inclusion in any deck that struggles against mono-Pokemon-GX/Pokemon V decks. 60 damage is practically nothing, but Altaria is going to be a royal pain to deal with for some decks. The most annoying thing here for me is that Altaria can go in literally anything, still providing a little offensive pressure – that pressure forces an opponent to take it down. 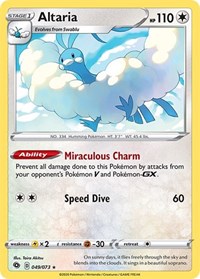 It feels odd, but this is the best card in Champion’s Path. Sure, it’s not broken or anything, it’s just a very balanced consistency card. Altaria sets you up nicely into the card you scry to the top! This isn’t Trainers’ Mail by any means, but it might be better – it sees more cards and while it isn’t additive, it can set you up for a big turn. Standard lacks Item-based support, Rotom Phone should fill some of that void, perhaps replacing the loss of Acro Bike in some decks.

Malamar paired with any of the new Psychic-type Pokemon VMAX would have been great with Suspicious Food Tin. Still, it could be okay in a Dragapult VMAX deck down the line (when Eternatus VMAX falls off, allowing Darkness-weak stuff back into the metagame) or now maybe a Gardevoir VMAX deck could use it. There’s also Alcremie VMAX – no matter what, I think they’ll be something that uses this at some point in Standard. 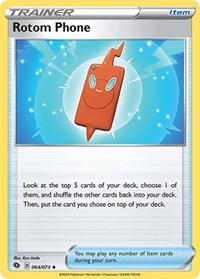 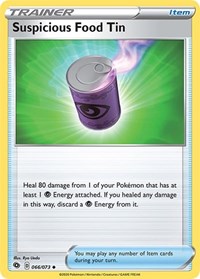 Nothing from Champion’s Path stands out in the Expanded setting – maybe Rotom Phone? – probably not. The set will mostly be a little spruce up to Standard, ushering in the potential for a new archetype in Alcremie VMAX, and maybe a few other surprises. Altaria guarantees to be annoying, and Rotom Phone will be a nice consistency boost for many decks.

Keep your eyes peeled to CFB for more of our ChannelPokemon content to come!

Three-time Regional Champion and eight-time Worlds qualifier Caleb “Shredemer” Gedemer has ranked among the top North American players for over six years running. Globally, he ranks eighth in Top 8 finishes with fourteen at major events since the 2016-2017 season.