Here’s my Unpopular Opinion: Traxos, Scourge of Kroog can be a fun Commander.

Let’s take a look at Traxos, Scourge of Kroog, who costs an enormous 55 cents. 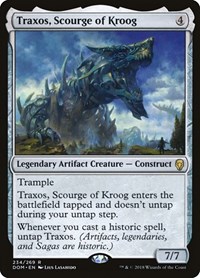 Traxos is a great deal – 4 mana for a 7/7 trampler! No problems here at all, right? Well, it’s slightly more complicated than that, as in order to untap Traxos, we have to cast historic spells. That means we’ll need lots of cheap historic spells to keep Traxos operational. We also have to deal with some of the issues of colorless decks – little to no instant speed interaction, limited removal and card draw options, and the manabase.

See, in this series, we get Plains, Islands, Swamps, Mountains, and Forests for free in our budget, but Wastes isn’t on that list, so we actually have to pay for our entire manabase within the budget. It turns out there are plenty of nonbasic utility lands available for a quarter each, so you won’t see a single Wastes in the decklist. I actually had to build the manabase before I put the rest of the deck together in order to know how much room I’d have left for nonlands! So, with that in mind, let me introduce you to my 38 nonbasic lands:

These four provide some card draw or approximations thereof – they’re not quite cyclers, but they can do the job approximately in a pinch. Blasted Landscape was too expensive, so this was where we ended up. Arch of Orazca is the only one that has turn-over-turn value.

These lands go on the offensive, blowing up opposing nonbasics or clearing out graveyards. Gotta have those effects, even in a colorless deck.

I shoehorned in as many creature lands as I could, because without having to worry about casting spells that aren’t colorless, the options open up a lot. I even spent some extra bits of the budget on Crawling Barrens, my favorite new colorless creature land.

More creatures, this time in the form of tokens. Urza’s Factory works forever, while the other two are single use.

Maze of Ith doesn’t generate mana and is expensive, so these will have to do.

A storage land can help power out some serious turns if you’re lucky.

This could theoretically provide a ridiculous amount of life gain. It probably won’t, but it’s worth including just in case.

All of these are barely upgrades from a Wastes (aside from the whole nonbasic thing) so they all get shoved into one mono-boring category.

These are just nonbasic Wastes almost all of the time, with the exception of Crumbling Vestige, which is actually worse than a Wastes when we have our best non-Commander card in the deck in play.

I did one more thing before I built out the rest of the deck: I spent about 20% of the budget on Forsaken Monument, because I couldn’t resist.

What a card for a colorless deck! It’s actually good in Historic right now, and I imagine it makes this deck way better as long as it’s in play. Expect it to get destroyed on sight because no one can handle the idea of the person with the budget colorless deck having any fun.

Now that we’ve sorted out the manabase and our best card, let’s come back around to the creatures and talk about their various functions. At this point, we’ve already spent $24.80 – that’s almost half the budget – so we’ll have to work really hard to keep costs down. That means we’re going to be playing a few cards that you might ordinarily hurl into the nearest recycling bin. I promise they all do something intentional, though! Buckle up – it’s going to be an extremely bumpy ride.

Artifact beatdown! These cards all want you to go wide with artifact creatures, with the Chief buffing the team while the other two just get larger and larger. Darksteel Juggernaut is obviously a little bit stronger than Shambling Suit, but until they reprint Darksteel Juggernaut as a functionally identical sequel to itself, we’re suiting up.

Removal options in colorless decks are not infinite, but I play Duplicant and Meteor Golem in more normal-looking decks, so it could be worse. Sparkhunter Masticore is here to tear planeswalkers apart, so it gets to live in the removal zone too.

These are our beatdown creatures that aren’t named Traxos. Sure, Crystalline Giant is a mess to play in paper, but when has that ever stopped me? I know Mishra’s Self-Replicator doesn’t look like the beatdown – I promise it’s here to go wide over a long period of time, and in the context of this deck, that counts as “the beatdown.” Oh, and don’t forget Endbringer isn’t historic.

Value, value, value. Untapping Traxos while getting some cards out of the deal is the dream, and that’s what these creatures are here to do. I didn’t think I’d be casting Skyscanner in Commander in the year 2020, but that’s what this deck does.

These creatures make mana. Opaline Unicorn has the misfortune of making mana that isn’t colorless, but it’s a robot unicorn so it has to get a slot. The other three cards are better.

Cost reduction on historic spells fits right into the Traxos plan, so this owl will continue to hoot.

These creatures take a manual approach to untapping Traxos. While we have a boatload of historic spells with which to do that already, sometimes the manual approach will be necessary. I suppose you can spend a while tapping and untapping your Palladium Myr too. It won’t get you anywhere, but have fun.

These three are just here to untap Traxos. That is their entire job. I suppose Universal Automaton might occasionally attack for 1 or soak up some board-wide tribal buffs, but that’s not really why it’s here.

Having now spent a total of $35.35, we need to fill out 33 more slots with noncreature spells. That means we get to spend about $0.44 per card. Here goes nothing.

You can’t exactly jam Harmonize or Divination in a colorless deck, so this is where I ended up for value generation. Mirrorworks takes a little bit of a different approach than the others, but they’re all here to help us get more, more, more. Weatherlight is a particular star here – even crewing it with Traxos can be okay if you can’t profitably attack with your siege engine of doom.

Again, the manual approach to untapping Traxos is going to be relevant sometimes. People will get scared of Clock of Omens until you remind them you had to spend almost 30% of your budget on your lands, many of which do nothing but make colorless mana.

Speaking of colorless mana, here are some more ways to generate it! We don’t have Hangarback Walker or Walking Ballista to sink this mana into, so may I suggest Urza’s Factory and some of our other, more terrible cards? Seriously though, you’ll need to recast Traxos and produce some big turns in order to take this deck into the late game, so the mana is necessary. Plus, half of the lands in this deck require you to pay sixteen mana and sacrifice them to scry 1 or something, so there’s that.

These cycling artifacts are actually here to untap Traxos! They replace themselves (though Fountain of Renewal requires a little more effort) so they’re a great way to spend some extra mana and keep the 7-power Commander damage beats coming.

Equipment isn’t just for Traxos, but it sure does feel good to give it lifelink or double strike. We have plenty of other great cards that will carry hammers, swords, and, uh, whatever Fireshrieker is, though – Metalwork Colossus, for example, is enormous.

Why did I put this card in this deck? I guess I wanted my opponents to suffer just a little bit. I normally don’t go in for tax effects, but building a colorless budget deck was mentally taxing, and it’s time to pass that on to the rest of the table.

Removal! All of our instants and sorceries are focused on blowing stuff up, with Gruesome Slaughter looking absolutely delightful if you have ways to untap Traxos on the same turn. The rest vary in effectiveness, with Titan’s Presence having a hilarious interaction with Darksteel Juggernaut and Shambling Suit. They both have characteristic-defining abilities that set their power and toughness in all zones, so have fun with that.

Graveyard hate. Plus, they’re cheap, and Scrabbling Claws even gets you a card, so they’re on the Untap Traxos Committee too.

Okay! We spent $49.80, which leaves us 20 cents to hoard until the national coin shortage is over. Here’s the full decklist – I’ll see you next time!