Here’s my Unpopular Opinion: Niambi, Esteemed Speaker can be a fun Commander.

We’re finally into the portion of this series that features multicolor cards! I know Niambi is relatively new, but with only 54 decks featuring her at the helm on EDHRec, she ranks #697 among all Commanders – certainly a worthy choice for this series. Perhaps we can inspire a new group of Niambi fans!

Let’s see what Niambi can do for us – for just 35 cents, she has a remarkable amount of rules text. 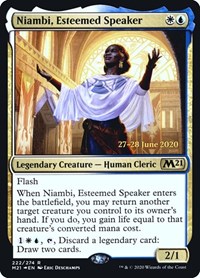 Having Flash isn’t the most amazing attribute for a Commander since she’ll be revealed, but that does mean we can use her to save creatures from removal spells. Her activated ability seems pretty strange, since legendary cards are usually good, but I promise we’re going to find some fun ways to use it.

So how is this deck going to work? Well, blink synergies could work – blinking Niambi is okay, but if we’re returning creatures to our hand, presumably those are creatures with cool enters the battlefield abilities, so blinking them should be good. Niambi’s discard ability also leads me to a possible reanimator theme, so we’ll be doing some of that as well. Throw in some small legendary/historic synergies and we’ve got ourselves a decklist!

Let’s start with the creatures – this deck features 29 of them.

These are our legendary heavy hitters. Obviously piles of keywords and stats like Akroma and Zetalpa are here, but given our budget, we have to dig down a little bit further into the card pool for options like Avacyn, Guardian Angel, who is really not close to her Angel of Hope version in power but still quite useful. Azor, the Lawbringer can be a great source of card draw – don’t sleep on his Revelations.

We also have a solid group of legendary utility creatures here. Barrin fits with Niambi’s bounce effect remarkably well, and with the notable exceptions of the two Weatherlight crew members (old and new) these are great cards to blink. Yorion can’t really do the Companion thing in Commander, but it’s still a fantastic card to play in any blink deck to really get some powerful effects going. Raff is part of that historic synergy I mentioned earlier, while Hanna gets to do powerful things like recur Elspeth Conquers Death.

Not everything can be a high-stat legendary creature, so we have some team members that are here to brawl to varying degrees while all being excited to give us some serious card advantage. Sun Titan doesn’t draw cards per se, but it can bring back some critical small creatures like Barrin or Fblthp, so it ends up in this category with the Mulldrifter Club.

In keeping with our blink theme, I have a few other creatures that will provide some value when they enter the battlefield. Ramp, graveyard hate, and combat skipping are all available, but be aware that Stonehorn Dignitary might not read as fun for some groups and might need to be swapped out for something else. Consider Rambunctious Mutt as an alternative that still has a useful effect but doesn’t shut down combat. This deck isn’t amazing at locking out a full table with Dignitary, but with Mistmeadow Witch in the mix, it’s possible.

Reanimation! Both of these cards are here to bring things back, at least sort of. Body Double is a graveyard clone, which is sort of like reanimating something, and Emeria Shepherd actually does reanimate creatures in a repeatable way. Even if you drop a non-Plains land, you still get a Raise Dead.

Burnished Hart is just solid ramp, and it works well with Sun Titan. It’s a feature of many of my budget lists, and I don’t expect that to change.

Reanimation requires us to put cards in the graveyard, and Niambi can’t be our only way to do that, so I threw in a couple of Looters to help out.

We’ll have some Blink spells, but adding some creatures to the mix keeps the value flowing. Soulherder is a fantastic fire-and-forget blink enabler, while Mistmeadow Witch is a great mana sink.

We’ve now spent a total of $25.08, and with 70 slots still empty, we’ll need to be frugal. With a deck like this, though, it makes sense to spend on creatures. Let’s move on to the noncreature spells!

Here’s the reanimation suite! This feels somewhat similar to the Bruna, the Fading Light deck I built a while back, but given that so many of the things we want to reanimate aren’t Angels or Humans, Bruna didn’t end up making the cut. Gisela’s cost really didn’t help with that either. This is mostly Resurrection and friends, but there are a few curveballs here. Back from the Brink is a weird one, since you have to pay full price to reanimate something and you get set back 6 mana right away, but it’s a card I love and it’s great value over time even if the cost is a little rough. Elspeth Conquers Death is a little slow in terms of the reanimation, but the value you get along the way is so nice. Marshal’s Anthem allows for multiple reanimations at once, and Grimoire of the Dead can really go crazy if your opponents let it. Realistically, it’s a discard outlet, but I decided to be a tiny bit optimistic.

And here’s our suite of blink effects. It’s pretty straightforward, with Illusionist’s Stratagem being the most costly one but providing some serious value. Ephemerate is probably the best card of the group. It’s so ridiculously good.

Some additional Legendary cards help power Niambi up and fit into some small synergies we have. The Circle of Loyalty rewards our devotion to legendary things, while Thran Temporal Gateway can theoretically help cheat out some big creatures. Jace and the Wanderer are here for some extra utility – I’m not a huge Planeswalker person, but when they’re cheap and useful, I worry less about them getting attacked to death immediately.

These two wraths are probably the best ones for this deck – Time Wipe lets us recast a creature, while Urza’s Ruinous Blast lets our high percentage of legendary permanents dominate the table.

Utility cards! Between card draw, point removal, and counterspells, we’ve got many bases covered. Familiar’s Ruse is fun because it lets us bounce a creature to recast for value, and I wanted to mention that in particular. Careful Consideration is here to do some looting and also get value, so enjoy your blast from the Time Spiral past with that one. (I look forward to casting it again in Time Spiral Remastered limited.)

Okay, we’ve now spent a total of $43.36, leaving a little less than $7 for the manabase. Luckily, I’m not planning to spend a ton on crazy dual lands. We’ll be using 25 basics – 15 Plains and 10 Islands, along with the following nonbasics:

Dual lands that enter untapped are usually very expensive, but these two are in budget, and that’s wonderful for us.

Sometimes duals don’t come into play untapped, though, and that’s how we end up with cards like these. Irrigated Farmland is probably the best of the bunch due to the cycling, and the quality really drops off when you get down to Meandering River, but so it goes.

Fetchlands! Okay, they’re the bottom of the barrel fetchland-wise, but they still do what we need.

Cycling lands smooth out draws, and it’s possible this decklist could use a couple more, but I stuck with a total of three.

Finally, some nonbasic hate to close out the land section.

Okay! We’ve now built what I consider to be a pretty cool Niambi list, and given that I hadn’t figured out a cool way to build a Niambi deck before this, I feel like I’ve accomplished something. Next time we’ll be moving on to Dimir – if you have a sweet underappreciated Commander you’d like me to feature in the next installment, let me know on Twitter at @RagingLevine. Here’s the decklist – see you next time!

1
Jace, Architect of Thought
1
The Wanderer