Kaldheim’s billed as the most metal set of Magic ever, and with epic Valkyries and Vikings galore, it’s living up to the hype. In a set of metal legends though, one stands out above the rest. I mean, Kardur, Doomscourge is a Demon. Berserker. With lightning on his flail and sword. How metal is that? So, I’m not going to beat around the bush. This guy needs no opening act, so kick back and enjoy the show! 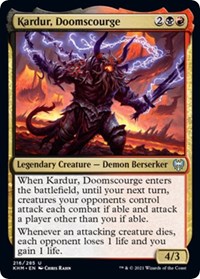 On his face, Kardur’s just a very angry Demon that makes everyone angry and rewards you when that anger makes creatures die. Really, Rakdos’s little brother is just the life and death of every party, making him perfect to helm a deck all about attacking – and not just your own attacks.

His ETB is goad but better, even catching creatures not yet in play that may show up with haste, and his second ability triggers off of any attackers dying, not just your own. Together, he not only encourages reckless aggression between everyone at the table, but he makes sure you’re set up to profit off of it the most.

The deck’s game plan is really pretty straightforward: play creatures, smash face and make opponents also smash face. In the end, the one with the least pulped visage is the victor. To help make sure that said face is yours, the deck is built to hit the ground running, with a low curve that encourages aggressively pushing for damage, often not even caring overly much on whether an attack is a “good” one. After all, with Kardur out, almost every attack comes out in your favor. 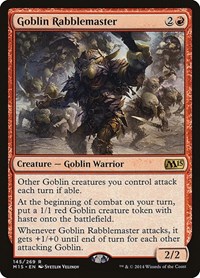 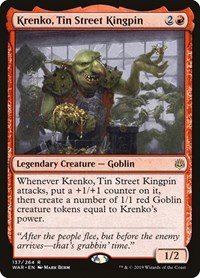 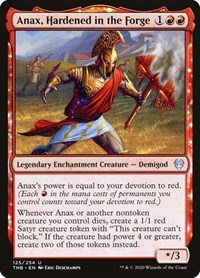 For starters, the deck does want to make sure that there are plenty of creatures to attack with in the first place.

Goblin Rabblemaster and Legion Warboss don’t give your little guys a choice, but in the end, that’s more than fine with you, and Krenko wants to rumble in more than once to build up an army of little rockers for the show.

Anax and Sifter of Skulls don’t offer tokens up front, but instead give a fresh wave of recruits every time a nontoken creature suffers an unfortunate combat-related illness. Even Chandra, Acolyte of Flame and Tibalt, Rakish Instigator join the fun, happily hurling bodies into the fray. 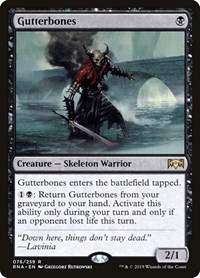 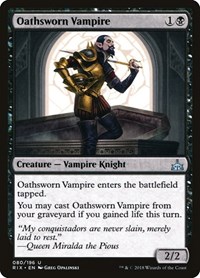 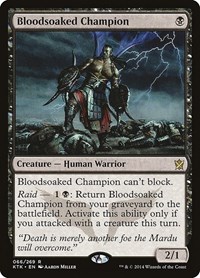 That’s not to say there aren’t plenty of regular creatures happy to rush into battle either. In fact, some of them just keep coming back for more, no matter how much they’re beaten down.

Gutterbones just needs to see some life lost by an opponent, while Oathsworn Vampire cares more about you gaining life. Conveniently, Kardur sets both up with his ability, and the Bloodsoaked Champion? Easy, you just need to keep swinging and that’s all you want to do anyway. 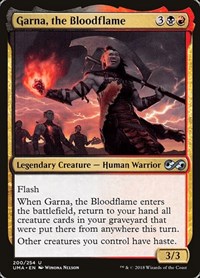 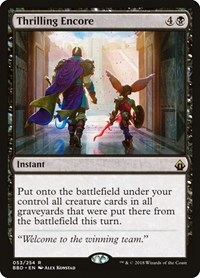 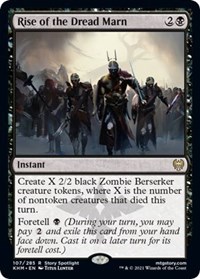 The whole crew isn’t quite as resilient as that pile though, and if you were constantly churning your creatures into the graveyard, even Kardur wouldn’t be able to keep you fueled up and able to finish the job.

Garna, though, does a solid job of picking up a pile of dead bodies and patching them up for round two, and even gives them haste to boot.

Rise of the Dead Marn is a cheap way to replace all the dead with 2/2 Zombies. Not quite the same, but a step up from the 1/1s Anax and Sifter leave behind.

Thrilling Encore is the big one, stealing everything that died, yours or theirs, and setting your board up for what is likely a lethal finishing swing. 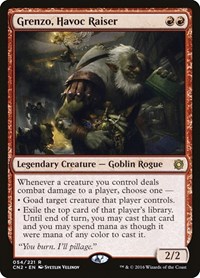 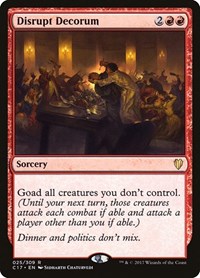 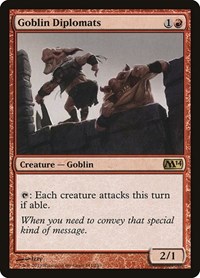 Kardur’s not picky, though. In fact, he happily riles everyone up, not just your crew. His goad-plus is only on ETB though, so there’s a few other rabble rousers hanging out in the wings.

Grenzo is probably the strongest of the lot, combining card advantage and repeatable goading into one package. Grenzo has deceptive snowball potential too once you can get a wide swing in, perhaps enabled by Kardur. If you can hit your opponents with enough creatures to goad the whole board, not only do you protect yourself (provided there’s more than one opponent left), but short of vigilance and fresh blockers, they’re left wide open by their attack for even more creatures to swing in the next turn.

Disrupt Decorum is another one-shot mass goad that’s costed fairly. Goblin Diplomats and Goblin Spymaster incite some war, as does, well, Incite War. Toss a few Curses in to encourage attacks or even just accrue value with the forced ones and it’s a solid package that can be wielded as politically or haphazardly as you desire. 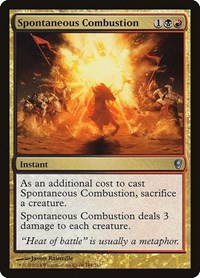 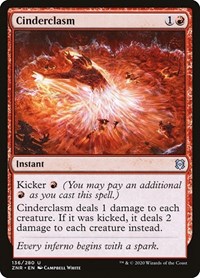 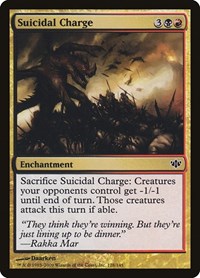 Kardur’s aristocrat effect is unilateral in its application, but only at very specific times. To make best use of that, the few sweeper effects tossed into the list are all instants. This does leave you open to bigger creatures, but… well, you know only war, and sometimes they just have bigger hitters.

Spontaneous Combustion and Cinderclasm though are both excellent for clearing out little creatures, and doing so mid-combat can also net you a nice chunk of drained life. Suicidal Charge is innocuous enough, just sitting on the battlefield until you pop it, either clearing out chaff and forcing an attack or simply wrecking a combat already in progress. 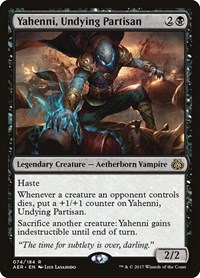 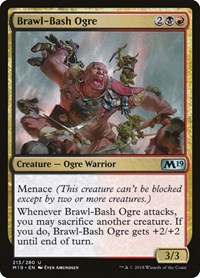 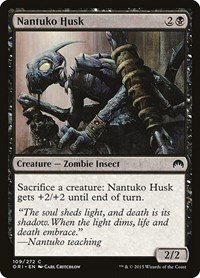 Sweepers work well, but if you want to be more selective in pitching your own attackers, Yahenni, Undying Partisan (Aetherborn do really know how to party, after all) and Nantuko Husk can do the job very well, while Goblin Bombardment can shred faces and boards alike, especially after damage is dealt but still in combat.

The Brawl-Bash Ogre and Bloodmist Infiltrator are one-shot effects each combat that still can pick up a bit of a drain as well. Captivating Crew and Zealous Conscripts are a solid combo with the sacrifice outlets too, offering your best out to big blockers. 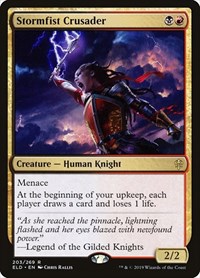 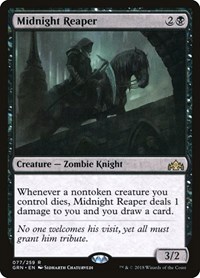 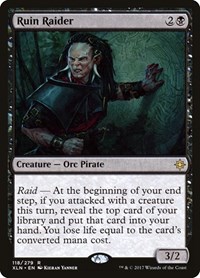 It’s not always going to be possible to keep bringing back bodies or replacing them though, so a steady stream of fresh attendees can supplement the action perfectly.

Stormfist Crusader hits the ground early and spreads some chip damage around, while the Reaper and the Raider trade bodies and attacks for more cards. The life loss on each is even mitigated pretty well by Kardur’s drain, keeping your life total healthy and hearty while you continuously send your team wading into war.

Bring it all together and you’ve got a 99 that Kardur can jam out to, with plenty of flexibility in how it’s built. A few more Blood Artists and it can turn into a combat-focused Aristocrats deck, or maybe adding Rakdos, the Showstopper at the top end could lead to a different take on a Demon tribal deck. Whichever way you take it, Kardur encourages pure aggression like no other, and sometimes, that’s just what a table needs for a game or two. If you think your playgroup needs a few more wild combat steps, you can preorder cards now on ChannelFireball, and put together your own list with some spicy beats. Until next time!