Zendikar Rising moved many things in the Modern format. As such, a Humans deck guide update is needed since my last one, just a month ago.

Skyclave Apparition is probably the best card in Modern out of Zendikar Rising, someone could also make the case for Omnath, Locus of Creation, Scourge of the Skyclaves, or Turntimber Symbiosis. The Apparition has been outstanding so far and has brought resurgence to Mono-White Death and Taxes in both Modern and Legacy.

My deck is humans only, although in the sideboard it used to run Deputy of Detention to deal with various annoying permanents post-sideboard, I’ve never particularly loved the card though. It’s not great since Oblivion Ring effects tend to be weak, but you didn’t really have any other options if you wanted to deal with Wrenn and Six, Plague Engineer, Phyrexian Unlife, and the like.

Skyclave Apparition doesn’t give the permanent back and just hands them a 1/1 or a 2/2 Illusion Token, which you can easily outrace, that makes the card fantastic against almost any strategy, particularly the Scourge of the Skyclave and the Death Shadow deck.

Last Sunday I finished twelfth in a in paper event with 76 people in Florence. I played my trusty Humans, which I tested the week prior going 13W-2L across three leagues on MTGO. I’m very happy with the current list and like every single one of the 75 cards. 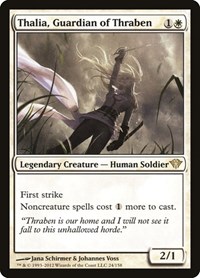 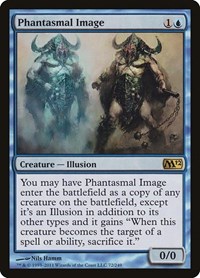 I’ve never played Humans with just two Thalia, Guardian of Thraben, but I believe it was the right cut to make room for the fourth Phantasmal Image.

Thalia has been weak for me against the various Lava Dart and Uro, Titan of Nature’s Wrath decks, plus some of the combo decks pass through creatures lately, making Thalia not even impressive in some of the traditionally best matchups, like against control decks playing creatures like Uro and Omnaths.

On the other hand, Phantasmal Image has been outstanding in combination with Skyclave Apparition and Auriok Champion, two sideboard cards that I find myself bringing in very often against the tier one deck of the format: RB Prowess. 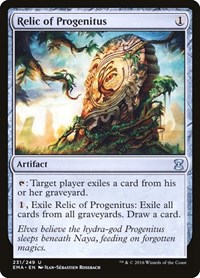 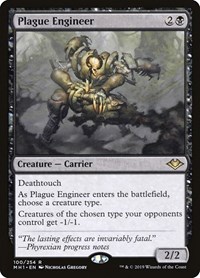 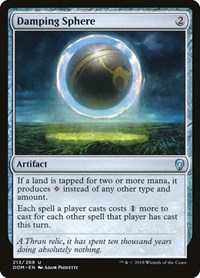 I decided to replace Grafdigger’s Cage with Relic of Progenitus because of Uro, Titan of Nature’s Wrath. I love Relic against Uro since I’m able to keep that card in check while also reducing the power of Wrenn and Six and Mystic Sanctuary.

Uro is often unbeatable for Humans in certain board states, and it’s important to keep that card in check, while also having a sideboard tool against the various graveyard strategies.

Plague Engineer is a concession to the mirror match, while also having a card against other tribe decks, for example at KOM Florence I got paired against Spirits and Goblins, the card has been outstanding.

Despite that Green Tron is on an all-time low, I always like to have a couple Damping Sphere in my sideboard, which are serviceable against certain combo decks and Amulet Titan, although I don’t like to sideboard them in against Eldrazi Tron.

Versus Uro Piles (with Wrenn and Six)

Versus Red Prowess (either Rakdos or Izzet)

Versus Oops All Spells

Versus Mono-White Death and Taxes