1
In Search of Greatness

The mono green master Rumti has done it again, reaching Mythic on day one with a 29-9 record in only eight hours. It’s always a great achievement to “speed run” to Mythic on day one and he’s famous at this point for his mono green prowess. Notably, he wrote a primer for ChannelFireball some months back for Zendikar Rising Standard’s Mono Green.

Since then, Kaldheim has added quite a few cards to the archetype, that I would say its configuration changed from a stompy deck to a more midrange-style deck. 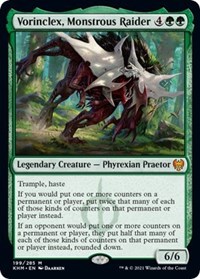 Vorinclex, Monstous Raider is the most important addition to the deck. Any deck with four Castle Garenbrig is the best home for Vorinclex since you’ll be able to play him one turn earlier.

Once Vorinclex is in play, your opponent’s Sagas will be shut off and your Scavenging Ooze, Swarm Shambler and planeswalkers will be on steroids! Note that Garruk, Unleashed and Ugin, the Spirit Dragon can immediately ult the turn they come into play thanks to Vorinclex. 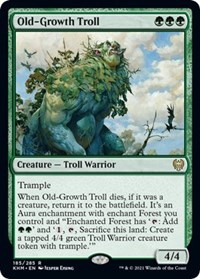 Old-Growth Troll is a great creature for the deck. Not only is it great at beating down, but when it dies, it can help you ramp towards your expensive spells or just turn back into another 4/4! 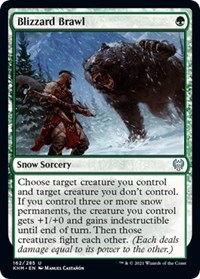 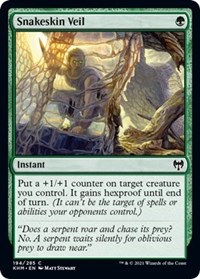 Two new great interactive spells have been added to the deck in Blizzard Brawl and Snakeskin Veil. The first one is incredible with three Snow-Covered Forests in play since you’ll be able to kill a creature and pump your attacker, all for just one mana! You could find a spot for a Faceless Haven in the deck, but the myriad of triple green card costs are demanding and leave little room for colorless-producing lands.

Snakeskin Veil is not only protection against an opponent’s Heartless Act, it’s also a solid combat trick that can take the opponent off guard. It’s much better than Ranger’s Guile, as the +1+1 counter it leaves on the creature is permanent. Remember that with Vorinclex, Monstrous Raider, it’ll be two +1/+1 counters instead! 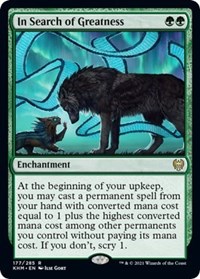 The last Kaldheim card of note is In Search of Greatness. After trying the deck a bit, and playing against few different In Search of Greatness decks, I can say that it’s underwhelming. There were games where I was able to get up to nine mana worth of spells with it, but there were also games where this card did nothing except for scry 1 every upkeep, which isn’t worth a card. I believe this card to have potential but I’d rather play another Scavenging Ooze in this deck.