If you thought that with Lucky Clover ban Adventures were done, you were wrong.

Lovestruck Beast and Bonecrusher Giant are still out there as the most popular cards in Standard. In order to exploit them even better and get the 3/1 out of them, why not play Edgewall Innkeeper? 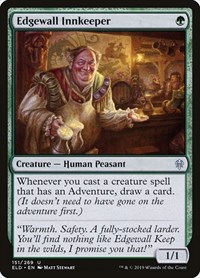 Various streamers like K_Prinz, Brad Nelson, and Ondrej Strasky have started playing Golgari Adventures again like it’s 2019, I love it!

To fight the UB Crab Mill strategy, decks are piling on escape cards to exploit the opponent’s Thieves’ Guild Enforcer and Ruin Crab. The escape card of choice for Ondrej’s deck is Polukranos, Unchained, an incredibly large threat, one that’s able to kill creatures on sight!

This deck is a midrange deck, you want to squeeze value out of every creature. If you start a best-of-three match with this deck – don’t expect it to be quick. I’ve had multiple hour-long matches playing against this with my trusty Esper Doom.

I believe this deck to be viable even in best-of-one, midrange decks adapt well to their opponent’s even with 60 cards – if you’re too afraid of Mono-Red, playing four Lovestruck Beast is a good place to start!