While Zendikar Rising has had a generally massive footprint on the Modern format, I think the single card seeing the most play is Skyclave Apparition. It’s a very nice fit for the Modern format, and has been appearing in everything from White Weenie to Orzhov Midrange to Collected Company decks–often in three or four copies.

What makes Skyclave Apparition so effective in Modern? Well, for starters, many decks cannot easily kill it. Even among those decks that can remove the Apparition, many cannot take advantage of the vanilla token creature that it leaves behind. What’s really special about Skyclave Apparition is its ability to permanently get rid of any permanent–including noncreatures–which is a unique and powerful effect to have attached to an inexpensive creature.

Magic Online player QBTurtle15 has a crisp and clean version of Mono-White Death and Taxes that features not just four Skyclave Apparition, but also Maul of the Skyclaves and Archon of Emeria as additional Zendikar Rising cards. 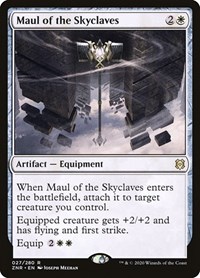 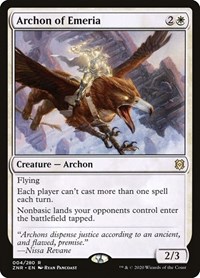 Maul of the Skyclaves is a perfect target for Stoneforge Mystic in those games where you can’t spare the mana to equip, or when you need to punch through for some damage in the air. Note that you can even use Stoneforge Mystic’s activated ability as a sort of combat trick with the Maul to equip and instant speed and help your creature win in combat.

Archon of Emeria is Ethersworn Canonist and Thalia, Heretic Cathar stapled into one (flying) body. Both of those effects are highly potent in the right matchups.

I consider Death and Taxes to be an aggressive deck, but certainly not a mindless one. What it sacrifices in speed, it makes up for in disruption, resilience, and control over the battlefield. By deploying cards like Giver of Runes, Leonin Arbiter, and Thalia, Guardian of Thraben, you slowly tighten the noose on your opponent until they find most of their spells are useless, and they’re going to succumb to the onslaught of your white weenies.

If you’re sick of non-interactive Modern decks like Urzatron and Goblin Charbelcher, I recommend trying out Death and Taxes in order to get some fun, engaging, and challenging games involving creature combat.