This is basically a dream matchup for me, in more ways than one. First, it’s lucky that I got to play against UB Control because it’s generally a favorable matchup for Abzan Aggro. The cards just dictate that I’m supposed to win more than I lose—but by how much is the question. At this point, I’ve played so much with UB Control that I know the deck inside and out, so I was able to exploit weaknesses of the deck in the matchup even beyond what the cards determine. I also think my deck was especially well configured after sideboard. 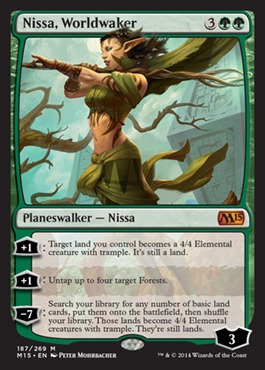 I saw Ashiok in his main deck, but while it was in good in one of the games, it would be a mistake to have any Hero’s Downfall after sideboard. Given the lack of good cheap plays from the blue­/black deck, the best way to win a game is to get a quick aggressive draw and overwhelm them. Do your best to force them to play spells and tap down on counter mana. Make their plays as awkward for them as possible while doing everything you possibly can to deal maximum damage at all points. It’s balls-to-the-wall Magic and you jam your best card and don’t look back. Force them to have it all—they usually don’t.

Hero’s Downfall is a good card to have against a flashed Pearl Lake Ancient or a turn-three Ashiok but in my eyes those are both bad cards in the matchup. Huey doesn’t want to have either in his opening hand and what happens in the first four or five turns of the game are what matters most. I think even in games where Ashiok and Pearl Lake Ancient turn out to be good cards, if I do have my Hero’s Downfall, it’s very unlikely to turn a loss into a win. A Hero’s Downfall in my opening hand could be any threat card, and when that’s the difference between a mediocre hand and a good hand, that’s also often the difference between a win and a loss. He can use Thoughtseize to take a good card and not play into a Downfall. It’s just almost always bad and an easy trap to fall into for inexperienced players.

In fact, Abzan Aggro will have an even better matchup against control moving forward with the reintroduction of Duress (I talk about this card a lot, I really like Duress). It’s not even clear that you would want Duress for the sideboard given that you already have Thoughtseize and you completely annihilate control decks.

That wraps up my foray into Running the Gauntlet with Abzan Aggro, up next for me is the Pro Tour and a new set, so once that’s on Magic Online I’ll pick a new deck to run through the new Standard gauntlet and see how my games vs. Huey go then!