If you’ve followed Modern Monday through its many iterations, you may remember that back in 2014 I played a version of Skred Red. That was when the deck was still fringe, and definitely before it won a Grand Prix in 2016. Man, three years ago—sometimes I forget how long I’ve been doing Modern Monday.

Truth be told, Skred Red is still a fringe deck despite winning one of the largest Premier Events in Magic. That’s unusual, but such is Modern it seems. Today I’m going to try out a list that Magic Online user JoshCrowe took to a 5-0 League finish.

I’ll be honest. The main reason I wanted to play this specific list was its single Obliterate. 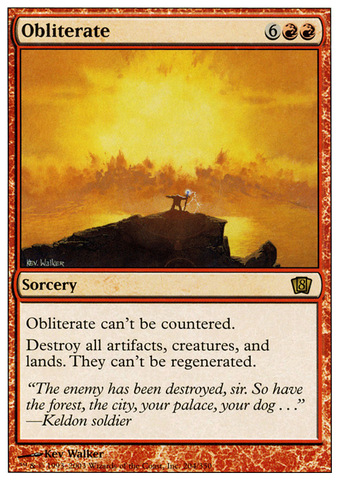 I thought if I could cast Obliterate just one time, it would all be worth it. You can tell that Skred Red has been evolving with the format, as it has new additions like Eternal Scourge (who saw that coming?), Pia and Kiran Nalaar, and Chandra, Torch of Defiance.

Skred Red is also one of the few decks that can run Blood Moon and Relic of Progenitus in the main deck: two cards that can completely shut down certain decks. In fact, Relic of Progenitus is even more useful than it seems, as it allows you to exile your Eternal Scourge after it dies to then cast it from exile.

One of my favorite parts about Skred Red, aside from its simplicity and Skred’s efficiency, is how customizable the deck is. Some versions have Demigod of Revenge. Some have Wurmcoil Engine. Some have Chandra, Flamecaller. This version opted for the newest version of the fiery planeswalker, as well as a copy of Sarkhan, the Dragonspeaker.

Real talk: I worry that the Eternal Scourge might be too cute. Skred Red is a control deck through and through, and as such I believe you want creatures (or planeswalkers) that can quickly close out a game. The Scourge tech is really sweet, but there are times you want (or need) to cycle your Relics, relegating the Eldrazi to a simple 3/3 that creatures like Tasigur, the Golden Fang or Gurmag Angler can easily get around.

Against decks with counterspells, Demigod of Revenge might be the best answer. Sure, they can counter the first one, but each additional Demon is going to be real trouble. Certainly moreso than Thundermaw Hellkite or Stormbreath Dragon.

I didn’t get to cast it, but the Obliterate might also be too cute. 8 mana is a lot, and while you do have Mind Stones, your mana would be better utilized two turns sooner on Wurmcoil Engines or Chandra Flamecallers.

As far as the sideboard goes, some of the 1-ofs are questionable. I love the idea of getting a Blood Moon or a Molten Rain out a turn earlier, but only have 1 Simian Spirit Guide out of the sideboard to accomplish this task seems a little suspect. Additionally, I also like the idea of shoring up the aggression, but the single Stormbreath Dragon might want some friends. The single Pithing Needle and Pyrite Spellbomb also make me wonder, as you don’t really have any ways to search these out. Is there a red Trinket Mage?

I’m always impressed with Skred Red and it fights on an axis that most opponents aren’t prepared for. Their threats and removal are also typically very good, and access to hoser cards in your main deck is a big perk. Truth be told, red is likely my least favorite color in Magic, but when I’m playing a control deck, that all changes. I love Big Red variants and, as such, I’ve pretty much always loved Skred Red. Give it a try—maybe you will too.