As you read this, you’re likely pouring over deck lists from events this past weekend that were utilizing new Aether Revolt cards just like I was. I can’t wait to tackle new Modern Mondays with new toys. 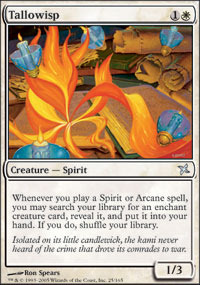 But for now we’re revisiting an old favorite from Kamigawa: Tallowisp! Yes, the 2-mana spirit with an affinity toward Spirits and arcane spells. It always reminded me of Zur the Enchanter, but a little more narrow and a little easier to cast.

The deck was piloted by Draccon136 to a flawless finish in a Modern League on Magic Online. Take a look.

You have about 7 targets to snag with a Tallowisp trigger, which is a good number. One thing I don’t understand about this configuration is having 1 copy of things like Eidolon of Rhetoric or Kataki, War’s Wage. These are Spirits, sure, but you don’t have a way to tutor for Spirits, just Auras. Do you just hope to draw them naturally? I guess we’ll find out!

I have a couple of deck building mantras that always manage to bite me when they aren’t followed. One I mention regularly is that I always want to have enough basic lands to cast my spells if a Blood Moon resolves. This means that if I have a Mystic Snake in my deck, I want to have at least 2 Islands and 1 Forest. That way, at least I have a chance to search them out and never have dead cards in my hand. While this deck is close, you can see that this isn’t exactly the case, and post-Blood Moon you end up not having a way to cast Angelic Destiny.

The other has to do with playing white and not including ways to deal with enchantments. Just… can we stop doing that? Artifacts and enchantments are a real thing in Modern and despite having Stony Silence, this deck doesn’t really have ways to deal with Ensnaring Bridge or Chalice of the Void. This deck is heavily reliant on 1- and 2-mana spells, so a resolved Chalice can definitely be a problem. 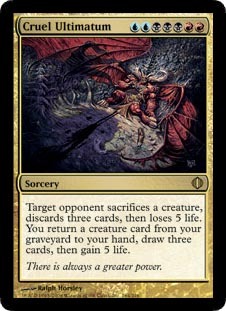 Another issue was that the deck doesn’t really have ways to deal with cards that cost more than 4 mana… you know, like Cruel Ultimatum or Primeval Titan. Both are outside the realm of what Disrupting Shoal and Spell Queller can handle. In fact, you have no real answer to them in the deck, which is awkward. You have one or two more answers in the sideboard, but there’s not a single way in the entire deck to stop a Primeval Titan from resolving short of paying 8 mana with Disrupting Shoal.

Those are some of the biggest holes I see, along with not being able to deal damage or gain life (when necessary) fast enough. I do think these are problems that you can shore up with some changes. Either way, I’ll have a deck with Aether Revolt ready as soon as the set is legal! Thanks for reading and I’ll catch you later!