Magic 2015 is on pace to go down as one of the greats. It’s got more people talking, drawn more excitement, and has more potential to impact Magic across broad formats than any set in recent memory.

Core sets are often maligned as merely a vessel for reprints—in the past this was true—but over the course of Magic’s history, base sets have done the most. They have been a time of rules change, card change, and design change. After all, Alpha was a base set.

Core sets are a chance for unveiling—of mixing the competitive with the flavorful, the new with the old. They are an opportunity to play classic-style Limited, and their release represents the period in which the Standard format has the biggest card selection, for the most powerful and consistent decks.

Even if I never play with these cards they always feel good to read. This card makes sense.

Imagine a Goblin coming through with a boiling pot of Vietnamese Pho. Nobody is gonna stand in the way. But if you poke the guy he gets KO’d via steam bath. OK.

But imagine Primeval Titan coming in with what, a giant cauldron of hot soup? Do I really believe Primeval Titan was cooking… or is the cauldron not to scale? But then how does it get killed by spilling the soup on itself? Questions beget questions.

Point is, these are the type of cards you get in a core set that you rarely get anywhere else—the souper flavorful.

It’s no secret that I’ve been sitting out of this Standard season and a lot of that is the inability to build a good ramp deck. We already have the odds stacked against us, fighting against Thoughtseize and Supreme Verdict with Sphinx’s Revelation, but the big issue has been with missing big top end ourselves.

There is potential for insane mana ramp in Standard.

We have Llanowar Elves and Sylvan Caryatid. 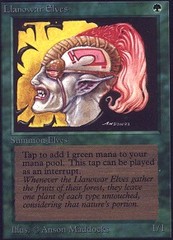 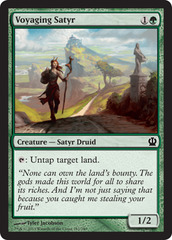 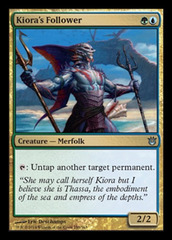 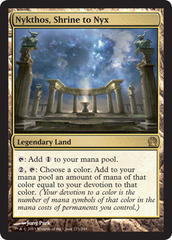 We can combo our ramp with Axebane Guardian or Market Festival. 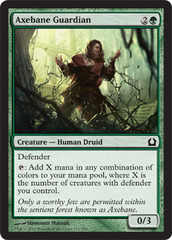 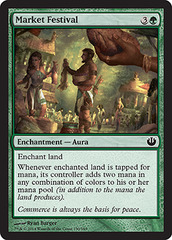 But we basically have nothing to ramp into. Garruk, Elspeth, and Primeval Bounty have been okay, but none of these impact the board nearly as much as Sphinx’s Revelation pulls you ahead off the board.

With Sphinx’s Revelation still the best high-end card, ramp has been kind of boring to me, but I’ve been waiting for the full sets to come out.

With that thought, I’ve been looking at M15 with my eye on fat. 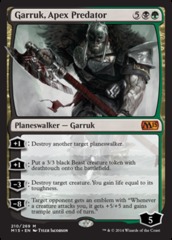 I don’t care what anyone else has to say about this card, it’s bonkers. It’s only the second 7-mana planeswalker and it feels like it. It’s Karn. It does everything.

It ticks up and improves board position, it clears out creatures, and it has an absurd game-ending ultimate in combination with the Beasts he makes.

This card makes me want to play Standard again because we finally have something cool to ramp into that no one else can use. This is a marquee ramp card, FINALLY, and I am going to play with it.

And then we have In Garruk’s Wake.

Finally a 9-mana effect competitive with Sphinx’s Revelation. I mean, it’s much worse in that you can’t scale it up or down, but it’s competitive because for 9 mana it has a devastating effect.

You can’t play too many of these, but in any Standard matchup where 9 mana happens this is a devastating top-end option. 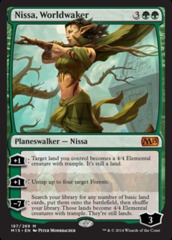 Here’s a way to get to 9 mana. This is another ridiculous Magic card, and I’m glad to see the cards slide the way of the good guys right now. Could this be another Green Summer?

Untapping four Forests is a ton. I mean, if we untap with her, we have SO MUCH mana, and the ultimate isn’t a kill but threatens a kill.

The amazing thing is that she protects herself immediately. Four mana lets you play a blocker or some kind of removal, and that coupled with 4 loyalty means this is likely to survive.

We need some kind of green/black fixing though… 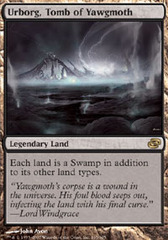 Urborg, Tomb of Yawgmoth is back. I love this card. It’s so awesome. It feels so black in the way that it fixes mana and all the other colors should be extremely jealous that only black has this effect as a land.

Urborg is a really hard card to build with—you can play it safe and throw in 1, or you could combo it with lands that aren’t supposed to make mana like Dark Depths and play 4. The risk is drawing multiples as it’s legendary. Depends on preference really.

Urborg could be annoying by helping Mutavaults cast Nightveil Specter, but let’s let MBC have its day in the sun. It comes around very rarely. If some of us have to tough it out until the fall, so be it. It’s worth it for Urborg being around later. 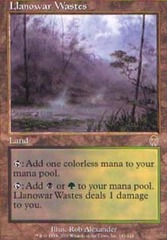 Okay we have the painlands back, which means now we have awesome mana for 2-color decks. So let’s build that ramp deck!

This is a pretty sweet ramp brew, that I may or may not put together in the future. Keep your eyes out.

Hushwing Gryff is going to have an immediate impact on Modern. First thing that comes to mind is a Torpor Orb version of Aven Mindcensor. Duh.

Aven Mindcensor is a pretty great sideboard card that even stars in the main deck of some competitive decks. Is it possible Hushwing Gryff could as well?

Maybe, maybe not. I mean, Hushwing Gryff is pretty brutal against Birthing Pod and needs to be removed by a Twin deck. Imagine a meta that is 50% Pod 50% Twin. Really inbred. Hushwing Gryff starts to become a great maindeck card.

If Hushwing Gryff is a great maindeck card, then suddenly Torpor Orb is in the deck and we’re building around negative comes-into-play abilities. 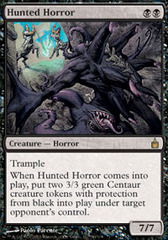 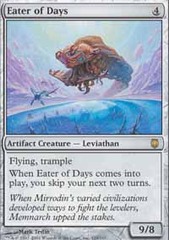 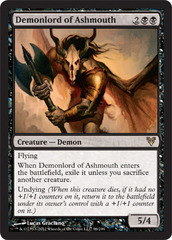 These are some egregiously powerful creatures if they lose their drawback. I’m inclined to build around them. I think it could be competitive, but more importantly I think it would be fun. I’m compelled to do it and sometimes that’s reason enough.

Here we have a really fast and aggressive combo deck that would be prime in a 50% Pod 50% Twin meta. Now, the deck is obviously super reliant on drawing one of our 8, but there have been many competitive tournament decks before in the same boat.

To do it in a Thoughtseize/Simian Spirit Guide/Dark Confidant shell is great. Among these are the best black cards in Modern and many successful decks are buoyed up just by this pack of disruption and draw.

I think the Temples are really good in Modern, especially until they finally print the enemy-colored tapped lands. For decks that don’t have a ton of turn-1 plays and are looking for specific cards, the scry lands are very good.

Living End, and Patriarch’s Bidding before it, have done so much work for me over my Magic career. Any kind of redux of this effect is worth studying closely.

In particular I think Return to the Ranks is superior to Immortal Servitude in a Zubera deck.

Now, this might not be that relevant to you, but it’s very relevant to me, and it’s even more relevant for the Zuberas.

Sometimes you need to put together a competitive Zubera deck:

The Aether Vials could be replaced by Springleaf Drum

Return to the Ranks is cheap to convoke with Dripping-Tongue Zubera and you can get all your guys back for a giant Zubera death combo finish.

I remember putting a deck like this together using lands like Vivid Meadow and Patriarch’s Bidding to rebuy. It wouldn’t necessarily be a good tournament deck but it’s a good type of competitive deck to battle noobs with casually. Sometimes you gotta sparkle without being too Spike.

There are so many more brews to come out of this set. I suspect I will be building for Standard more before the fall set comes in and rotates everything out. It seems like there are finally tools for ramp.

Meanwhile I’m going to keep at the Modern brews on account of it being an amazing format, but I’m also excited for new Modern implications with cards like Hushwing Gryff.

To end, I’ll say that I’m curious what cards you all are brewing around. Is there a card that puts helium in your umbrella? Does your pet brew get totally hooked up by the new set? I want to see lists people!