Hi everybody! Over Labor Day weekend, I won the Rags to Riches XXV Pauper tournament at Card Kingdom in Seattle with a deck I have been working on for the last month or so. Rags to Riches is one of the main paper Pauper event series running in the Northwest and we had 56 players for the event. The deck is not only a joy to play, but my results both from testing and the tournament make me think it has a chance to shake up the Pauper metagame.

What Does The Deck Do?

It has two complementary, powerful, and easy-to-execute plans, one of which is extremely consistent while the other is very opportunistic and can close the game quickly. The deck also has multiple cards that work across both plans and add to synergy and consistency. The raw power level of the deck is also very high, as it is full of downshifted cards and card advantage.

Plan A: Grind them out

This deck plays 20+ 2-for-1s (Rats, Ragers, Edicts, Death Denied), so the plan is straightforward and consistent. Most also impact the board and you can convert your softer 2-for-1s (the 1/1’s) into hard 2-for-1s either through Plagued Rusalka or chipping in enough damage that your opponent is forced to deal with them(this also helps your plan B). Death Denied also lets you go over the top of most decks in terms of card advantage, especially in matchups like Tron or Skyfisher/Astrolabe where they can largely keep up.

This is your primary plan going into almost every game; the deck is built to just naturally generate advantage while trading resources. You still end up dealing the final points of damage with Beetle a lot of the time, but it is your card advantage that has put the game out of reach for your opponent.

Plan B: End the game quickly and opportunistically with Beetle + Feeder

Mortician Beetle + Carrion Feeder kills very quickly and rapidly can grow outside the range of damage-based removal. Your win conditions costing 1 mana allow the deck to rapidly turn the corner and kill your opponent when the opportunity presents itself. In a lot of games, you will be trading resources and then see an opening to shift gears and present your opponent with a 2-turn clock. Because most of the fuel for Feeder already netted you a card, you can afford to be a lot risker about shoving all-in on Beetle and forcing your opponent to have an answer.

Against decks that cannot compete with you on cards, this is very much a secondary plan and you will see below that Feeder gets sideboarded out in many of those matchups. In matchups where your opponent can keep up, reading the texture of the game and knowing which plan to pursue is extremely important.

The deck is quite complex and to play it well you need to be very comfortable with the following:

I went 8-0-1 over the course of the tournament, playing against the following decks. You can find the rest of the Top 8 here.

Some things of notes from the games

Unearth was a 4-of for over half the time I have been playing the deck and was the third card I wrote down after Mortician Beetle and Carrion Feeder. Unearth seems like it should be amazing in the deck for both plans, but I eventually found it to be a win-more when you are going aggro and completely outclassed on power level by Death Denied when you are grinding. That combined with how tight the deck is outside its core eventually led me to cut them to make room for the second Death Denied and the maindeck Crypt Rats.

I sideboarded in at least 1 Crypt Rats in every single match over the course of the tournament. I came to Crypt Rats pretty late in playing the deck, a couple days and maybe 5 matches before the tournament. A sweeper initially seemed counterintuitive in a deck with so many creatures but seemed required to make the Elves matchup winnable. Not only does the card have utility there, but it also is excellent against the Moment’s Peace/Stonehorn Dignitary lock and go-wide decks in general. Rats also plays well with your sacrifice outlets, giving you and extra body to play with while the ability is on the stack.

Husk was originally in the deck because it needed a seventh sacrifice outlet. I wanted another free one, and it seemed powerful in a few contexts and I wanted to increase card diversity for longer games. I was also worried about the matchups where Rusalka was closer to Mon’s Goblin Raiders.

It turns out that the third Rusalka is where I think the deck wants to be. The situations I thought Husk would be good (blocking large creatures, clocking, against sweepers) ended up coming up less frequently than I thought or just not mattering that match. Rusalka, on the other hand, is the best card in your deck in some matchups and one of the better cards in most. It also turns out Mon’s Goblin Raiders that is actually fine! Sneaking in for 4 damage over the course of the game matters a lot for your clock. This also helps pick up a little slack from cutting Unearth. The deck also just plays out much better when you have a 1-drop creature on turn 1, and I wanted to go up to 11.

Adding a Swamp over Barren Moor

I am the least sure in this change. The deck feels like it might want another untapped land and adding the second Death Denied gives you another mana sink.

This has slowly gone from a 1-of in the sideboard to a 2-of main. In the context of this deck, Death Denied might be the most powerful single card advantage spell in Pauper.

I would never leave home without the full 16 and they are almost never sideboarded out. These are the core of the deck and the bridge between the deck’s plans. If future Dusk Legion Zealot versions are printed, it would be worth testing a 5/3 or 6/2 split with Burglar Rat.

Why no Gray Merchant?

While powerful, Gray Merchant does not fit either of the deck’s plans particularly well and 5 mana is very much the top end of the deck’s curve. You also tend to have little fuel for it as you are either feeding Carrion Feeder or trading resources. The deck absolutely needs a few lifegain cards, but Tendrils of Corruption is cheaper, impacts the board in a more powerful way and gains more life on average. With Crypt Rats now providing reach against locks and making Elves winnable, there is just no need or space for Gray Merchant.

You generally lose this matchup 1 of 2 ways: either you stumble on cards and they pull ahead or you take enough incidental damage that their fliers start to matter. Managing your life total is much more important in this matchup than in any of the others where your opponent can compete on cards.

There are two ways you lose this matchup: they assemble Tron + chain card draw or they lock you out. You can usually keep up on cards, but when they combine multiple pieces of card advantage with a large mana advantage you usually get run over. I tend to go all-in on Beetle in this matchup more than any others and it is imperative that you beat down as much as possible to force them to find Fogs over developing their own gameplan.

Game 1 on the draw is difficult, but things get much better after sideboarding. They can run you over quickly with Burning-Tree Emissary and both Pit Skulk and Rancor make your chump blocking a lot less effective. Tendrils of Corruption is your best card in the matchup. You can also blow out Savage Swipe with Tragic Slip here even if you don’t have morbid by knocking the creature targeted by Swipe off of 2 power. 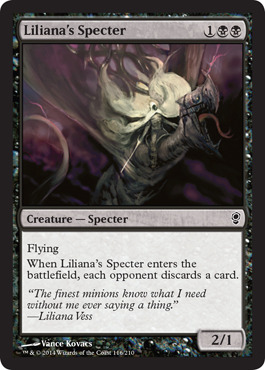 This matchup is pretty rough, and Burn’s growing popularity makes me want an extra lifegain card. Your ability to control the board with removal, Rusalka and dorks is much less relevant against Burn than other aggro decks, which makes stabilizing very difficult. This is the one aggro matchup where you tend to lean heavily on Beetle.

Game 1 is bad without drawing Crypt Rats. You must limit their output with Huntmaster, as well as killing Timberwatch Elf and Priest of Titania (turns 2-4) on sight. Huntmaster quickly pumps out bodies that go beyond even what Rusalka can keep up with, Timberwatch kills you very fast and Priest allows them to be more explosive than you can easily keep up with. Sweepers are the name of the game here and the matchup gets much better with access to 3.

Pretty similar to Stompy in most regards, although game 1 is a little bit better as they more frequently have a durdly draw. Your goal is to stabilize the board as quickly as possible while staying out of Galvanic Blast range until you find Tendrils. Post-board, there is a ton of stack trickery with Krark-Clan Shaman so you especially need to pay extra attention to on-board tricks, understanding priority, and clearly verbalizing actions in this matchup.

Plagued Rusalka is again key here, preventing them from locking you with Spore Frog. You tend to lean more towards beatdown in game 1, although in games 2 and 3 graveyard hate makes it pretty easy to outcard them.

Other Things to Explore

I have been messing around with an aggro variant of the deck with Sadistic Glee as Beetles 5-8 and Sultai Emissaries. I do not have nearly enough games with it to know if it is any good, but it seems worth putting some time into.

Lastly I’d like to thank the TO’s and judges for running an excellent event and all of my opponents for being pleasant, nice people.

Max has been playing off and on for 20 years, putting a lot of time into Modern and Pauper, including a Top 32 finish at GP Vancouver in 2017. He regularly plays and brews in Pauper around Seattle.