The people who follow me know that a couple of years ago, I made a rule for myself to never play control decks. It’s been one of the best decisions I’ve ever made.

I didn’t trust their decks and wanted to play Jeskai Control, blinded by the power of Torrential Gearhulk and Glimmer of Genius.

Lee Shi Tian made Top 8 with Mardu, and Eduardo Sajgalik and others put up insane results with U/W Spirits. I went 2-1 in Draft, 0-4 in Constructed, and was eliminated from the tournament.

That was the last time I played a control deck, and the last time I failed to participate in Day 2 of a Pro Tour or a Mythic Championship. I scored at least 6-4 in Constructed in the following 9 Pro Tours.

You could point out that the same event was won by Shota Yasooka playing Grixis Control in the finals versus Carlos Romao, who played a Jeskai Control deck made out of cards he owned in his binder. Those are just facts.

Yes, people have succeeded with control decks, despite my radical choice of cutting it out of my life. Today I’ll explain why it’s risky to register a control deck for a tournament with many rounds when you are playing against decks that you don’t know.

Scouting is the most important thing when playing a control deck. If you are playing a 10-person FNM event with your Esper Control deck and you know what everyone is playing, you are heavily favored over playing 10 matches on Arena where you don’t know what your opponent is playing.

Imagine you open a hand with three lands, Moment of Craving, Cry of the Carnarium, Kaya’s Wrath, and Teferi, Hero of Dominaria. You are going to keep it against any aggressive deck, but what if you get paired against Nexus of Fate, Wilderness Reclamation, or a mirror match? Your starting hand is reduced to a mulligan to 4. 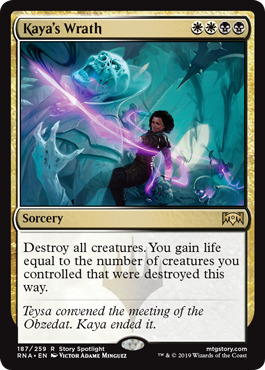 What if you mulligan to 6, and the scry card is a Kaya’s Wrath? That could be either the best card in the deck, or the worst. Or under the new rules, what if you have to select a card from your hand to put on the bottom of the deck and you are staring at the second copy of Absorb or the first copy of Cry of the Carnarium?

On the other hand, you see White Weenie and red aggro decks, or even combo decks like Nexus of Fate, that only make mulligan decisions based on their deck and how they want to operate, and not based on the unknown factor of what your opponent is playing.

Some may argue that midrange decks have a similar problem to Esper, but on a smaller level. You do have beatdown creatures in the form of Merfolk Branchwalker and Jadelight Ranger, but you also have Cast Down and Find // Finality that can range from A to F based on the matchup.

While that’s true, it’s to a lesser degree, so I’m fine taking my bad beats if I end up keeping a hand with two Cast Down against Temur Reclamation or Esper Control. Those are bad matchups game 1 anyway.

To continue the example of Sultai Midrange vs. Esper Control, we found the matchup very unfavorable game 1, but once Sultai started bringing in Duresses, Disdainful Stroke, Kraul Harpooner, and more, the matchup swung heavily in Sultai’s direction.

The way Esper fights sideboard hate is with a transformational sideboard plan with cards like Thief of Sanity and Hostage Taker, and hoping that their opponent will have sideboarded out their Cast Down or Lightning Strike so they can catch them off-guard. (On this matter, I would like to remind you not to board out Cast Down vs. Esper with Sultai. Board in the fourth one!) 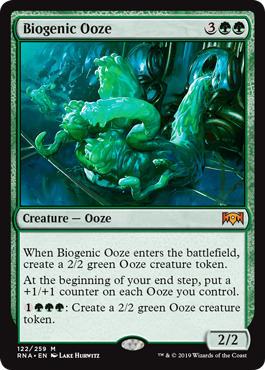 The same thing goes for U/G Nexus and Temur Reclamation. Biogenic Ooze is one of the few ways they can get around the hate of Duress and Negate coming in from Sultai. (On this point, play Disdainful Stroke over Negate in your Sultai deck!)

Best-of-one Standard is a different story and a different format. It is very new and there aren’t that many natural predators to control decks yet, especially since the banning of Nexus of Fate, which makes Esper Control a super good choice and most likely the best deck in that single format.

Let’s look at Legacy, and whether control decks have the same problems.

Andreas Petersen (Ecobaronen) is my go-to guy for any Eternal format. He is probably one of the most successful players on Magic Online between Legacy and Vintage Challenges, and last weekend at the Legacy Playoff he decided to bring good old Grixis Control.

When Deathrite Shaman was around, he and I were big fans of 4-Color Leovold, which was basically Grixis Control with a green splash for Leovold, Emissary of Trest. Now the fourth color has been removed, because without Deathrite Shaman, it isn’t that easy to fix your mana anymore, and you are much slower, having lost a powerful 1-drop that could have helped you keep up with other strategies.

That’s why I don’t think Grixis Control is good in Legacy anymore. The deck has lost speed, and Kolaghan’s Command isn’t as appealing when you can’t deploy your mana quickly like before.

On top of that, the deck has the same mulligan decision problems as control decks in Standard. But not only in opening hands (that could be fixed with Brainstorm)—even which cards to keep with Brainstorm and Ponder, and which ones to shuffle away. Are you going to keep Fatal Push against Ad Nauseam Tendrils? Are you going to shuffle Kolaghan’s Command versus Chalice of the Void? Those are game-changing decisions that can turn a win into a loss.

On this matter, Jonathan Sukenik, long time and successful Legacy player, opened my eyes to how much he hates Fatal Push—or any removal that can’t go to the face—in the main deck of decks like Grixis Delver, because you need to be able to cast 100% of your cards in a tempo deck like Delver.

That’s it for today. Now I’m going to go back to the Standard best-of-one queues because this weekend is the Mythic Invitational at PAX East. Don’t miss it!