Regular readers may have guessed that I would be the author from the title alone, and they would be right. I like tinkering with mana bases and running the numbers, so I was delighted to see a card in Modern Horizons that allows me to do both. 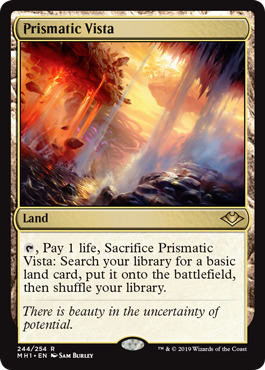 Prismatic Vista is basically an Evolving Wilds that puts the land into play untapped at the cost of 1 life. That’s usually well worth the cost.

But Evolving Wilds never saw a lot of play in Modern. Will things be different for Prismatic Vista?

Besides budget reasons, there are several decks where Prismatic Vista might be better than “actual” fetchlands. For example:

The Mathematical Value of Deck Thinning

Fetching a land from your deck slightly decreases your chance of drawing another land in subsequent draw steps, thereby lowering the probability of flooding out. But it also comes at the cost of a point of life. Is it worth playing or using a fetchland for the sole purpose of thinning your deck?

As always in Magic, the answer to this question is “it depends.” But let’s do a thought experiment to gain some intuition. Consider a 60-card mono-color deck with 24 lands. So we’re fetching only to thin our deck, not to fix our mana. We keep an opening hand with three lands and four spells on the play. Since our curve is relatively low, any additional land we would draw in this game is dead—we are only interested in drawing spells from now on. This is a strong assumption. Most decks will have some use for excess lands. But in this thought experiment, we set the value of any land beyond the third to zero.

So after five draw steps (or more generally, drawing five cards, possibly via cantrips) we have drawn 0.058 extra spells in scenario B compared to scenario A. That’s approximately 1/17th of an extra spell. Is that worth 1 point of life? Well, if we’re playing against a combo or control deck, then it probably is, as our own life total would be close to irrelevant and any small boost in the number of expected spells helps. But if we’re playing against another aggro deck, then it probably isn’t, as that single point of life may make all the difference in a damage race. So it’s all dependent on the matchup.

Another thing to consider is how many cards you expect to draw in any given game. If you’re playing a high-velocity deck that tries to draw a lot of cards, then you may see a large portion of your library in any given game, at which point the fractional extra spell might be worth the life cost.

If you want a general guideline answer, then I would say that one card is worth four points of life, either paid or gained. In some matchups it will be more, in some matchups it will be less, but this 4:1 exchange is based on Sylvan Library. It’s also seen on Ojutai’s Command and Demonic Pact if you consider all non-losing options to be of equal value. And it’s the same card-life exchange in escalating Collective Brutality. If you agree that 4 life = 1 card, which implies that 1 life = 0.25 card, then the above chart shows that you need to draw 22 cards before you’ve recouped your investment, at least in the specific scenario I set up under my assumptions.

And 22 draws is a lot. While there are Modern decks that sift through half of their library in an average game, these decks are rare. For most decks and matchups, playing Prismatic Vista with the sole purpose of thinning your deck is not worth it, as the price of paying 1 life usually exceeds the benefit gained.

Yet there are exceptions, and one way or another, fetching to fix your mana remains worth it. I expect that Prismatic Vista will be one of the most sought-after cards from Modern Horizons.