Fact or Fiction is a beautifully designed card. It effectively embeds a combinational partition problem into an extensive-form game, which is my way of saying that it’s a good skill test for both players. I was excited to see that the iconic card would enter Modern through Modern Horizons.

It is time for Fact or Fiction game!
FACT: I love Nutella
FICTION: Some people hate Nutella
FACT: Always choose the biggest pile after playing this card
FICTION: Counter this card
Thanks @wizards_magic for letting me preview Modern Horizons FACT OR FICTION! #MTG #ModernHorizons pic.twitter.com/WuiD2rKAmk

Back in 2002, when Carlos Romao won the World Championship, Fact or Fiction was one of the most powerful card advantage spells around. It even spawned its own acronym: EOTFOFYL, that is, “End of Turn Fact or Fiction, You Lose.” That was a bit of an exaggeration, especially since Romao’s strategy was to not counter Fact or Fiction in the Psychatog mirror match. But splitting Fact or Fiction used to be an important skill. 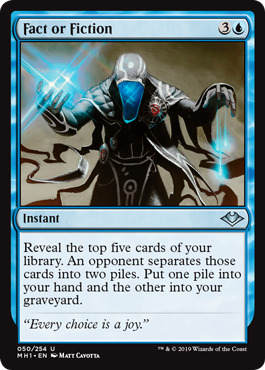 How Should You Split Fact or Fiction?

How do you split it?

Well, one approach is to assign a number to each card that represents its value in the game. This valuation greatly depends on the game state at hand, but let’s suppose you give the following values:

Suppose that your valuation matches your opponent’s. This would be reasonable if both players are experienced in the matchup and you have seen your opponent’s hand with a discard spell. Given this, can you find the optimal split into two piles?

A general approach to solve this is to consider all partitions, i.e., all ways to split the five cards into two piles. (In general, there are 16 of them.) For each partition, you determine the sum of the values in the first pile and the sum of the values in the second pile. Subsequently, you take the maximum of these numbers, which represents the value a rational opponent will get from their best pile of that partition. Finally, you choose a partition where this maximum is minimal.

Applying this approach to the five cards shown above yields a unique solution: ‘Path to Exile + Cryptic Command’ vs. ‘Path to Exile + Island + Plains’ Both piles have a value of 11. Assuming your opponent agrees on the values you assigned, they will be indifferent as both piles are equally good to them. That’s perfect.

This Approach is Useful, But Too Simple

The above model (of assigning values to individual cards and considering the sum) is a simplification of the real-world situation. Some of the relevant elements that are not included are:

Given these issues, the combinatorial partition-based approach I started off with doesn’t always yield good results. What’s more, assigning numerical values takes time, and explaining to a judge that you’re using dynamic programming to solve an NP-hard problem is not going to get you out of a slow play warning. Back in the day, when I got my best Pro Tour results, I found that two guidelines often gave good Fact or Fiction splits, especially against control decks. I often tried to force my opponent to make a difficult choice by splitting Fact or Fictions into ‘lands vs. spells’ or ‘4 cards vs 1 card.’ Let me explain why and when you should use these approaches.

The idea behind the ‘land vs spells’ split is that your opponent often wants to get a card from both categories. Especially early game, mana-hungry control players usually want both lands and spells. If they can indeed get a land and a spell, then are guaranteed to hit their next land drop and have at least one extra spell to cast.

When you force them to make a choice between lands and spells, you effectively break up that synergy. By splitting the original example into ‘Island + Plains’ vs. ‘Path to Exile + Path to Exile + Cryptic Command,’ they may be faced with a difficult choice between possible mana flood and mana screw, and this can give you the best chance to win.

Four Cards vs One Card

The idea behind the ‘four cards vs. one card’ split is that your opponent may have to discard next turn if they pick the pile with four cards. If your opponent already has five or six cards in hand, is land-light, and flips over one card that is particularly strong, then a 4-1 split usually leads to a far more difficult choice for them than a 3-2 split.

In the original example, if Cryptic Command would be particularly good against you, then this might lead to ‘Island + Plains + Path to Exile + Path to Exile’ vs. ‘Cryptic Command.’ So the idea is to identify the strongest card and place that in a separate pile by itself. Then your opponent can choose between going up only one card or having to discard to hand size.

These two approaches don’t apply universally of course, but they are useful to add to your repertoire.

Fact or Fiction is Fringe-Playable in Modern

The most recent Modern Challenge on MTGO, which was the first high-level tournament where Modern Horizons was legal, was won by W/U Control featuring one copy of Fact or Fiction.

A one-of Fact or Fiction makes sense to me: many U/W Control decks played a one-of Hieroglyphic Illumination in the past, and Fact or Fiction is a nice replacement. Especially since Fact or Fiction doesn’t say “draw cards,” and Narset, Parter of Veils is getting more and more popular in Modern.

A heavier reliance on Fact or Fiction might also be possible, but that will probably require a rebuild of the deck. You can only afford so many 4-mana spells, after all. I can imagine a differently built U/W Control deck that eschews Jace, the Mind Sculptor and instead relies on Cryptic Command and Fact or Fiction on turn 4. With this setup, you could pass with 4 mana open, and if your opponent doesn’t play into your Cryptic Command, then you can punish them with Fact or Fiction. That may be worth trying, but the ability to play turn-4 Jace with Force of Negation protection may be too good to pass up.

No matter where the card ends up, Magic has changed quite a bit in the 19 years since Fact or Fiction was first printed. It is not the powerhouse spell that it once was, especially when you put it in the context of the powerful Modern format. But I’m glad that the card is already seeing some play, and I look forward to the challenge of splitting Fact or Fictions in future Modern tournaments.