Generally speaking, I try to remain in the bubble as long as I can during MTG spoiler season. In most cases, I prefer to avoid as much as possible until I can view the complete spoiler in context.

With that being said, I don’t stick my fingers in my ears or bury my head in the sand when things start to show up on social media. With that said, I’m excited about one particular card:

I look at a card like Dovin’s Veto and the first thing I think is “now this is a card I will be playing with for the next ten years.” Obviously, the card draws comparisons to both Negate and Countersquall. 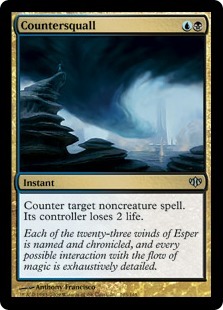 Negate is one of the sideboard cards I’ve played the most over the years since it was first printed in Lorwyn block. I’m all about countering noncreature spells for 2 mana.

Personally, I’d rather have an Dovin’s Veto than Countersquall, although it’s rare you’d ever need to choose between the two since they are different colors. The key is that I believe the uncounterable clause is significant.

The awkward thing about previewing a card like Dovin’s Veto is that it isn’t a flashy, bomb threat that people will build new decks around. It’s a better Negate that only U/W decks can use.

Negate is one of the cards I’ve registered in my sideboards across all formats the most over the years. A better Negate, that goes into U/W decks (which I like to play), is a highly significant printing. The other part of Veto people may underestimate is that the card will impact all formats including Vintage and Legacy, since this card has fantastic applications in Eternal.

Don’t get me wrong, the card will see significant sideboard play in Standard and Modern as well, but the Eternal stuff intrigues me most.

The reason I find the card so interesting in Eternal is its ability to completely trump two specific types of counter war.

Stopping an Opponent from Resolving a Key Bomb

Legacy Show and Tell and Vintage Paradoxical Outcome are the two best examples of this dynamic. The opponent needs to resolve their busted card to win and plans on fighting a counter war to force it through.

In the past, Flusterstorm was the trump card for winning those battles. But no amount of Flusterstorm can push a bomb through a Dovin’s Veto. Now, simply having a Veto will in most cases force the combo deck to present the combo twice.

If you really want to beat a Veto in a counter war, consider Misdirection in Eternal. You are able to respond to Veto with Misdirection and change Veto’s target to Misdirection. The Misdirection will resolve, and then the Veto will fizzle because it has no legal target (resolved Misdirection).

Protecting Your Own “Stuff” From Opposing Removal

Dovin’s Veto isn’t as good at forcing your own spells through as it is at stopping an opposing threat.

I play Dovin’s Veto on Counterspell.

It’s just a Negate in this situation. But it has a ton of value when protecting your cards that are already in play. For instance, imagine you have a bunch of creatures already deployed and your opponent miracles a Terminus…

You can simply fire off your Dovin’s Veto and there isn’t much your opponent will be able to do about that. In addition, it’s a great way to protect other high powered permanents: 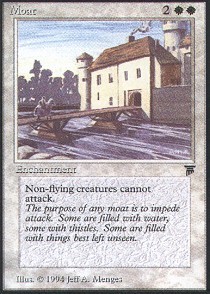 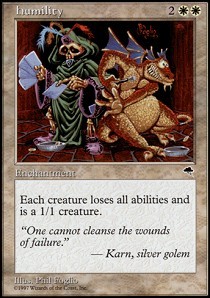 Once you’ve managed to get that strategic trump card into play, there are many cases where your opponent simply must answer that card or lose to it. In a situation where they may only be drawing to a handful of Council’s Judgment or Disenchant, it’s a big deal that Dovin’s Veto prevents an opponent from ever winning a counter war over these game-deciding interactions.

The same types of interactions are also relevant in Standard and Modern. In fact, I think the existence of the card will likely force me to play a new Standard deck! I’ve been playing Gates Reclamation Combo with four Negate to stop other counterspells. It’s a big problem for a deck like that if the various Esper and U/W Control decks have uncounterable Negates to stop Expansion // Explosions or Reclamations.

Modern also has combo decks that can fight over their bomb, although it’s much less common than in Legacy. Modern is in a weird place because Izzet Phoenix and Dredge are both busted in half, but assuming that is fixed at some point, there have been decks that play bombs and protect them with counterspells like U/G Scapeshift, Through the Breach, and Jeskai Ascendancy. Against these decks that are trying to resolve a specific noncreature threat to win the game, Dovin’s Veto will be an ace. And it’s not like the various U/W Control decks have to give up anything in order to play the card, since they were likely already playing Negate anyway.

I also love putting a card like Dovin’s Veto into a set that has 36 planeswalkers! Since the only way to effectively deal with a planeswalker without losing value on the exchange is to stop it from entering the battlefield, it will be nice to have a card like this in the mix (albeit, only U/W Mages get access).

I look at a card like Dovin’s Veto and while it seems relatively simple and straightforward on the surface, it creates a whole depth of complexity surrounding matchups and interactions that will frequently come up. It’s a card I’m fairly certain I will be casting for years to come.