Hello friend, and welcome to Voyaging into Vintage a 4-part mini-series to give you an overview of vintage and perhaps persuade you to give it a try. In this first part we will just be covering what exactly vintage is, how I got started, some common misconceptions, and finally the best ways for you to start once you are interested.

So, what exactly is vintage?  Simply put Vintage is a constructed format where with a small banlist (consisting of Shahrazad, Falling Star, Chaos Orb, the conspiracies, Ante cards, and good ol’ Lurrus, of the Dream Den) every other card is legal. That’s right, every other card in magic from 1993- today. There is only a restricted list where cards are limited to 1 copy. So, if you are burned out on Pioneer and want a place to another play those Deathrite Shamans, welcome friend, we are glad to have you. Or how about that Fastbond you bought for commander, only to find out it was banned? Don’t be bummed, instead grab 3 more copies (if you want) and come join us in this fantastic format. 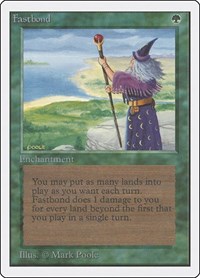 With that out of the way, I am going to talk about myself and what got me into Vintage, so you can see it’s not as scary as some might assume. I have been playing magic for over 13 years now, but I mostly played Standard, Commander, and kitchen table, until a few years ago when I decided to check out competitive magic. I started with Modern, and then eventually bought into legacy (Death and Taxes was my first deck in case anyone was wondering.), but I have always had a fascination with any format I didn’t play. My big turning point came after buying my first piece of power, which was a Timetwister, that I had purchased for commander. From there my friends who were already vintage players, or getting into it convinced me to proxy up a deck. I thought there was no way I would ever buy into the format; it can’t be that fun right? I must tell you folks those games I played were some of the most fun games of magic I have ever played. The interaction, the combos, the back and forth, it was enough to rope me in. 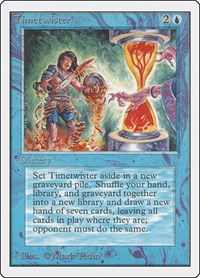 Then this whole global situation started happening, suddenly I found myself missing paper magic (as most of us do). I tried MTGO and MTGA, but it just wasn’t the same for me. My buddy then told me about a paper discord, and they were holding a webcam tournament the following weekend and they allowed up to 15 “playtest cards” aka proxies. I decided to build a deck and was able to come in under the 15 proxies and had a cheap webcam so I played thinking it would be fun. I ended up meeting some of the nicest magic players I have ever met. They were all just happy to play, to talk about magic, and have contact with other people. I even had one guy take me on a virtual tour of his property, and we talked food until the next round started. I ended up making the top 8 of this event. Keep in mind this was my first ever vintage tournament. Another Discord held a vintage tournament the following week and I made the finals of that one, and again just phenomenal folks. From there, this became my favorite format, both by having the most powerful cards, but also having a big community that feels more like everyone is an old friend who you haven’t seen in years and you are just catching up while slinging some cardboard. Thanks to selling off a bunch of cards I don’t use, I was able to buy into my deck since those days. You would be surprised what selling off a bunch of modern decks you don’t play can get you.

So now that you know about me, let’s talk about the common misconceptions I hear a lot, and read a lot online when it comes to vintage: 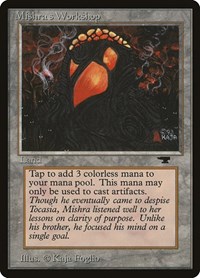 Vintage is expensive: While this can be very true, it doesn’t have to be. Much like Commander, Legacy, or even Modern, you can play Vintage on a budget. Now you can play on a budget, and a lot of popular modern and legacy decks can be ported over to vintage without breaking the bank (article coming on that soon). Now don’t get me wrong since the power 9, Bazaar of Baghdad, and Mishra’s Workshop all exist in this format; decks do tend to have 4 to sometimes 5-digit price tags but that shouldn’t scare you. If you are curious about trying this format out, I recommend trying it in paper with proxies and see if you enjoy the format. Find some people online who want to play or see if your buddies want to try it out too. If you end up loving it, just start saving and next thing you know you can get your first piece of power, or Bazaar, or what have you.

Another great way to start is with MTGO (Magic: the Gathering Online). This has the huge benefits of both being cheaper and having on demand games. It doesn’t quite scratch that itch of paper, but it is a great way to test out decks, learn the format, and get it on a budget as all the reserve list cards that are 3+ digits in paper, tend to cost a fraction of that online. Plus, like I mentioned, there are on demand games. So when that vacation hits and you can’t go anywhere, you can fire up Ol’ Modo (as some people still call mtgo), and jam a few free games in the practice rooms, or play a league or 2, all from the comfort of your own home.

Vintage players are all snobby and I won’t be welcome: This is a rumor I wish I could scour from existence. I would have thought the same thing back in the day, but honestly, it’s the opposite. Vintage players, for the most part, are just happy to have folks to play with. There are a few “elitists”, but in my time playing I have yet to meet 1 person who thinks they are better than anyone else because they don’t play with proxies, or they have been playing since Alpha. I have played hundreds of players over several continents (Webcam Magic is great for this), and everyone is just happy to talk about vintage. They are happy to help make suggestions for your deck when asked and are just genuinely happy to see others join the format. If you do meet someone like that is acting superior, know it’s the exception and not the rule.

Vintage is a turn 1 format with a lot of non-games: This is actively not true. While just like Legacy, and even Modern to an extent, there are some decks that can kill very early on. Most of the time though, with the help of cards like Force of Will, Force of Negation, as well as taxing effects like Sphere of Resistance the amount of turn 1 wins are very scarce. It is possible, but I play more back and forth games that can last as long as the average game of modern than I do dying in the first 3 turns. There are decks that can kill in the first 3 turns, but most of the time, in my experience, games tend to go on for awhile with plenty of back and forth and interaction. More times than not if the game is over on turn 1 it’s because one player played a lock piece (a Null Rod effect, or a Trinisphere and the other player could not play through it. It is far more likely your games will go longer and there will be a lot of magic played. 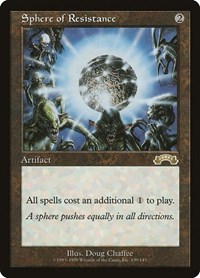 I do want to make one clarifying point here. I talk a lot about proxies in this article and probably will in subsequent articles. When I talk about proxies, I am speaking about non-counterfeit cards. My proxies are almost always printed cards that I put over cards in sleeves, or just a hand drawn piece of paper with the cmc, name, abilities, and a terrible rendition of the art (I am not a great artist, but that’s half the fun). I tend to lean towards the paper printed ones, as I play a lot over webcam and need my opponent to know what cards I am playing. Some artists do offer renditions of the cards as well that look nothing like the original but have the name and some great artwork and I have a few of those. Whatever method you choose, please do not use counterfeit cards. Counterfeit cards are in no way beneficial to the game.

So, as we wrap up part one, I hope I have at least piqued your interest in trying this format out. If you have questions or just want to see games being played there are a few discords out there, and I know there are some great YouTube vintage content if you just are curious how games look. You are also more than welcome to reach out to me on twitter (@Gloriouswolfman) or DM me and I would be happy to provide feedback or resources for whatever you may need. Next article we are going to talk about vintage decks and the pros and cons of the big archetypes.

Kaleb (AKA Gloriouswolfman) is a magic enthusiast and loves all formats, but has really found his home in vintage. His favorite color in magic is black and firmly believes that pile people call the “graveyard” is just an extension of his hand. Also a level one judge, and is proud holder of the title “That judge with the hat” at most local events.