Welcome back to Valuable Lessons. When Magic 2015 was announced, a lot of people were excited about Chord of Calling. Sure, the card is a Modern staple with huge implications for creature-based combo strategies, but would it be good enough for Standard? Initially, I thought it wouldn’t. In a format like Modern, we can sometimes Chord up a creature that costs one or two mana and win the game as a result. We can break up combos at instant speed. In Standard, it felt way too overcosted to matter. My opinion quickly changed after a conversation with occasional Pro Tour competitor Matt Ferrando.

I arrived at the site of Grand Prix Portland with a few hours to kill. Ferrando was looking for someone to grab lunch with, so we embarked on a quest for food truck action. While on the walk, Ferrando lamented his deck choice at the previous weekend’s Pro Tour. He played Blue Devotion and felt like there was too much spot removal in the room for the deck to do well. He asked what I would’ve played at the Pro Tour.

“Some Green Devotion variant. I’ve been playing those decks a lot since last fall and I feel like they’re great in the current metagame,” I replied.

Matt inquired further, “Would you play Chord of Calling?”

“Not a chance, the card is way too overcosted to matter in Standard.”

Matt shrugged, “Yeah, it’s probably not great in Green Devotion. I think people are trying to do the wrong things with it in Standard, though. Why aren’t people trying to find Fanatic of Mogis or something out of a Red Devotion deck?”

“Yeah, and you could play Purphoros and Chord up Hornet Nest to take people on a tour of blowout city.”

I wasn’t excited about Chord of Calling for Standard, but now I find myself actually salivating at the prospect of the best/most comboriffic Red Devotion deck anyone has ever seen.

When building a deck like this, I can’t help but be reminded of the Boggart Shenanigans deck that Sam Black used to win a car at Worlds in 2007. I want a creature-based deck that discourages the opponent from attacking us while periodically taking huge chunks out of the opponent’s life total.

How will we gum up the ground? 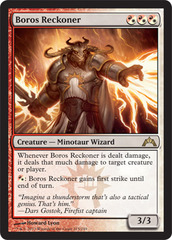 Boros Reckoner is the best brick wall available in Standard. It’s pretty hard for decks like Green/White Aggro to attack into it without a Reckoner of their own. Reckoner is also very difficult to block, so we’ll likely be able to punch through at our opponent’s life total enough to make our Fanatic of Mogis and Purphoros triggers into lethal prospects as the game goes long. The card also has a great interaction with Domri Rade, often allowing us to kill multiple creatures with a single activation. 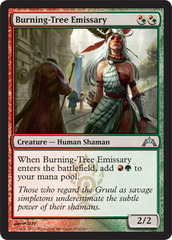 Burning-Tree Emissary is the perfect card for a deck like this: It gives us devotion for Nykthos, Shrine to Nyx, Purphoros, God of the Forge, and Fanatic of Mogis. It combos nicely with Chord of Calling. It puts early pressure on the opponent and lets us turtle up against opponents that are trying to apply quick pressure with cards like Goblin Rabblemaster. 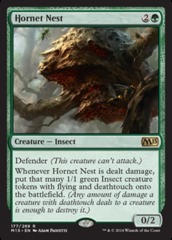 Hornet Nest is going to be a blowout here in a lot of situations. We can use Chord of Calling to put it into play at instant speed. We can also use Domri Rade to make a lot of tokens if we happen to draw it naturally off the top. It’s also a beautiful roadblock that will discourage opponents without spot removal from attacking us. 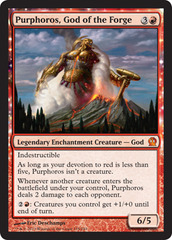 Purphoros, God of the Forge will often be a giant attacking body in this deck, but even when it isn’t it provides a constant stream of damage and a nice anthem activation to go with our army of Hornets.

Xenagos, the Reveler is great against black decks and Sphinx’s Revelation decks. I wanted to fit a few copies in the main, but I’ll definitely be able to side up to four in those specific matchups. Planeswalkers are very good in this deck because our opponent will be discouraged from pressuring them by cards like Boros Reckoner and Hornet Nest. 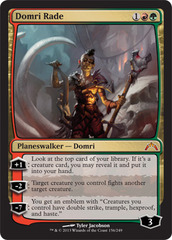 Domri Rade is an obvious four-of here. We’re playing Boros Reckoner and Hornet Nest, so we’ll be able to combo it with relative consistency while it refills our hand in the appropriate matchups. It won’t be unusual to ultimate Domri if we have enough to draw the game out. 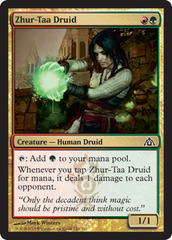 We need efficient ways to affect the board in the early game besides Burning-Tree Emissary. Zhur-Taa Druid is a great way to accelerate our mana that can also be cast off of Burning-Tree Emissary mana. It also fits the theme of passively pinging away at the opponent’s life total while building to big interactions. 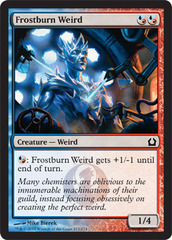 Frostburn Weird is a must-have in any Red Devotion strategy. Especially when we’re trying to slow the game down. 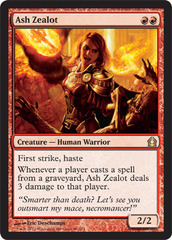 Ash Zealot is another RR card and will essentially be filling the void as Frostburn Weird number five.

I’m also going to try a singleton Hornet Queen as a game-ending topend that combines well with Purphoros, God of the Forge.

Here’s what the deck looks like when we put it all together!

This is a great starting point to a new deck concept that looks like it has a ton of potential in the new format. The deck punishes Sphinx’s Revelation and black strategies with planeswalkers and beats creature decks with Hornet Nest and Boros Reckoner. I’ll continue working on this in coming weeks and include updated lists in future columns.

I’ve been playing a lot with Green Devotion recently and you guys deserve an updated list. The more I play with the deck, the more I find myself wanting additional copies of Nissa, Worldwaker. The card is simply tremendous. It matches up well against such a huge portion of the metagame, especially now that blue/white and black variants are so popular.

Green Devotion is a deck that doesn’t get enough traction considering how strong it is in the current metagame. The new version of the deck is great against such a massive portion of the decks we’ll have to play against. I stole my updated mana base and the inclusion of Xenagos, God of Revels from Tzu Ching Kuo, but I also went up to three copies of Nissa, Worldwaker after recognizing how strong the card is in this deck.

This deck is incredibly well positioned in the current Standard metagame. It does serious work against white/black, it’s strong against Rabblemaster Red, it has game against blue/white control variants, and it’s even very strong against decks like Green/White Aggro. Blue Devotion can be a problem, but I don’t think that deck will be very popular immediately following a Pro Tour being won by a deck that’s basically just a pile of wraths. I strongly recommend this deck to players looking for a competitive choice in upcoming Standard events. There’s a lot of room for improvement in the Chord of Calling combo deck, and that deck could be quite strong with some testing, but this version of Green Devotion is a great deck for the current metagame.

Join me in future weeks as I continue exploring the new Standard format as it develops in the wake of the Pro Tour!