When Gate to the Afterlife was spoiled in Amonkhet, people were of two minds about it. They didn’t know what God-Pharaoh’s Gift actually was. When it turned out that we wouldn’t see it until Hour of Devastation, that set up a bit of intrigue that lingered. Was this going to be a good enough card for Constructed if Gift was good? Was this a plant for a future Limited archetype? Then God-Pharaoh’s Gift was revealed and… well, it got a little bit of press, but not much interest.

God-Pharaoh’s Gift gives you a creature recursion engine, one that can both pressure and generate card advantage. It has a built-in drawback to prevent infinite recursion, but you really shouldn’t ever need it in a good Gifts shell.

Meanwhile, Gate to the Afterlife can not only tutor for Gift, but cheats it directly into play. I cannot stress how impactful this is and how powerful it makes the midgame of the deck.

It shouldn’t be a surprise that after the popularity of U/W Monument decks, a similar strategy utilizing a different engine started to perform well. Both decks consist of a lot of synergistic creatures attempting to win via powerful artifacts and a grindy beatdown deck as a secondary win condition. After winning the Magic Online PTQ last weekend and some showings on the SCG circuit, God-Pharaoh’s Gift went from novelty to legitimate strategy.

The combination of Champion of Wits, Minister of Inquiries, and Strategic Planning makes it easy to get 6 creatures into the graveyard by turn 5 or 6. It also allows you to abuse Refurbish as a secondary way to utilize God-Pharaoh’s Gift or cheat out a Cataclysmic Gearhulk to buy time. The deck is very good at sifting for what it needs early on and has a lot of built-in redundancies that make it more than a gimmick.

Looking closer at the creature selection, you can see that the primary criteria is that it serves the plan of the deck (either filtering or buying time) and is still good when you bring it back via Gift. In fact, cards like Champion of Wits and Angel of Invention get downright nasty when brought back via Gift. Angel in particular can become a bigger Baneslayer Angel or an Exalted Angel crossed with Broodmate Dragon.

Cataclysmic Gearhulk has typically been too low impact to really show up in Standard, but with the Monument deck’s popularity it ends up being quite valuable. Having the equivalent of a wrath effect that you can main deck is quite important in the current Standard, especially with Monument decks being so popular. Clearing out all their token friends and then overwhelming them with larger creatures is one of the primary ways you beat them. 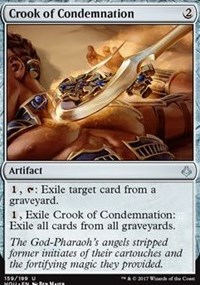 The deck isn’t unbeatable by any stretch. As with any deck that relies on early filtering, you can easily draw the wrong sets of cards early and be left holding the bag as mono-red runs you over. Other decks can also stop your engine via graveyard hate or Spell Queller, making decks like U/W Flash or Monument obnoxious post-board. Expect to see a lot more Crook of Condemnation as this deck grows in popularity. While you can still win the games where people start off with it, not having access to your primary or secondary engine makes for a rather weak deck.

One card to help against mono-red could be Sunscourge Champion, which can gain a fair bit of life and trade early. While it does die to Incinedary Flow, and both Earthshaker Khenra and Ahn-Crop Crasher can blow by it, as far as life gain goes it is one of the better options. The eternalize is cheap enough to get the trigger without relying on Gift. I would recommend adding more early interaction and life gain if you plan on jamming Gifts decks on Magic Online. Mono-Red is so popular now that your odds of hitting multiple times in League play have gone up dramatically over the last week.

I have to say that I really like that this type of strategy can exist without being overwhelming. We’ve had a streak of busted colorless cards in Standard and while this engine is powerful, it requires some build around and isn’t nearly as resilient as the energy package made Aetherworks Marvel. It also requires time to actually overpower your opposition, which means that artifact removal and hate cards can be effective. This also may not be the only way to build the deck—U/B or Esper Gifts seem like obvious places to look next. Cards like Ruthless Sniper and Hollow One seem very effective at giving you some early interaction while you set up.

Another possibility is to hybridize the deck with cards like Prized Amalgam, Haunted Dead, and Scrapheap Scrounger.

With the Pro Tour coming up this week, I’m looking forward to seeing if this deck can hold up against a field of streamlined threats or if the more bog-standard U/W Monument and Flash decks end up being the better choice.