After many years, we have another silver-bordered set! Unstable will be released on December 8, featuring questionable science, references to other games, and other weird experiments. The cards can’t be used in regular tournaments, but they’re awesome for casual play… and for over-analytical mathematicians.

I already ran the numbers on the white, blue, and black cards and did the math on the red and artifact cards. Today, I’m back with the green and multicolor cards that I found most interesting from a mathematical perspective.

As Luck Would Have It 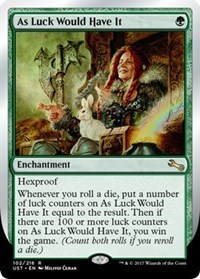 Given that the average roll on a six-sided die is 3.5, you’d need to roll 28.57 of such dice in expectation to reach 100 luck counters. But there’s a reasonably large spread, as the following probability distribution reveals.

Once you get close to 100, you might wonder how likely it is to reach the goal after a certain number of rolls. For that, here’s a handy reference table. 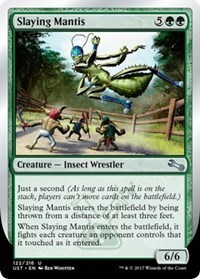 If I were a physics teacher, I would include the following question in my next exam on classical mechanics:

What are the three countries who have not adopted the clearly superior metric system?

Okay, the real question would be the following.

Suppose you’re not living in Burma, Liberia, or the U.S. and hover Slaying Mantis 0.91 meter above the table. You then let go of it, and thanks to gravity, it will accelerate at 9.8 meter per second squared. Ignoring any other forces acting on the card, when and at what speed will it hit the table?

The answer to this question, by double-integrating over time, would be that the card would hit the table after 0.43 seconds at a speed of 4.2 meters per second. Obviously, this is just a warm-up question. We’ll be using drag forces, Newton’s law of universal gravitation, and the mass of the Earth later in this article. 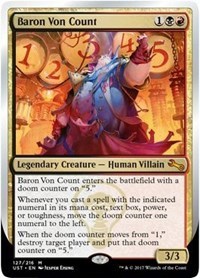 A numeral is a symbol such as 2, 7, or 0. According to Maro’ FAQ, written number words such as “five” don’t count.

I love how Baron Von Count’s evil schemes can backfire when he’s up against Leyline of Sanctity. Since targeting a player is mandatory, Baron Von Count may end up destroying its owner! 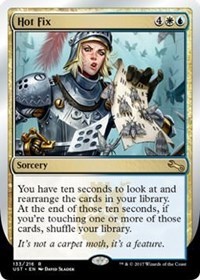 This card, whose flavor text and picture may be a reference to the very first computer bug in history, reminds me of a bet that Owen Turtenwald made at the staff hotel bar after the 2017 World Championship. Feeling exuberant after his teammate William Jensen’s victory, Owen bet Brad Nelson that he could sort his Temur Energy deck by converted mana cost in 45 seconds.

He was not successful.

Fortunately, Hot Fix doesn’t require you to arrange your entire deck—if you simply grab the top 10-15 cards of your library and move the best ones to the top, then you could gain a reasonable advantage within the time available. Whether this is worth 6 mana, however, is doubtful. 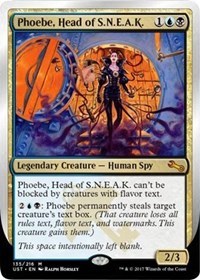 Half a year ago, I tried to answer the question, “What if all creatures in Magic would enter the battlefield at the same time?” Phoebe, Head of S.N.E.A.K. inspires a similar question.

Suppose your opponent controls every creature ever printed. You activate Arcane Lighthouse to make them lose hexproof, gain infinite mana somehow, and then have Phoebe steal all of their text boxes. You’d steal Megantic Sliver and Mirror Entity before toughness-setting effects like Broodstar. What would happen? (Thanks to Casper Macaulay for the question.)

First up, there would be no enters-the-battlefield triggers because no new creatures enter the battlefield. Next, even though Phoebe has received haste, unblockable, and Phage the Untouchable’s combat damage trigger, you can’t actually attack because of Peacekeeper. But you can use activated abilities.

Years ago, a Necrotic Ooze combo deck appeared that aimed to get Devoted Druid and Quillspike in the graveyard for a one-hit kill. A sweet combo for sure, but it’s still based on attacking. Fortunately, you can replace Quillspike with Morselhoarder and generate infinite mana. Using infinite mana, you can then activate Welder Automaton’s ability 20 times for lethal.

The only issue is that Phoebe still has Abyssal Persecutor’s text box. But this shouldn’t be a huge problem. With your opponent at 0 life, you can activate Darting Merfolk’s bounce ability and win the game.

At least, that’s what I’ve been able to piece together so far. Let me know in the comment section if I missed something! 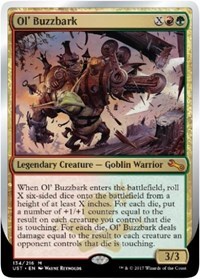 Let’s start out easy. With X=10, which is an amount of mana that you could reasonably generate during an average game of Magic, you may roll 10 dice from a height of 10 inches (or 25.4 cm). Some dice might scatter off the table, but overall it’d be a fun sight.

If you build a deck around generating large amounts of mana, perhaps with such cards as Priest of Titania or Gaea’s Cradle, you might get up to X=125 for instance. In that case, you’d probably need a ladder, as you’d be tossing 125 dice from a height of 125 inches (or 317.5 cm). If I pack 125 of my favorite dice—the standard 16 mm ones that weigh about 5 grams each—together in a 5x5x5 cube, then each side would be 8.0 cm long and the combined weight would be about 625 grams. If the dice were packed tightly together, then the effect would be similar to dropping a can of soup on the table. People might not be happy, but the game could continue.

Let’s up the stakes. Suppose you’ve achieved some infinite mana combo and decide to cast Ol’ Buzzbark for X=421,875, i.e., 75 cubed. This means you’d have to hop into a plane, as 421,875 inches (or 10.7 kilometer) is roughly the cruising altitude of a typical commercial jet. The payload would be a cube with side length 1.2 meter and a total weight of 2,109 kilograms. For simplicity, let’s suppose that all dice would all be glued together like a gigantic, non-dispersing brick. I’m not sure if it would really count as rolling dice, but who cares at this point. In terms of dimensions, it would be like tying 25 humans together (though with a slightly smaller drag coefficient) and tossing them out of the plane without a parachute.

As gravity pulls the dice towards earth, air drag increases, and terminal velocity is reached within seconds. You’d have slightly over a minute to run away before the dice would rain down on the table at about 150 m/s, unleashing utter destruction. Depending on how the dice were fastened, it would be somewhere in between a hail storm and a World War II era bomb. Unless you were playing under a rather sturdy roof, the game would probably be over.

But how far can we go? Well, given that the distance to the moon is about 384,000 km and we don’t want our dice to be caught by the moon’s gravity, a realistic maximum is to set X at 2,350 cubed, which comes down to about 13 billion mana. You’d go up in your spaceship to a height of 330,000 kilometers, come to a complete stop relative to the Earth (while still orbiting the sun) and release a 38 meter-per-side cube with a total weight of 65 million kilograms—about 150 times the International Space Station. We’re already well beyond the largest object ever lifted into space. It’s essentially a small asteroid, assuming you fused the dice together properly.

Very slowly, Earth’s gravity would accelerate it. But given that the gravitational attraction force is inversely proportional to the square of the distance, this would happen at an arduously slow pace. After a full day, the cube of dice would only be falling toward Earth at a measly speed of 133 m/s, with still about 324,000 kilometers to go. If your launch procedure hadn’t earned you a slow play warning yet, you would surely receive one now.

After the second day, the moon’s pull would fade, and we’d be up to 358 m/s with about 303,000 kilometers to go. At this point, NASA would be training deep-sea oil drillers with nukes, astronomers would be explaining the strange phenomenon on news programs, and Mark Rosewater would issue a public apology. Time in the round was called long ago.

As the cube gets closer to the earth, it picks up in speed, going faster and faster. After nearly five days, it crashes into the Earth’s atmosphere with a speed of over 10 km/s and a kinetic energy of nearly 4 petajoule—roughly 60 times the energy released by the atomic bomb that exploded over Hiroshima. It would be the largest object to have entered Earth’s atmosphere since the 1908 Tunguska event that destroyed a wide, remote, and forested area of Siberia.

Fortunately, according to the Impact: Earth! tool, we can expect the bulk of the object’s energy to be absorbed by the atmosphere. As plastic dice have a relatively low material density, the projectile begins to break up, bursting into a cloud of fragments at an altitude of about 10 km. The explosion might generate a bright flash, an air blast, and a shock wave. Yet, we wouldn’t get a huge impact crater. Fragments would still strike the surface, and the eventual impact would almost surely be enough to annihilate everyone and everything surrounding your game table, including Ol’ Buzzbark itself. But games on the other side of town could continue.

In the end, even if we try, Ol’ Buzzbark won’t lead to a global extinction event. But the next time someone walks into your local game store with a bucket full of dice, I recommend to just run far away.