Here’s my Unpopular Opinion: Konda, Lord of Eiganjo can be a fun Commander.

Welcome to my new budget deck series, Unpopular Opinion! I’ll be taking Commanders that don’t see the light of day very much and convincing you to try them out by building $50 budget decks with them at the helm. I’m going to try to write one about as many of the color combinations as I can so you can have a ton of options for Commanders off the beaten path.

Let’s get back to my opening statement – I really do think Konda would be a lot of fun as a Commander. How do I know that’s an unpopular opinion? Well, the stats speak for themselves – on EDHRec, there are only 13 Konda decks listed, putting him at #897 among all Commanders. (Presumably it’s a tie with some other infrequently played legendary creatures.)

Let’s take a look at our headliner: 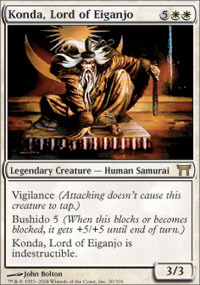 For $2.49, I guarantee you won’t find any samurai that are more indestructible than Konda. Here’s my pitch for an overall theme – let’s take Konda into the red zone and crash through for lots of Commander damage. I realize that sounds absolutely ridiculous; we’re talking about a 7-mana 3/3, after all. However, I really think Konda has what it takes to be the standard bearer of our budget Voltron list. How are we going to make that happen?

Years ago – I’m talking 2009 or so – I played Commander (or, more accurately at the time, EDH) with some judges in an airport either before or after a Grand Prix. It’s hard to remember which. What I do remember is one of my opponents having a Konda deck that he described as “wrath tribal”. He had a double digit number of sweepers that cleaned up the board but left Konda standing alone in the wreckage, and at some point, I internalized this as some sort of universal truth of Commander and played way too many sweepers for the next few years. Even today I still sort of think of this kind of deck as emblematic of that era of EDH, but I could be wrong.

Regardless, that served partially as the inspiration for this article, though I can tell you for sure the cost differential between the two decks is high. Hilariously, I’ve stopped at 9 wraths, having cut a few that eclipsed the $2 mark in favor of these budget-friendly options. We still have some powerful ones – Martial Coup brings in soldiers, Cleansing Nova is flexible, and Realm-Cloaked Giant brings in a friend a little later. The whole point remains the same, though – leave Konda on the battlefield, clean everything else up. Urza’s Ruinous Blast will leave behind opposing Commanders as well, so stay focused on what the board state will really look like afterwards if you cast one of these and decide if that’s a world you want to live in before you start casting one of these spells. Remember, Barrin promised never to cast Obliterate, presumably because it would not make for a better world. Don’t be a Barrin. (Funny that Urza’s world-destroying stance on Urza’s Ruinous Blast so resembles Barrin’s on Obliterate.)

Wraths aren’t going to win the game for us, though, much to my obvious chagrin. So, let’s figure out how we’re going to get Konda to deal some damage.

Chump-blocking Konda is kind of a no-brainer. Let’s make it a little more difficult for our opponents by giving Konda trample. Block him? Great, he gets +5/+5 from Bushido and still has trample. Don’t block? Sweet, you still take five or six, and that’s just with these equipped. We can do even better:

Konda can get plenty big with some of these attached to him. Strata Scythe is one of my all-time favorites in a mono-White deck, since that seems to be where equipment goes to hang out. It’s a shame Endless Horizons is way outside the budget for this one. Inquisitor’s Flail and Avarice Amulet both look far better when attached to Konda, as the backfire on the Flail doesn’t matter, and Konda’s allergy to death keeps the Amulet on your side of the table.

The Lens means that you get a two-card payout if your opponent chump-blocks, while Kusari-Gama will pretty much clear your opponent’s board – if they have something that will survive eight damage, just use the inefficient colorless firebreathing ability.

Of course, we could force our opponents to block. It’s tough to do in Mono-White, but it might be worth trying. (It’s easier to make Konda unblockable – you even get to play Hot Soup with no downside – but it’s more fun to leverage the Bushido.)

Nemesis Mask is one of my favorite cards of all time, and somehow I think I’ve never written about it. That changes today! Obviously the six mana investment to play and equip it is a little stifling, but it’s worthwhile – even though Bushido only triggers once, you still get to order blockers the way you want to, meaning you get your pick of the creatures that die. Konda may not have a jetpack or a ‘Vette, but he has a Grappling Hook, and he can use it to snag a key creature and hopefully do some double strike/trample nonsense.

Once you’ve cajoled, bamboozled, or otherwise hornswoggled someone into blocking, Bushido is a pretty good punishment, but it might not be enough – I’ve brought in two ringers to help finish the job.

Dead-Iron Sledge is sometimes going to be unnecessary, but once in a while you’ll run into the person who manages to give their creature 800 toughness or prevent damage to their team, and you need a way out. Dead-Iron Sledge does a great job of destroying their creatures and a bad job of destroying Konda – and in the case you manage to get both it and Nemesis Mask out, it’s all happening. Quietus Spike gets around the toughness conundrum and makes trample even better on two counts – you trample over for more, and you get to trigger the ability even if they block.

There’s more to Konda than just all this, though. Konda’s indestructibility lends it to some silly combos that harken back to the olden days – let’s see if we can’t funnel the damage we take into Konda instead.

Pariah’s Shield failed the budget test at $4.99, but we have Pariah, the original flavor aura version, and General’s Regalia, the Mercadian Masques version (which is a nice way of saying it’s the bad version.) The Regalia is best used as a defensive measure when you have nothing else useful to do with your mana, while Pariah is a better proactive option.

We can also have Konda block as much of the opposing team as possible, which is an amusing way to hold off an enemy force. A hundred saprolings, huh? Unless they have trample, they’re not getting past a Konda with Entangler. Brave the Sands is a little blander, but it’s good enough.

I’ll freely admit this might not be good, but it’s too funny to pass up. Oh, no, I lost the flip! I’ll have to destroy my indestructible Commander! How will I ever recover? Forget the fact that I spent a card and some mana for no in-game value – I had a great time doing it!

We’ll need to protect Konda from targeted effects that get around indestructible – let’s look at some options.

Most of the effects that get around indestructible won’t be colorless, so these four protection effects are a good way to hedge against your everyday Swords to Plowshares effects. You will get wrecked by Brittle Effigy, though, so I guess look out for me in 2011 when I was convinced that card was sweet. Konda also still gets hit by board wipes that exile or similar, and there’s not a lot to be done about that – get ready to pay 9 mana or more for the next cast.

These two protect us against targeted “sacrifice a creature” effects, but be warned that Innocent Blood and the like still get through.

Protection from all of your opponents gets around a lot of negative effects, but again, some things can’t be stopped.

Konda costs 7 the first time and more thereafter, so we’ll need some ramp and some ways to make sure we hit land drops, which is a little more possible in mono-white than you might think. Let’s see what the options are:

Boreas Charger is a fun catch-up ramp card, while Kor Cartographer is just a 4-mana 2/2 with a restrictive Rampant Growth attached. Burnished Hart continues to be a Commander classic – despite the heavy overall mana investment, it’s worth it when you don’t have access to Green and need to ramp up hard. Solemn Simulacrum is even more affordable now in the age of its 95th reprint, and Eternal Dragon, while not being an actual ramp card, does some solid plains-cycling early and represents a recursive, if mediocre, threat later. Isolated Watchtower makes its yearly appearance in a mono-colored budget deck with 31 basic lands, which is really the only place it can live reasonably. The rest are just mana rocks, with Unstable Obelisk being a backdoor into a little extra removal.

It always amazes me that Heliod’s Intervention is so affordable. It’s such a powerful card that I end up putting it in most white-heavy decks. The rest are fairly standard, except Oblation, which you don’t see much anymore – its history of play lies largely in the days of the “tuck rule”, when Commanders didn’t get to dodge trips to the library, but sometimes it’s the only way to deal with a problem permanent.

We don’t have a ton of card advantage in this list, so I shoehorned in some artifacts to help out in case opponents don’t block when we have Infiltration Lens equipped. Staff of Nin and Tome of Legends are straightforward, with Oracle’s Vault being one of my favorite cards that I rarely get to justify playing because it’s usually out-powered by something like The Immortal Sun. Well, brick by brick, card by card, we’re going to build this house of golf. Er, free cards. House of free cards.

Rounding out our nonlands, we have some cards that force opponents to play fair, whether it’s by exiling graveyards, preventing searches, or quashing unnecessary card draw.

This deck has 38 lands, 31 of which are basic Plains, but sometimes a card draw is better than a land. For those lean times, we have these four cyclers (or cycler-alikes, in the curious case of Cryptic Caves) at the ready.

This is the budget deck equivalent of me typing “Strip Mine & Wasteland” at the end of a decklist.

After all that, we’ve come in at a miraculous $49.99, proving that a Konda deck with a strong theme and, at least, a decent game plan on paper can be built on a budget! I hope my opinion about Konda isn’t so unpopular anymore, and I’ll make sure to return to this series in the future when I can – if something sweet gets spoiled or I get a wild idea, it will get interrupted, but I like this constraint and I’m interested in where it goes. Here’s the full decklist – shout at me on Twitter at @RagingLevine if you have feelings about this deck or what you’d like to see built in the future!