Despite my best efforts, weather in Atlanta prevented me from getting to Grand Prix Oklahoma City and playing my first Modern tournament in a while. This is the first time travel issues cost me the chance to play in an event after quite a few close calls, but at least this time I never left my home city of Boston and was able to go right home to shake it off rather than be trapped in some city for a day.

My suitcase managed to travel to Minneapolis before making its way home two days later, and today I want to talk about its contents.

I didn’t know what I was going to play the night before leaving for the GP. I’d tried a fair number of decks and had middling success with a lot of them, and nothing really stood out to me. What I played the most of leading up to the event, though, was Grixis Death’s Shadow.

The last time I was going to play a Modern GP I was excited to play this deck, and unfortunately I did too well in the Limited GP at GP Vegas to get a chance to play Modern. Boo-hoo, I know. I decided that after dealing with all the ins and outs of getting refunded for my flight and making it back home, I would have chosen to play the deck I knew best: Death’s Shadow.

After playing somewhere between 50 and 60 matches on Magic Online, this was the list I was going to sleeve up for GP OKC if I didn’t audible:

This is by all accounts a pretty stock Grixis Death’s Shadow list. After trying various Thoughtseize decks, this felt the best against a lot of big mana strategies and Storm.

Temur Battle Rage actually wasn’t even a card I tested much. I just felt like I never wanted it. Against unfair decks I’d usually rather have a piece of disruption, and against decks with a high removal count, I’d rather have basically anything else.

Against fair decks you’re usually tearing apart each other’s hands with discard and controlling the board with removal. Being stuck with a card that isn’t a threat or answer can be the difference between winning and losing.

Against unfair decks, yes you can kill them quickly with Temur Battle Rage, but the first step is slowing them down enough to get to that point. Not maxing out on your disruptive elements for a way to do some direct damage just isn’t worth it.

These were all reasons I came up with before even testing Temur Battle Rage, and after talking it over with a few other players, my opinion was confirmed.

Lilianas, while good in fair matchups, just don’t pull their weight in unfair matchups. With Gifts Ungiven being the most important card out of Storm in game 1, you can often tap out for a Liliana of the Veil, make your opponent discard a card of their choice, and then never untap again. This is a matchup I remember Liliana of the Veil being pretty good in, and now, I’ve found it more of a liability in game 1.

Liliana of the Veil is often too slow against Tron or Scapeshift, and for that reason I relegated her to the sideboard for when I’m playing against other midrange creature decks and for when I have more disruption to back her up.

The only other choice is Opt versus Serum Visions. Opt simply allows you to play at instant speed with Stubborn Denial and the counters out of the sideboard, so I think it’s overall better despite my early uninformed opinion. Initially, I thought that digging deeper would be more important, but in practice I definitely found a lot of value in having my cantrips as instants.

Overall, I think this deck is still a pretty good call against all of the big mana strategies we saw that destroyed the Grand Prix this past weekend. Jeskai Control was one of the decks I feared playing against, and all of these big mana strategies may push that deck out of popularity, leaving Grixis Death’s Shadow as my fair deck of choice even after the developments we saw in GP OKC and how poorly Death’s Shadow. It probably did poorly because I didn’t get there, right?

…and The Other Deck

The next deck I want to talk about is extremely interesting, and made me ponder whether I wanted to stick with my fair deck or do something off the wall. In Modern, there are so many good decks that I tend to play a known quantity because of the risk of trying something new without a giant sample of testing behind it.

That said, Matt Nass played this deck on stream for several nights in a row and his results were impressive. Matt managed to go 17-3 in Leagues with the deck, and that certainly surprised me, because on paper I didn’t like the deck much, but he kept winning over and over again. I started to ask other players if they thought the deck was real, and no one really seemed to have a good answer.

Here’s the deck I was considering, but ultimately wouldn’t have played at GP OKC:

Let me tell you—this deck changed a fair bit from day 1 of Matt’s testing to his last day of testing. Initially, he had a sideboard that was non-functional, including cards like Bloodghast in the sideboard. You know, to get your opponents when they bring in their graveyard hate.

I think the sideboard actually turned out great, and the deck was very powerful from what I saw on stream. The deck was regularly putting two or three huge threats out on turn 2 or 3 and putting the opponent to the test to see if they could stop it. Another huge upside was that the deck looked like a ton of fun to play.

The deck is somewhat difficult to pilot, but not that challenging once you figure it out. You often have to make an unintuitive play, like not casting a creature so that you could hold it to cast two on the following turn to bring back Vengevines, or hold onto a Street Wraith a turn so you can use it to fuel Hollow One alongside a looting effect.

You only cast Burning Inquiry when things aren’t going well because it’s the loot effect that doesn’t allow you to choose your discards. It basically feels like the panic button. 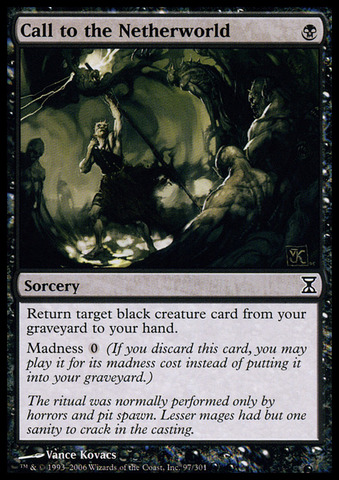 Call to the Netherworld mitigates your discard effects. By discarding it with a black creature when you play Faithless Looting you’re actually not losing resources.

As a graveyard deck, this deck goldfishes faster than Dredge, and is actually more resilient to graveyard hate because it can win with Death’s Shadow and Hollow One, or in the case of Grafdigger’s Cage, Gurmag Angler is also unaffected. This is a good way to sidestep graveyard hate and still put a fast clock on a deck that kept a mediocre hand because it contained Rest in Peace.

I also liked that this deck could overload its sideboard with the same powerful sideboard cards. Blood Moon and Leyline of the Void can be bad in multiples because you don’t get any additional effects. This deck has a ton of ways to loot away excess cards so not only are you likely to find that Blood Moon, you can discard any additional copies to your flashed back Faithless Looting or that extra Cathartic Reunion.

This deck has a few problems though.

The creatures are big, but not quite big enough without interaction. A 5/6 Tarmogoyf can be a problem if you don’t have a fast start, as there’s virtually no interaction at all. If the deck hits its fail rate early, it has trouble playing catchup. Imagine if all you have in play is a 4/4 or a 5/5 when Karn Liberated hits the battlefield. Often the way you have to beat an early Tarmogoyf is simply by going wide and consistently deploying more threats. This is okay if the deck can consistently do that, but I’m afraid that it can’t despite the 20-match sample I witnessed.

Another problem with this deck is, well, Burning Inquiry. It’s just such a terrible Magic card. It essentially gives you a random hand and random graveyard in a deck that wants to control both of those zones. You’re merely hoping to get lucky and discard your Vengevines and be left with the Hollow Ones in your hand. This is not a recipe for tournament success.

This deck seems to only be a single card off. If there was another version of Faithless Looting or Insolent Neonate as a 1-drop, I think this deck could be rather competitive. It has potential, so if you’re looking for a Modern project, this could be worth working on.

I did pack this deck in my suitcase, but ultimately I would not have chosen to play this deck for a couple of reasons. The first is that I had never played a match with it. I watched Matt play a bunch with it, but never actually picked it up myself. I would have at least liked to run a League or something if I was going to audible out of a deck I’d played over 50 matches with.

Another reason was that, despite Matt’s results, I was still skeptical. Burning Inquiry just didn’t feel like it was playable in this deck, and without being at least moderately confident in all of the card choices, I wasn’t going to gamble away a Modern Grand Prix, which is historically the format I actually do the best at in Grand Prix.

While I told Matt I gave him all my cheering power, he ended up going 2-4 on Day 1 after his 3 byes and not making Day 2. He reported back that “Burning Inquiry wasn’t kind to me.” I can’t say that I was too surprised.

So even though I didn’t make it to the Grand Prix, I got to reaffirm that I should probably always play the deck I tested extensively rather than be persuaded by a small sample and short-term results.

What do you think about this B/R Hollow One deck? Would you have played it or stuck with old faithful? Are there any ways to improve this Matt Nass creation? Let me know!