This is the deck list I played at Grand Prix Oakland, and it might look familiar because Reid Duke played the exact same deck list save one card—a second Grim Haruspex instead of the second Merciless Executioner. I’ve already written about Rally the Ancestors and why I think it’s a great deck, but I’d never felt as strongly that it’s the best deck in the format as I did after this weekend—the best deck by so much that not playing it was a mistake. The Fleshbag Marauders in the main deck were a significant piece of technology, and made our build the best one in the room.

Collected Company is a messed up Magic card. It creates card advantage in a Standard format where there aren’t tons of ways to do that, especially for a deck with mostly creatures. It’s also a form of fast­ mana. Perhaps not in exactly the same way as a Dark Ritual, but when I spend 3G on a Collected Company and put a Catacomb Sifter and a Nantuko Husk into play who can really say otherwise? I got 6 mana worth of cards into play on the fourth turn of the game.

It also works as deck manipulation and a Demonic Tutor. When you hit something alongside a Jace, Vryn’s Prodigy that transforms to recast the Company, you see 12 cards and put 3 creatures into play. Fast mana, card advantage, and tutors are all synonymous with unfair combo decks, and Collected Company offers all of it.

Elvish Visionary sees play in Legacy Elves, and that deck has been successful for as long as I can remember. LSV won an Extended Pro Tour with 4 Elvish Visionary in his deck. It’s pretty much amazing in every format, and yet people don’t play it in Standard. I’ve read multiple strategy articles where people said it’s the first card they sideboard out in virtually every matchup. Never do that! Reid and I had a conversation where he was sideboarding out Elvish Visionary some of the time in some matchups, and his win rate climbed rapidly the moment he stopped. 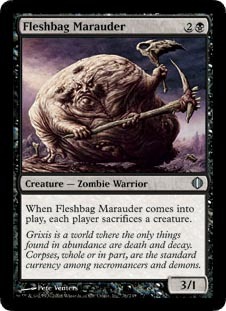 As I prepared with the deck I felt totally helpless against anyone who played a big creature, and I see the creators of the deck did an excellent job trying to address that with the 4 copies of Sidisi’s Faithful. I copied a list from a Magic Online event and saw 2 Fleshbag Marauders in the sideboard. I quickly realized that I was just sideboarding it in in almost every matchup I played. Here’s why:

• It provided additional answers to the problematic Anafenza, the Foremost.

• It wasn’t a stock choice in the main deck, so people would be taken by surprise. This is especially true when you hit 1 or 2 Merciless Executioners off Collected Company.

• I felt it would be good in almost every matchup except token decks, which are favorable matchups anyway, so a card that was bad in matchups that I usually win and good in matchups that can be problematic is a great addition.

• We cut Grim Haruspex down to 1 (or 2 if you copy Reid’s list) as it is a nonessential piece of the combo, and it’s a little too slow in your close or unfavorable matchups. Against Atarka Red or Abzan it’s just too expensive and the ability doesn’t become relevant very often. It’s great when your deck works well and you get to do your thing, but I felt that was happening often enough that I didn’t need a card that was poor in my opening hand. 1 also felt like a perfect number, because having 2 is totally unnecessary regardless of how a game plays out. Naturally drawing 2 does not help you, and once you already have access to 1 you’d much prefer to hit a variety of creature cards off your value Rallys or Collected Company.

I thought Rally the Ancestors was hugely underappreciated going into the tournament, proven by the 3 copies in the Top 8 and eventual win. I was overjoyed as I heard more and more people explain to me that they couldn’t justify playing Hallowed Moonlight in their sideboard as it was too narrow and they instead played Negate or Disdainful Stroke which are much easier to beat. I also heard many people tell me that they thought the deck was great but it was simply too hard to play, and I was surprised at how many of those people were professional players. This deck was out of my comfort zone, but it didn’t take much practice for me to feel proficient with the deck. I think it’s just the type of deck that people look for a reason not to play, because it just looks like a weak deck of all low-power cards, and usually decks like it are inconsistent and weak, but that simply wasn’t true this time.

I saw the deck consistently perform well at all levels of competition from Grand Prix to Magic Online Leagues and Dailies. There was a European Grand Prix that put 3 copies into the Top 8 all playing the exact same list! It even got 1st and 3rd place in one of the MOCS monthly events. These were some of the points that resonated the most with me and had my confidence at an all-time high.

The deck is never popular or widely played, and has amazing results despite the high level of difficulty. It has amazing results online where the metagame is saturated with Abzan, and the interaction between Anafenza, the Foremost and Catacomb Sifter‘s Eldrazi Scion is even bugged—you don’t get a scry trigger or any triggers from Zulaport Cutthroat. In real life, because the Scion token is not a creature card, it’s unaffected by Anafenza. This interaction is huge and comes up all the time—I’ve had multiple games decided by it. So Rally wins, a LOT, on Magic Online where the cards don’t even work correctly. Imagine how much more it would win if the cards worked? That’s what I aimed to find out at the Grand Prix, and Reid Duke showed everyone that he’s one of the best players in the world—and that Rally is the best deck in the format.

How did I end up, you ask? With my great deck list and deep understanding of the format and all-time highest confidence possible? 11­-4.