To maybe the surprise of no one, I chose to play U/W Control once more at Grand Prix Stockholm. Not only did I play about 140 Leagues before the tournament, I also played the Miracles version at both the Pro Tour and GP Prague. Apart from having an incredible amount of experience playing the deck and knowing the thought process behind each card choice to make metagaming changes, I also believe that it’s the best deck in Modern.

It kind of has it all. Versatile answers, independently powerful cards, a great mana base, the best sideboard, high consistency, and overwhelming finishers. The only thing it really lacks is a way to be proactive, but between its independently powerful cards—meaning it mulligans well because it doesn’t rely on synergy and combos—and its finishers that take over quickly, the need to be proactive in an open format becomes less important.

A major reason we still see U/W Control doing so well is not only because of its own prowess, but because a large number of great players use it as their weapon of choice. And more importantly, the paper Modern metagame has been slow to adapt to its power level. People haven’t reacted in the right way. They can’t deal with U/W Control the same way they usually can with new decks in Modern, with powerful sideboard cards and tuning their list.

It has to do with speed rather than card selection. A lot of players have chosen to play a few grindier cards, maybe one or two more counterspells in their sideboard, but they have to understand that they can’t out grind U/W. They have to do something powerful to overcome U/W Control like a combo or fast kill. U/W has a ton of card advantage, can deal with almost anything, and has Terminus.

The turn you miracle Terminus and get to keep up a counterspell like Cryptic Command or Snapcaster Mage, or cast Jace, the Mind Sculptor the same turn, the game swings so heavily that it almost doesn’t matter what they’ve done before that. It doesn’t matter if they’ve gotten two Clues from their Tireless Tracker or cast Collected Company to return it with Eternal Witness. U/W Control will take over.

So how do they counteract this? Speed. Shorten the number of turns the U/W Control player has to find Terminus. That’s the reason we’ve seen a rise in aggressive decks like Bridgevine or Bushwhacker Goblins online that try to goldfish on turn 3, a full turn faster than other aggro decks. As fast as U/W Control gets to 4 mana, it gets a lot more time by having Cryptic Command to tap the opponent’s team, or Supreme Verdict and Settle the Wreckage. Note that if this gives you another turn and your list ran an Ancestral Vision you suspended on turn 1, you get three fresh cards on turn 5. That often can easily buy you yet another turn to hardcast Terminus on turn 6.

As more and more people have realized that’s the case and slowly adapted, so has my list. See the small changes from tournament to tournament as I’ve been trying to cope with the format getting faster.

If you look closely, you’ll see slower cards such as Ancestral Visions replaced with more early game interaction, like Timely Reinforcements. I added more Search for Azcantas. While it isn’t better than Ancestral Vision in the mirror, it helps you get closer to Terminus, and it’s better when you draw one of each. Even the number of cantrips goes down because you have less time to cast cantrips when you are under pressure, and your game plan relies more heavily on finding Terminus faster. Lastly, I changed a Supreme Verdict to a Settle the Wreckage in the main deck to counteract the faster decks with haste creatures and recursive threats even more, though I’m slightly worse versus Spirits.

The second addition between GP Prague and GP Stockholm is Vendilion Clique. While I personally dislike the card, with the high number of Pros playing U/W Control I started facing in the later rounds of the tournament, it became a necessity.

I don’t like Clique because I think that the body does close to nothing for U/W Control as its game plan isn’t to beat you down, but to take control of the game. Before, with more Affinity and cards like Lingering Souls roaming around, Vendilion Clique had an even harder time trading 1-for-1 against another piece of cardboard, which I didn’t like. But it’s the single best card in the mirror while it isn’t useless against other decks. Especially now with cards like Gigadrowse going up in number in Storm decks and Spirits on the rise, it has become a lot better.

If it isn’t obvious at this point, I’m planning to continue playing U/W Control in upcoming Modern events if nothing bizarre changes the metgame. Since Modern is such a broad format and it takes a lot of knowledge to know how to play your deck perfectly, changing decks also becomes more difficult, which plays into the equation. After GP Stockholm, I actually saw a great piece of tech that I want to try and adopt for my own list: Talisman of Progress. 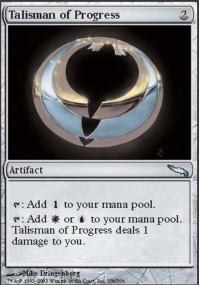 Talisman of Progress is genius, and it could potentially be really good in U/W Control. When I saw it in action while sitting beside the player casting it, I even said out loud, “wow, that’s genius.” The reason has everything to do with that golden leap of mana between 3 and 4.

In U/W Control, you’re trying to counteract whatever could come up by playing an array of answers before 4 mana. Since your list is tight and has to work together with your sideboard, there’s a lot of what looks like weird, but well thought out one- and two-ofs like Detention Sphere, Vendilion Clique, Mana Leak, Remand, Censor, Timely Reinforcements, etc.

All of these are there to get you to 4 mana against aggressive decks so you can take over, but still have enough cards against control post-sideboard so you don’t have dead cards like Oust left. Talisman of Progress can solve that by proactively moving from 2 to 4 mana. Not only does it get you there faster, but it also plays well with having a ton of cheap 1 mana spells like Serum Visions, Oust, Spell Snare, and Path to Exile. Lastly, the decision between playing 24 and 25 lands in U/W Control is close, and the number of cantrips you are playing usually decides the final number. With Talisman of Progress, you’re already getting a “free slot” by removing a land to play 2 to 3 copies.

This is my first attempt at U/W Control with Talisman of Progress:

Lastly, thank you everyone for supporting me at GP Stockholm and congratulating me at and after the event. It’s truly the cherry on top that makes the sweat worth it. Thank you!