Did you just topdeck that?

These are all pretty common responses after someone draws a really good card to win a game. Topdecks are a huge part of this game we play, and today I’m going to detail how you can build your deck in a way to give you more good topdecks and less bad draws in the late game.

Let’s take a look at a card like Sylvan Caryatid in Abzan, and why what was once a staple of the archetype has now fallen out of favor. 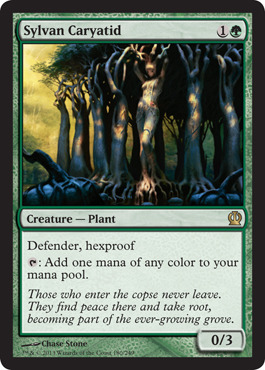 The short answer is that more people play with End Hostilities in Abzan and they’re a bit of a nombo together, but even when people don’t play with End Hostilities in their main deck you can still see people shying away from Sylvan Caryatid. The reason is that it’s a poor topdeck in the late game and you play more games that go late now, against matchups like the Abzan mirror and UB Dragons.

Caryatid is pretty clearly a good card to have in your opening hand in these matchups and pretty clearly a bad card to draw in the late game, so how do you decide when this is an acceptable risk to take? For me the answer to that is simple: you just need to envision how the games play out most of the time.

If you’ve played a lot of the Abzan mirror match then you know the games are long and grindy attrition battles. It’s not at all uncommon for these games to last 20 or 30 turns, and with scry it’s entirely possible you see over half the cards in your deck in a game.

Let’s say you see 35 total cards in a game between scry, Courser of Kruphix reveals, and your natural draw step. If you see 35 cards in a game and 7 of those cards are the ones you see in your opening hand then you know if you see exactly 1 copy of Sylvan Caryatid in a game, 20% of the time it will be in your opening hand and 80% of the time it will be seen or drawn later.

Now if it’s in your opening hand (or first or second draw step) you’re going to be a happy camper, but that only happens about a fifth of the time, the rest of the time you’ll draw it when you don’t want it. It’s easy to see that most of the time the card is going to be a stinker in these circumstances—when you factor in the End Hostilities arguments and the fact that your deck has many more mana sources now it’s even more pronounced.

Elvish Mystic is a very similar card, but it differs from Caryatid in a few important ways.

Sure, if you just put Elvish Mystic in your Abzan list and play mirrors you’re going to have a remarkably similar experience, but nobody does that. Elvish Mystic goes in decks that really want to have it in their opening hand, and those decks win a high percentage of games when they get this start.

This was an important lesson when miracles were legal in the format, like Bonfire of the Damned and Terminus. 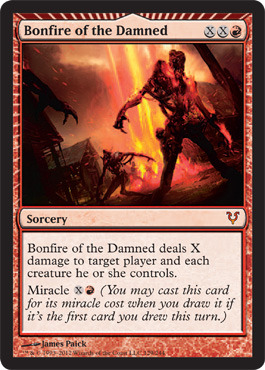 I fancied myself a bit of a Jund aficionado, and I’ve been called a lucksack more times than I can count for miracle’ing a Bonfire of the Damned. Bonfire breaks the mold a little since, in matchups where the games don’t last very long like mono-red aggro, it still had utility in your opening hand—for 3 mana you could cast it as a Simoon.

Terminus, on the other hand, is a card you need to be more careful with in a format without Brainstorm. It was a weak card in Standard against Naya Blitz decks and Mono­-Red aggro, you didn’t want it in your opening hand and you never wanted to cast it for 6 mana.

It was good if you miracled it before turn 5 or so but how often could that really happen? Playing a card that you only want to see in your draw step on turns two, three, or four is just not a winning formula. It’s good in three of your total draw steps and awful in your first 8 cards.

Of course, it’s possible to play it as your first draw when you’re on the play and it’s also possible the game lasts longer than four turns, but if the opponent is providing a fast clock you want your sweeper to be relevant as soon as you can, and with no sweeper you’re not likely to play a game that lasts 10 turns.

A card that’s normally considered a good or bad topdeck may change depending on how many cards you see. If you have a Merfolk Looter out, you can be a bit more liberal with how you construct your deck—cards that have polarized values can be discarded when they’re bad.

If you’re seeing all these cards with Dig Through Times, then you aren’t topdecking the bad cards as often, you’re seeing them with Dig and choosing not to put them in your hand.

That’s not an excuse to put bad cards in your deck, but it will alleviate the downside of topdecking a useless card. Dig Through Time, scry, and Courser of Kruphix are all reasonable ways to fix your draws and prevent yourself from having as many bad topdecks. The coolest example I can think of for this is the deck Alex Hayne used to win Pro Tour Avacyn Restored, using cantrips like Thought Scour and Think Twice to make it so he saw more cards in a game and those cards would all be potential miracles. He played more miracles in his deck and more instant card draw to give himself the best possible chance of hitting those miracles. It was a deck built around lucky topdecks!

I was recently asked about Adrian Sullivan’s match in the Top 4 of Pro Tour Dragons of Tarkir against Martin Dang, and why Adrian would choose to sideboard in Interpret the Signs against a red aggro deck. 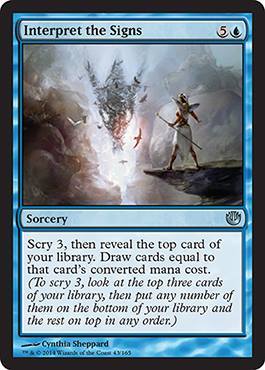 I thought this was not only clearly correct, but also quite obvious. Andrew Cuneo once told me that in his control decks he never sideboards out any card draw in any matchup, even Jace’s Ingenuity against hyper-aggressive beatdown decks. I followed his advice and I have been very happy with the results.

Conventional wisdom would dictate that you don’t want expensive cards in your deck that don’t affect the board, and that’s a good lesson to follow. But the reason it’s not true for these matchups is because the games you win last many turns, and in those games you don’t want to play a 1-for-1 attrition battle when your deck has 28 lands and their deck has 20.

Flooding out is a real concern, and if you execute your deck’s game plan, the games will last a long time and your opponent will simply draw more spells than you since they have fewer lands. You need that card draw to win. You need to have good late-game topdecks in your deck or else you don’t have the inevitability that defines your deck.