Thing in the Ice is so potentially powerful for the amount of mana that you invest in it. You play it on turn 2, where it’s not great but does a decent enough job of blocking and surviving Lightning Bolt, and then you play your game normally and eventually it’s going to flip and kill them. 7/8 is very big creature—big enough to fight most Eldrazi that see play in Modern—and it kills them in 3 turns, or 2 if they fetched enough or cast a couple Thoughtseizes. Almost as an afterthought, it happens to bounce every other creature, but not other copies of itself. If you manage to stack 2 Things in the Ice so that they flip in consecutive turns, you clear the board, attack for 7, then clear the board and attack for the final 14.

Historically speaking, the ability to play an early drop that develops naturally as the game progresses has been tied to very powerful cards. In the earlier periods, cards like Quirion Dryad and Werebear filled this role—now there’s Tarmogoyf, Bitterblossom, Young Pyromancer, Stoneforge Mystic, Delver of Secrets, and Jace, Vryn’s Prodigy. This is a very, very powerful list. All those cards share the same characteristic—you play them early, for a small amount of mana, and as the game goes on, through very little effort on your part, they become stronger to the point where you get much more than you invested in stats.

Though the principle on Thing in the Ice is the same, it’s a little different because it’s much more swingy. Tarmogoyf is small early and big late, but it’s also medium in the meantime. Young Pyromancer will make 0 tokens at first and 5 tokens at some point, but it’ll also make 1 or 2 tokens on the way there. Thing in the Ice is black or white—it’s either an 0/4 or a 7/8, and nothing in between. This means that you need to make sure you can actually turn it on, because if you do things halfway, then it’s like you’ve done nothing. It also means it’s important to play Thing in the Ice early, as it’s a horrible top deck.

Thing in the Ice is powerful enough to see both Standard and Modern play. In Standard, flipping it is not going to be easy, but there’s also less pressure for you to flip it quickly since people aren’t going to be killing you turn 4. The bounce effect is also better in Standard where tokens and expensive creatures are both more prevalent, so you get more out of flipping it than you do in Modern. Since the format is mostly creature-based, you also get more mileage from having multiples as it’s more likely that flipping it will Time Walk your opponent. It is, however, weak to Reflector Mage, which is a very popular card, so that makes me more excited about it in older formats like Modern and perhaps even Legacy.

Modern is a less forgiving format—you can’t sit around with an 0/4 forever—but it’s also a format of cheap spells, so you can flip Thing in the Ice more easily. Having Thing in the Ice in your deck means that you don’t have to play green for Tarmogoyf or red for Young Pyromancer (with whom it’s a big nombo anyway), so you can play UW or UB tempo if you want.

On top of being a 7/8 that bounces their board, Thing in the Ice is also a good combo with enters-the-battlefield triggers—most importantly, Snapcaster Mage, but potentially things like Abbot of Keral Keep or Wall of Omens. A curve of turn-2 Thing in the Ice, turn-3 spell + spell, turn-4 spell + Snapcaster Mage + spell is not unrealistic and it’s likely to beat most fair decks, but you can also flip it at the end of their turn 4 and then untap with countermagic up.

If you’re to build Modern decks, you should probably operate under two different assumptions. If Eldrazi as a deck disappears, then I don’t think it’s important to be able to kill bigger creatures, and I would try to play something a little more aggressive based on Todd Anderson’s RUG list from before the PT:

Thing in the RUG

Delver and Thing in the Ice are not a great combo (you flip Delver then have to replay it) but I think it’s still fine to play both cards, as Delver costs only 1 mana (so you can replay it easily) and Delver still hits them for a decent amount before that, which hopefully shortens the clock for the 7/8.

Still, in UR, another option is to sideboard it in Storm decks since it’s a cheap, big creature that isn’t affected by graveyard disruption.

If Eldrazi is not fully banned, then it may still be important to kill bigger creatures (though hopefully people aren’t playing Eldrazi Displacer at that point). In this case, I’d try a slightly slower version with either white or black, perhaps with some Wall of Omens and Restoration Angels as well as Cryptics, which can help hit for the final 7 (and maybe even Ojutai’s Commands to bring it back, though this is probably ambitious).

Another creature that I think pairs well with Thing in the Ice is Dark Confidant. I haven’t seen a lot of Bobs in Modern lately, but it helps drawing spells to flip it and then it gets bounced once you do so that it’s no longer a liability. I think Liliana is also good with it since it offers an 0/4 wall to protect it in the early game, and then you can bounce something and discard it if they’re empty handed. In UB, I’d try something like this:

UB Thing in the Ice 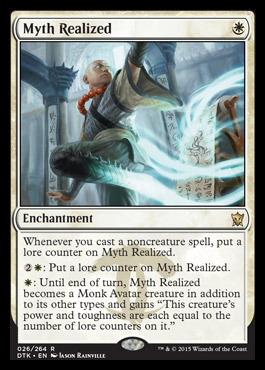 Finally, for a different approach—and I am not sure this would work—I would like to try a UW version with Myth Realized, which is a card that wants you to play a lot of cheap spells and benefits from clearing all blockers.

Thing in the Ice/Myth Realized

Of course, you can also mix and match the colors and play BUG, UBW, RUG, or any variation you want—the “core” of the deck is always going to be cantrips, Snapcaster Mage, and Thing in the Ice, but the rest is still up in the air.

[Editor’s Note: This article mistakenly stated that Myth Realized would trigger Thing in the Ice.]