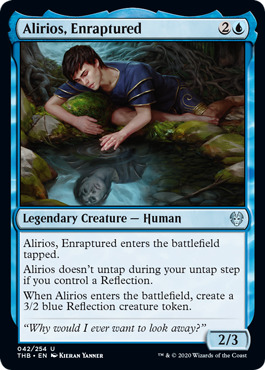 Thassa is so hot right now, so anything with a ETB effect is looking pretty good these days. Alirios gives you 5/5 worth of stats for three mana, even if you get it in installments, and is just slightly outside of what most decks wants. 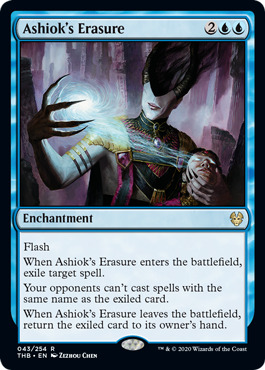 I like there being safety valves in Standard, and Ashiok’s Erasure is a good way to combat combo decks or decks built around a specific card. This is a little vulnerable to removal, but against decks that can’t kill it, it operates as a counterspell with significant upside. 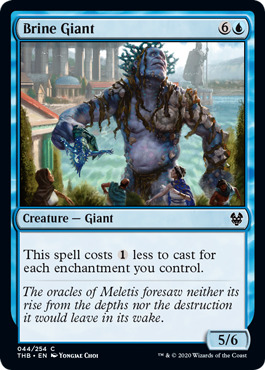 This is just here so I don’t get brined. 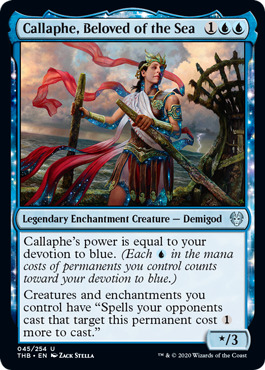 Callaphe, Beloved of the Sea

Callaphe really needed to have the full Kasmina text, because as is she falls a little short. I do like that she’s an enchantment and a powerful creature, but her protection ability lacks some oomph. 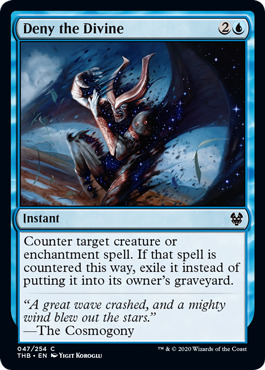 You can’t deny that there are better counterspell options floating around, though the exile clause isn’t bad. I like that this costs only one blue mana, and if this does see play, it’ll be as a splash. 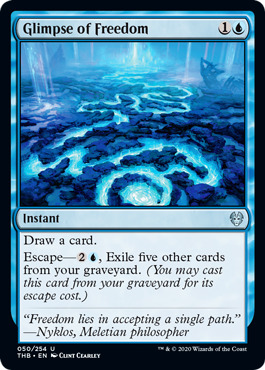 This isn’t that far apart from Think Twice, though games of Constructed move a little faster these days. The biggest downside with this is that you can’t escape it when you really want to, which is turns 3-5 (or at least you normally won’t be able to). 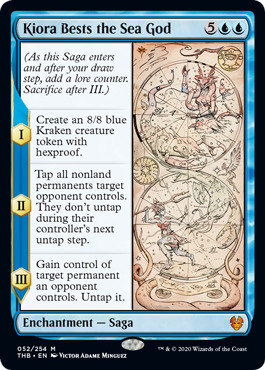 It pains me not giving this a higher rating, as I’ve been drafting a ton and this is just absurd in Limited. However, in the land of 60 card decks you play against things like “counterspells” and “sweepers”, which make this way less of an auto-win. I could see this being a sideboard card for midrange matchups that feature board stalls, but it’s a bit pricey for maindeck inclusion. 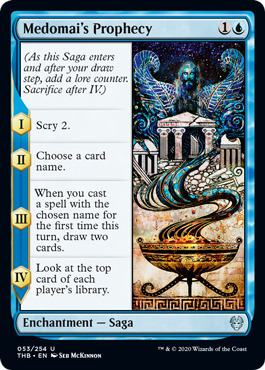 The battle between this and Seaordain will continue to rage, as both cards offer very similar effects (and both are quite good). Medomai’s Prophecy works best in decks that don’t care about leaving mana up, as it doesn’t play well with counterspells, but you do get a scry 2 + a draw 2 (plus a little looksie at the top of their deck). That’s a lot of action for 2 mana, and it’s exactly what some decks will want in order to get rolling. I like this in any blue deck that doesn’t need to curve out or leave mana up, and am prepared to hear about the good word of Medomai many times over the course of Standard. 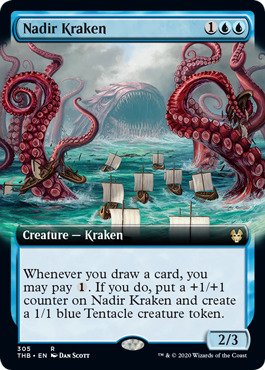 The world out there is tough for creatures, as ones that aren’t super burly or provide value immediately tend to fall by the wayside. Still, Nadir Kraken could be something that blue control decks side in when the removal comes out, as that sort of juke can work out nicely. This is very powerful if left unchecked, and goes off if you have any other sort of card draw. 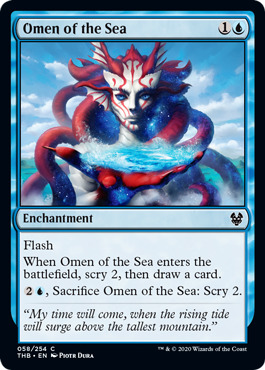 Omen of the Sea

This is a flash mage’s option for 2-drop card selection, as Omen plays quite well with counters. You also might choose this over Medomai’s Prophecy if you want something that sticks around, as this counts for devotion and doesn’t leave until you really run out of things to do. Cards like this make Standard more enjoyable, as they make decks flow better and have a little something extra to do in the early or late game. 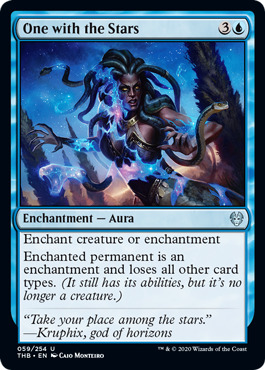 One with the Stars

It’s like Dancing with the Stars except that it never ends and I’m actually interested in it. This isn’t the most ridiculous way to get a Banishing Light in blue, though the extra mana is very costly. 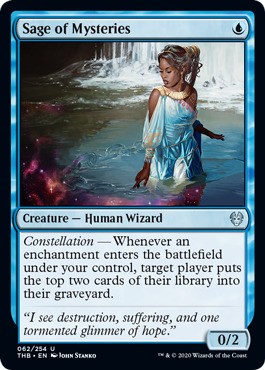 This is exactly the kind of card people love building around, and I’m not going to stop you. If you want to self-mill in a Constellation deck, it’s no mystery as to who you should call. 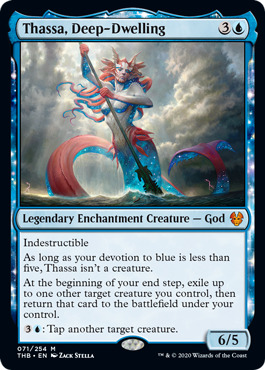 Thassa is one of the most exciting cards to come out of Theros, and she is performing exceedingly well. Martin Juza is a huge fan, and wrote about a bunch of Thassa brews here, and just about everyone on Twitch is taking advantage of her blink ability. What Thassa does so powerfully is re-trigger enters the battlefield abilities every single turn, all while being quite hard to kill and providing a couple other minor benefits. In a long game, tapping down creatures can actually matter, and some decks do reliably get to five devotion. That is a TON of action for just four mana, so don’t sleep on getting your Thassas (nobody else is). 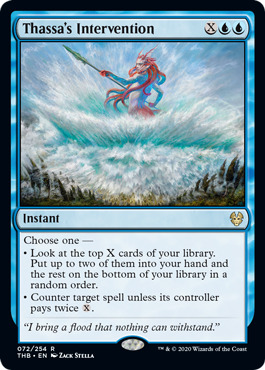 I always harp on how good flexibility is, and Thassa’s Intervention has it in spades. Having a counterspell/card draw split card is what I’ve always dreamed of, and this really delivers. For 3-4 mana it acts as a counter, though you may have to pay more in the lategame, and for 2UU it draws you two cards. If you have extra mana lying around, you can make it see more cards, but most of the time you’ll end up just casting it for four mana. Thassa’s Intervention is a great card, and it will see play across a variety of decks.

This is an Omenspeaker upgrade for mono-blue devotion decks while also being a cheaper Lab Maniac. Those are two wildly different modes, but both are powerful, and this will see plenty of play. Note that it’s like scrying but not quite, as you can keep one card max, so make sure to resolve it correctly (I think it’s because scry 5+ is very cumbersome, but picking the best card and putting the rest on the bottom is not). 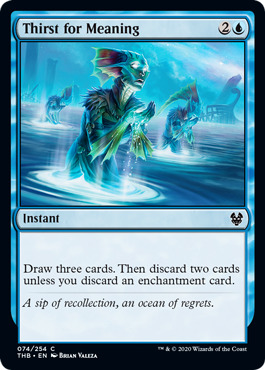 Thirst is an excellent card, and has plenty of support in the set. Instant-speed card draw is a valuable resource, and between Thirst, Seaordain, and Thassa’s Intervention, flash / control decks have a ton of options. This one even plays nicely with Omen of the Sea, as it gives you the perfect card to discard. 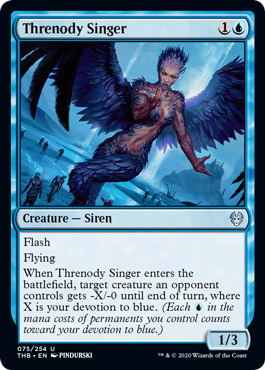 Threnody Singer looks like purely sideboard material, as it can put a real damper on aggressive decks. It’s not the most powerful card, but it can ambush a 2/1 like nobody’s business. 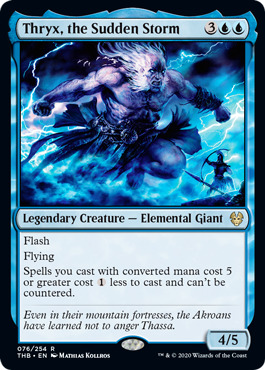 Thryx are for kids (and control players). This hops in end of turn, can ambush things midcombat, and even makes subsequent expensive spells better. This is still somewhat vanilla, but it’s got the stats to make a real run at seeing play. 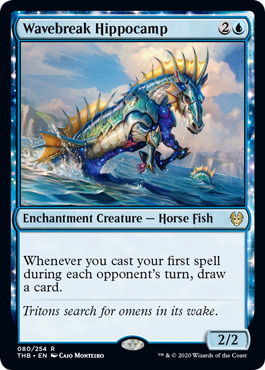 Playing Hippocamp on turn four with a one-mana spell seems pretty sweet, and if a flash deck ever untaps with this in play I suspect the opponent will be quite unhappy. It’s not the most robust threat, but it’s a cheap source of card advantage in the right deck. This is the kind of card that you always feel like you are losing if you can’t get rid of it, which is a good sign when it comes to power level. 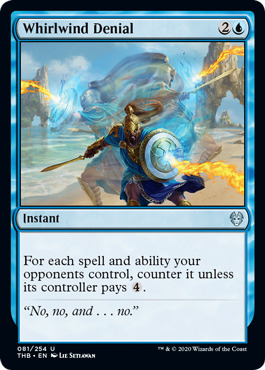 Whirlwind Denial will see a good amount of sideboard play, and may even do so across multiple formats. It’s a powerful effect, and gives us a new take on the Flusterstorm/Summary Dismissal/Mindbreak Trap experience. More options is good, and this could be a solid answer to decks throwing out a ton of triggers, since the 4-mana payment isn’t going to help them if it’s trying to counter 5+ effects at once.

3. Omen of the Sea // Medomai’s Prophecy // Thirst for Meaning

Blue also did quite well, with an awesome engine card and FOUR good card draw spells. I like Intervention a tad more than the rest, though honestly all of these are very close together, and different decks will want different options.