We finally get to take a glimpse at the full preview of Amonkhet, and I love everything about the flavor of the set.

But I had a tough time getting into the previews this time around because of the uncertainty of the format. I looked at the cards and kept thinking: “But what about Saheeli Combo?” I’ve heard similar reactions from many of the players, who were eager to tackle Constructed as soon as the full set preview was out.

We haven’t heard yet about any potential bannings, but my prediction is that both Felidar Guardian and Gideon, Ally of Zendikar will get hit with the ban hammer.

Saheel Rai combo should not exist in Standard. Having admitted they made a mistake leads me to believe that they’ll own up to the mistake in this new Standard format, breathing new life into Standard. I’m more confident that part of the Cat Combo will be banned than in Gideon, Ally of Zendikar, but I think now is the right time to get rid of both.

Gideon has been not-so-quietly the best card in Standard since it was printed, and with a new Gideon on the block, I think it’s time to say goodbye to the Ally of Zendikar.

Looking at the cards, I’m really excited to see how they play out in Standard. I find some of the cards, like the Gods, pretty hard to evaluate without actually getting my hands on them. The added dilemma of not knowing what’s going on with the bannings also throws a wrench in my attempts to evaluate these cards, so I’m just going to go with my gut and evaluate the cards as I would under any normal circumstances.

With that said, I have a list of what I think are the 10 best cards in Amonkhet for Standard.

Liliana, Death’s Majesty checks off a lot of the boxes I look for from a planeswalker. High starting loyalty? Check. Ability to protect itself? Check. Powerful ultimate? Check. The problem I have with this Liliana, and why it’s low on my list, is because of its tension with Ob Nixilis Reignited at the mana slot, and its tension with Liliana, the Last Hope.

Manglehorn is a card I expect to see in main decks because of how many artifacts we see in Standard these days. Cards like Walking Ballista, Scrapheap Scrounger, or even Heart of Kiran can slot into so many decks that Manglehorn is just a great card to even include in a main deck.

With cycling helping with delirium, I’d expect to see more Traverse the Ulvenwald in decks, leaving Manglehorn as a solid utility creature to put in the tool belt.
Manglehorn’s biggest concern is that 4c Saheeli often doesn’t play many artifacts, except for maybe Walking Ballista in small numbers. But Manglehorn has a lot of utility even against Saheeli Rai combo because Saheeli Rai creates artifact copies that will come into play tapped thanks to Manglehorn’s second ability.

Drake Haven is a tough card to evaluate, because it seems like it’s either going to create an archetype on its own or fall flat. I’m tempering my expectations with this card because it looks a little clunky for modern day Magic, but the effect is extremely powerful.

Drake Haven seems to me like a beefed-up Lightning Rift, but in a new age of Magic where a card like Lightning Rift just might be too slow. I think the build-around potential and the abundance of cheap cycling cards in Amonkhet give Drake Haven a chance to break through in Standard. I really hope I get to cast this card a lot in Amonkhet Standard, because I love the design.

It’s not too long ago that I heard multiple people begging for a reprint of Magma Spray to combat the high number of Scrapheap Scroungers in Standard decks. Magma Spray is an excellent role player for this exact reason, and a card I expect to see a lot of in Standard. With the addition of embalm to the format, this effect will be in even higher demand.

The one real problem I see with Magma Spray is its tension with Shock, a card that can go after planeswalkers, which is only important because of the existence of Saheeli Rai/Felidar Guardian combo. If either of the combo pieces get the axe in the upcoming banning announcement, I expect to see Magma Spray replace virtually all copies of Shock. 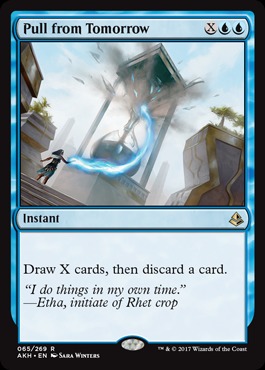 Pull from Tomorrow is the exact kind of card we’ve been looking for to help control decks for a while now. It’s an instant-speed draw X spell, so it scales throughout the game to keep the control deck from drawing flat when it has turned the corner. I think this card will do some real work in Standard, but unlike Sphinx’s Revelation, you may not see it as much as you’d think.

Pull from Tomorrow has one major obstacle getting in its way, and that’s that it doesn’t work really well with Torrential Gearhulk, both as another expensive spell, and an instant that doesn’t cooperate with it. I still think we’ll hear plenty of, “and then my opponent ripped Pull from Tomorrow” stories, but I think this card will be played in smaller numbers because of that tension, which keeps it lower on my list than maybe it deserves. That said, I’m really excited to cast my first big Pull from Tomorrow.

Censor is an excellent design for a counterspell. It’s easy to cycle once it’s irrelevant, and can break up the opponent’s curve in the meantime. This is a card I expect to see many copies of in blue Standard decks, and will change how we play games of Standard against these decks altogether.

Early in the format I’d expect to see a lot of this card until players adapt to it, and then the utility of Censor will still be there without having to actually play it, leading people to play other cards. Once Censor starts to disappear from the common builds, I’d expect smart players to put it back into their deck to capitalize on the assumption that they don’t have it.

Glorybringer is the best red haste flyer we’ve had since Stormbreath Dragon. The ability to pressure planeswalkers, kill creatures, and clock the opponent all in one card makes Glorybringer exceptional, and it should be a staple in Standard moving forward.

Gideon, Ally of Zendikar may have met his match with Glorybringer, but I know another 5-mana 4/4 flyer that can absolutely wreck Glorybringer. Archangel Avacyn lines up well against the Dragon and will create some interesting in-game decisions where you might cast a Glorybringer into 5 mana and not attack. I have high hopes for Glorybringer, but I’d keep my eyes out for an Avacyn ambush.

Cast Out is high on this list because I think it will be a staple in Standard decks for the foreseeable future. With cycling added to a card, you can increase the mana curve in your decks a little without having to worry too much about flooding on 4-drops like Gideon. Cast Out will be played in some number in every white deck because of its versatility as an answer and its ability to cycle.

We haven’t had a solid single-colored, instant-speed way to remove a planeswalker since Hero’s Downfall, and while I don’t think Cast Out is quite as good since it’s an enchantment, the ability to interact with planeswalkes is imperative in a format with Saheeli Rai combo and Gideon, Ally of Zendikar running around—well, maybe. 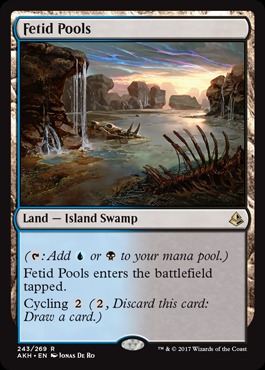 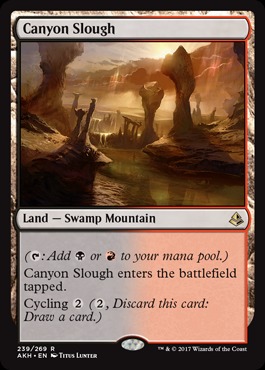 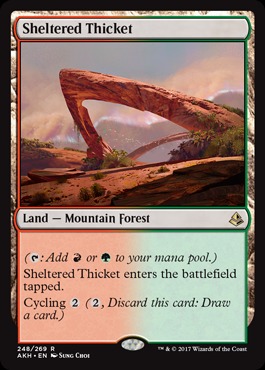 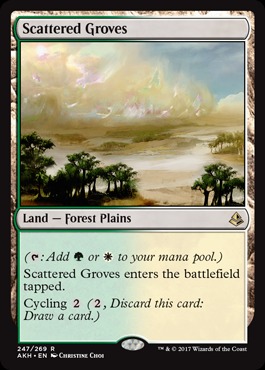 The cycling dual lands are an obvious inclusion in the Top 10 cards because of how important it is to have functional mana in Standard. Cycling lands are unique in that they can help you smooth out your draws when you flood, similar to the scrylands from Theros. I do think that these cycling lands have people a tad bit too excited, however.

Scrylands were so great because they gave you value when you played them, and helped you hit land drops early and spells late. Cycling lands only help with mitigating flood, and have the downside of entering the battlefield tapped with no additional effect early. While still good, I think they’re a bit worse than the Temples we all loved.

The cycling dual lands have a natural synergy with the hand lands from Shadows over Innistrad. You can play those lands early, revealing the cycling lands, and then later you get to cycle away your excess lands. This leads to some interesting deckbuilding decisions in 3-color mana bases—a process I am personally dreading.

Cycling lands also allow you to play a higher land count because there is less risk of flooding, which is a huge boon to control decks with cards like Pull from Tomorrow around that feed on hitting more land drops.

Cycling lands will see tons of play in Standard. That you can count on.

1) Gideon of the Trials

This card is tough to evaluate, especially with the uncertain future of Gideon, Ally of Zendikar. That said, I’m going to rate this card on power level alone and let Wizards sort out whether Gideon, Ally of Zendikar will stick around. If it is still legal, I’d expect to see a lot fewer Gideon of the Trials, but if it’s not, he’ll slot right into aggressive Heart of Kiran decks.

Gideon of the Trials is a potent 3-mana planeswalker that has two good abilities. The ability to protect itself and turn into a hard-hitting threat makes it a great 3-mana play, and probably one of the better followups to a Heart of Kiran in the format. At 3 mana, Gideon of the Trials can get under some counter magic, making it difficult for a control player to deal with in the early game.

The ability to create an emblem that prevents you from losing the game is a cool ability that is similar to Gideon Jura’s ability to force an attack, but also has some added utility with Glorious End, allowing you to put a Time Walk effect in your aggro deck. Perhaps this emblem will even lead Gideon of the Trials to break through into other formats.

There you have it. These are the top 10 cards I think we’ll see in Amonkhet for Standard. Let me know what you think is the best card I missed down below. Happy Brewing!