Time to transition. It’s been fun spending the past few weeks enjoying Legacy and Eternal Masters, but it is time to get back to the bread and butter of Magic: Standard.

I know a few things about Standard beyond a reasonable doubt. There is a high degree of diversity amid the various flavors of green, white, and green/white decks that inhabit the top tier of the Standard metagame. Tokens, Collected Company, and White Weenie (and all of the various iterations of these archetypes) are dynamic archetypes.

Today, I’m going to present the particular flavor of GW that I find most enjoyable at the moment. Naya has been around in the format for awhile, but has always been in the shadow of GW Tokens and CoCo. Here is my take on the deck:

Once again, as has been the case for a while now, I arrived at my particular Naya Planeswalkers list by taking averages of top performing Naya decks and then blending the results.

25 lands, 12 creatures, and 23 spells seems to be the average composition of the main deck. But after playing some games, I opted to add an additional land because making sure that you hit 6 lands for Advocate is critical. 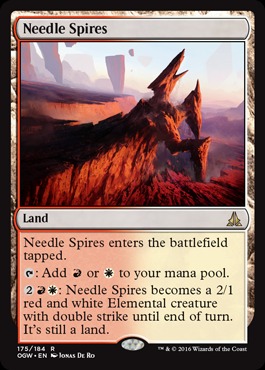 The deck also has Needle Spires for threat insulation. Sylvan Advocate is also one of the most powerful cards, pound-for-pound, in Standard, and it is at its absolute best in a deck like Naya with creaturelands.

This Porridge is Too Medium

While I acknowledge that GW Tokens is the defining deck of Standard, I also recognize that I simply do not enjoy playing it. My teammates and I correctly identified that the deck was as good as advertised and played it in back-to-back Grand Prix. I hated every minute of it.

I’m not saying it isn’t a great deck. It is. The reason I didn’t like playing the deck was that it ran too close to the middle. In every matchup, the goal was to sit there and hope that my opponent didn’t get too aggressive or go over the top. I had to just sit in the middle and hope that my mythics were good enough to beat people who played more than one spell per turn or, heaven forbid, cast instants.

Tokens was good at being flexible at navigating the middle. It could be kind of aggressive. It could also be kind of controlling. It didn’t excel at either.

I respect a deck that can do multiple things. I respect GW Tokens as a deck I’d need to be prepared for. I just don’t want to position myself so close to the middle.

I didn’t like playing a deck wasn’t great at being aggressive or defensive, despite the fact that it can adopt either role depending on the matchup. The fact that it can do multiple things is what makes it such a winning strategy.

Gideon is the perfect flagship card for GW Tokens. The card can be aggressive. It can be grindy and generate card advantage. It is synergistic. It is likely better or more powerful than the majority of cards in your opponent’s deck.

Tokens is made up of a bunch of cards like Gideon—it is powerful and floats in the middle of the curve. But anyone who is dedicated to going under or over the top can exploit your “mediumness.”

I wanted to play a deck that had the raw “powerful cards” like GW Tokens but was positioned further on the controlling end of the spectrum—that is why I was drawn to the Naya Planeswalker deck.

I love that the Naya deck goes bigger than traditional GW and also has more cards in its tool box to stop people from going underneath.

Radiant Flames and Chandra were cards that made me drool with envy when I saw people splashing red! The ability to sweep up a mess of CoCo or Human creatures to protect myself would have been sweet. 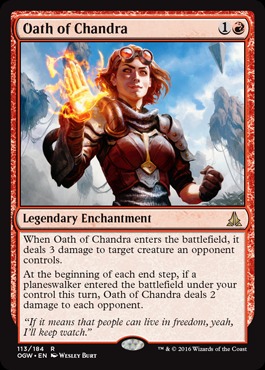 Another card that has really impressed me is Oath of Chandra. It kills lots of things on turn 2 that are annoying, and the added advantage is quite nice. It’s a really nice removal spell in the format that has a lot of synergy with the planeswalker theme.

The deck also pushes the Superfriends Planeswalker theme a lot harder than Tokens.

It is sweet to have 3 or 4 different, unique planeswalkers in play at the same time!

I also like that the deck has even more planeswalkers than GW Tokens and can use that to its advantage against controlling Languish decks post-sideboard where sweepers like Radiant Flames are not good. Needles Spires is also great in those matchups.

Both of the multicolored planeswalkers have impressed me in testing. In particular, Nahiri is an insane Magic card. She is difficult to attack to death in combat and does a great job of coming down and protecting herself with the minus ability.

I also love that Nahiri’s ultimate can fetch up a singleton Dragonlord Atarka or Dragonlord Dromoka (after sideboard) to decimate an opponent’s board in a stall. Atarka is pretty great in the deck already, but the tutor ability to find it is especially spicy.

I like the fact that the Naya take on a GW Tokens deck can become a controlling and removal-heavy deck. I enjoy having access to Radiant Flames in the main deck and even more after sideboard!

If you are looking for something with the raw pound-for-pound powerful cards of GW Tokens that has a little more of a controlling edge, Naya may be the deck you’ve been looking for.