Ravnica Allegiance Standard is overwhelming. Now that every color pair has eight excellent dual lands, there are basically no limits to what you can do with your colors and mana base. Players can brew 2- and 3-color decks in any combinations that they like, and fill them with a selection of great cards pulled from Ixalan through Ravnica. Anything that was good before Ravnica Allegiance is still playable. And yet, white, red, and blue aggro decks do police the format in a serious way. All of this hangs under a cloud of uncertainty about how good Wilderness Reclamation and Nexus of Fate actually are. It’s a lot to navigate.

What I can do today is help you organize your thoughts about this new format. I’ll present a handful of pillars of Standard that stand as the broad archetypes you should be prepared to face. There will still be a tremendous amount of variation within these pillars, but if you can understand what these archetypes are trying to do, and why they exist, then mastery of Standard can easily follow.

Sultai is the baseline best deck. It’s a direct evolution of Golgari, which was one of the best decks before the printing of Ravnica Allegiance. The major gains were Hydroid Krasis, and the ability to splash blue for permission spells in the sideboard. These two additions give Sultai inevitability in the late game, even against control decks, and make it a lot more difficult to prey on with anti-midrange cards like Nexus of Fate and Star of Extinction.

This is a quintessential midrange deck. And a really, really good version of it, at that. It has a wide range of versatile and punishing answer cards. It presents hard-hitting threats that demand answers, and it has a late-game engine that ensures it will never run out of gas. Best of all, it seems to generate card advantage on virtually every turn, with virtually every exchange. Sultai is very hard to beat in a fair fight.

Ravnica Allegiance Standard is tough to nail down because the recipe of, “choose my colors, choose the cards I like within those colors,” often results in a reasonably competitive deck. Oddly enough, however, Sultai doesn’t really fit this bill. While there can be variation in individual card choices, the core cards of Vivien Reid and Find // Finality actually put some fairly stringent deckbuilding constraints on the archetype.

Basically, the deck is all about creatures. If you start cutting your Ravenous Chupacabra and Jadelight Rangers, suddenly your Vivien Reid’s aren’t finding you versatile value cards. All of a sudden, you find yourself unable to cash in Find // Finality as a double-Raise Dead for midgame value. Sultai needs to keep a high creature density and because of this, I predict that it will exist in more or less the same form for the entire lifespan of this format.

There are plenty of decks that can beat Sultai in game 1, but it improves against everything after sideboarding. The only decks that feel decisively ahead against Sultai in a best-of-three match are Izzet Drakes and Mono-Blue. 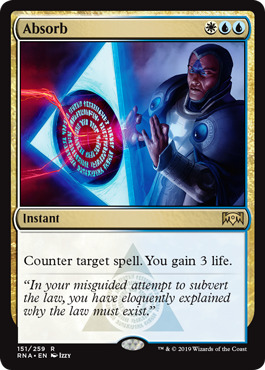 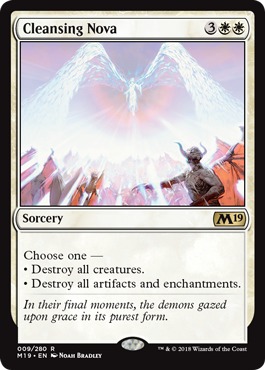 Key cards: Teferi, Hero of Dominaria, Absorb (or other permission spells), Cleansing Nova (or other board sweepers)

Control has great tools, and is nicely positioned in Ravnica Allegiance Standard. The mana is good, there’s a healthy suite of well-costed reactive cards, and Teferi, Hero of Dominaria remains one of the most powerful cards in the format.

In most formats, you’d expect a slow deck with lots of tapped lands to be a sitting duck against fast aggro. Importantly, this is not the case in today’s Standard. Deafening Clarion, Kaya’s Wrath, and Settle the Wreckage are extremely punishing against creature decks, and there’s tons of incidental life gain from stuff like Absorb and Revitalize.

Permission spells set you up well against Nexus of Fate strategies, and being creatureless in game 1 lets you stick Sultai with a bunch of dead removal. Control is squarely advantaged against Sultai in game 1, and then only needs to steal one of the two sideboarded games with a superior draw, or with a surprise creature like Thief of Sanity. This is a totally valid strategy, particularly for the early days of the format. But I think it’s important that control players accept they’ll never be advantaged post-board once a Sultai player knows their sideboard plan.

Control is a prime example of a customizable archetype that can be built in basically any color combination. While Teferi is the single most recognizable control card, some players have had success avoiding him entirely and turning to U/R or Grixis instead.

That said, the color combination you’re most likely to run into right now is Esper.

Control is well-rounded, and a master of the archetype doesn’t need to fear too many matchups. That said, it’s also the type of deck where you’ll need to take calculated risks in the matchups you prepare for, or hope to dodge. More board sweepers will make you strong against aggro, but weak in the mirrors. Vraska’s Contempt will help against planeswalkers, but make you vulnerable to Experimental Frenzy—Mortify is the other way around. Gruul and Mono-Blue are two niche matchups that can be a headache for control players.

White Aggro was the biggest story of Pro Tour Guilds of Ravnica, making up six of the Top 8 decks, and proving itself to be one of the format’s best decks on raw power level. Even with new printings for other archetypes, it would be folly to forget about the Knights and Soldiers of Standard.

When it doesn’t have a big target on its head, and when many of the decks are striving to outdo each other with big mana plays, White Aggro is primed for success.

Benalish Marshal being a key card means that the mana base for White Aggro is fairly restricted. But Hallowed Fountain and Deputy of Detentions are two printings that facilitate a blue splash into the White Weenie shell.

Magic luminaries Frank Karsten and Gerry Thompson have both poo-pooed the Deputy of Detention splash, which leads me to believe that Azorius is far from the only way to build this archetype. Heroic Reinforcements still packs a punch, and allows you to goldfish some of the non-interactive decks. And there’s still some elegance in a mono-white twenty-Plains build.

That said, I really like what Jim Davis has done with the above list. Playing just two Deputy of Detentions helps to balance the mana curve, and reduces the damage of failing to draw a blue land. For Jim, the main appeal of blue is the permission spells in the sideboard, which are as good as gold in a world where people are trying to beat you with clunky board sweepers and Root Snares.

White Weenie’s primary weaknesses are a vulnerability (at least in game 1) to board sweepers, and a bad matchup against Red Aggro.

Which brings us to our next pillar of Standard: the color red. To put it bluntly, red is packing heat right now. Just like White Aggro, it was a successful archetype pre-Ravnica Allegiance. Red, however, has picked up two staple 4-of cards that are powerful enough to make waves in Modern and Legacy.

Between Wizard’s Lightning and Skewer the Critics, it takes minimal effort to build decks with access to eight Lightning Bolts. Light up the Stage is a 1-mana draw two that facilitates a low land count, and plays well with Experimental Frenzy. By the way, lots of decks still can’t beat an Experimental Frenzy…

There are lots of ways to build red decks. Even Goblin Chainwhirler, while an excellent card, isn’t an automatic 4-of. You can build hyper-aggressive Wizard Red, you can build burn-heavy decks with Electrostatic Field and Guttersnipe, and you can build Big Red that curves up to Rekindling Phoenixes and Siege-Gang Commanders.

And that’s not even to mention splash colors. Rakdos is a powerful guild, and you can do anything from Mono-Red Chainwhirler with black dual lands for Rix Maadi Reveler, all the way to dedicated Rakdos Aggro decks featuring Gutterbones and Judith, the Scourge Diva.

So far, Red hasn’t been one of the more successful archetypes on the SCG tournament series, but it’s still an important player. The metagame could take a turn where Red Aggro becomes very strong. More importantly, this might be one of the archetypes that’s still in its infancy, and will become stronger once we figure out the very best home for these hyper-efficient cards.

Wilderness Reclamation is the boogieman of Standard. Many of us tiptoed into the format with a deep-seated fear that TurboFog (or Turboturns) would become a dominant—and frankly unfun—overlord. So far, that hasn’t exactly come to pass, but Wilderness Reclamation exists and is an archetype to keep a very close eye on come Mythic Championship Cleveland.

Not all Wilderness Reclamation decks play Fogs. Some don’t even play with Nexus of Fate. But what they all have in common is the desire to operate at instant-speed, and to spend tremendous amounts of mana in the mid- and late game. You can find these decks in Simic, Bant, or Temur, and a few particularly interesting takes on the archetype are based on Guildgates!

What I said about control also applies to Wilderness Reclamation decks, but in an even more extreme way. Most opponents will be unprepared for the niche, creatureless strategy in game 1, but things will get much tougher once every opponent brings in permission and discard spells.

Key card: Hero of Precinct One

Hero of Precinct One can find a home in Selesnya, Azorius, Esper, Bant, Mardu, and pretty much any other color combination you can think of. You can generate triggers from cheap freebie cards like Flower // Flourish, Incubation // Incongruity, Discovery // Dispersal, or Footlight Fiend. You can choose your other creatures to be multicolored all-stars like Deputy of Detentions, Emmara, Soul of the Accord, or Thief of Sanity.

If you play Hero and your opponent doesn’t answer it, it can dominate the game. And all of this comes at the low-risk price of 2 mana.

Hero of Precinct One isn’t dominating the format, due in part to its vulnerability to Goblin Chainwhirler and Find // Finality. But you can imagine that such a powerful card, with so much flexibility in the way you can build around it, might hold some serious potential for the future of Standard.

There are plenty of competitive Standard decks that don’t fit cleanly into one of the broad pillars I’ve established above. But I believe that these are the decks that most solidly define Standard. I believe they’re the ones that will continue to win, to evolve, and to stand the test of time. If your testing gauntlet includes a deck from each of these six pillars, then you’ll be well-prepared for your next Standard event.