Have you ever played a game of Modern in which you still didn’t know what your opponent was playing, or even trying to accomplish, as late as turn 3?

It doesn’t happen to me a lot—I spend hours scouring deck lists to either create content or find new decks to play. But not everyone has the same mindset—some would rather just play what they already know and have mastered. The downside comes when you face tier 3 or tier 4 decks that you have never faced before, and because you never did the research, you don’t know what’s going on.

I’m going to share that knowledge with you. I’ve selected decks that don’t regularly win tournaments, but that you can easily face in a given event.

I’m going to discuss how to identify these decks, what some of their interactions are, and what you can do about it.

If you weren’t around in 2015, you missed the rise and fall of this archetype. Over the span of approximately 8 months, it became the best deck in Modern. Then one of its key cards, Summer Bloom, got banned.

Hayseed, 5-0 in a Competitive Modern League

Since then, it hasn’t been making much of a splash, but it still exists in a slower form.

It has technically replaced Summer Bloom with Sakura-Tribe Scout, but because that makes getting tons of mana less reliable, it also went down on the number of Pact of Negation and cantrips, such as Serum Visions. Instead, people have moved toward a more midrange game plan with cards like Tireless Tracker, Engineered Explosives, Relic of Progenitus, Thragtusk, Hornet Queen, and many more. It’s hard to tell exactly what they’ll have, because there isn’t a consensus deck list. But their unusual cards will often have converted mana cost 0 so that they can get it with Tolaria West, or green creatures to fetch with Summoner’s Pact.

In the early turns, they are likely to use Gemstone Mine aggressively since they have bouncelands (Simic Growth Chamber, Gruul Turf, etc.). Then it should be very easy to identify that they are Amulet Titan because their early plays will be Sakura-Tribe Scout or Amulet of Vigor, or Ancient Stirrings, which will reveal a card not typically in Tron, Bant Eldrazi, or Ironworks Combo, making it obvious they are Amulet Titan.

Just by looking at the deck list above, you’ll see that they have a high concentration of cards that you only find in this archetype.

Once they’ve accomplished their main goal of getting a Primeval Titan into play, there are two basic directions they will take.

Generally, if they also have an Amulet of Vigor in play, they will fetch Slayer’s Stronghold and Boros Garrison, giving haste to the Titan and attacking with the second trigger. If they either have 2 Amulets or access to 2 extra mana, they will then get Vesuva (which will copy Boros Garrison) and Sunhome, Fortress of the Legion, giving it double strike. That deals 20 damage if they had 2 Amulets (because Slayer’s Stronghold can pump twice). Otherwise it’s 16.

If they think that their Primeval Titan will die before killing you, they will get a bounceland and Tolaria West, bounce the transmute land back to their hand, and use it to get a Summoner’s Pact, which results in another Primeval Titan. Because of that specific interaction it’s quite hard to grind them once they get that going, so don’t think your Path to Exiles will be enough to defeat them.

Blood Moon is the single best card against them. Any type of land destruction is very good as well. Keep in mind that you can respond to a bounceland’s enters-the-battlefield trigger—that’s especially useful if they have Azusa in play and you have a Ghost Quarter or Fulminator Mage.

Artifact removal is good to some extent—if you can catch their Amulet it’s nice—but because the deck had to become a more midrange deck that is less all-in, they don’t rely on it as much and you wouldn’t want to lose the game because you drew your Shattering Spree and they slammed Thragtusk and Oracle of Mul Daya in your face. A more versatile card like Kolaghan’s Command would be perfect.

Also known as Green-White Hexproof, Bogles isn’t anywhere near as complex as Amulet Titan. Yet, it’s another deck that used to see much more play and has really fallen off the map lately, and so players that got into Modern recently might not be completely familiar with it.

Dreamcrusher119, 5-0 in a Competitive Modern League

Gryff’s Boon and Unflinching Courage are cards you will sometimes see instead of Cartouche of Solidarity. Although, that one is pretty nice as it’s a great way to fight Liliana of the Veil. 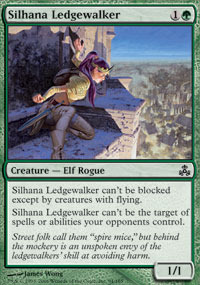 If you see Silhana Ledgewalker, it usually means they don’t play Kor Spiritdancer, so you can board out your targeted removal spells.

Keep in mind that if they mulliganed a lot and are leading with Windswept Heath or any other green fetchland, they can then get Dryad Arbor and start dumping all their Auras on it. Don’t go out of your way to keep a removal up though, because someone leading with a green fetchland and passing can mean many decks that aren’t necessarily Bogles.

There isn’t much that you can control against this deck, but it’s good to keep in mind that if they don’t have Rancor or Spirit Mantle, you can chump-block their gigantic creature. For example, as an Abzan player, you could easily end up buying a ton of time because of Lingering Souls and then eventually draw a game-ending Liliana of the Veil.

If you’re holding say, an Abrupt Decay and they have a Gladecover Scout with Hyena Umbra on it and they cast Daybreak Coronet, it’s very important to know that you can destroy the Umbra in response and the Daybreak Coronet will fizzle.

All is Dust is likely the single best card against them—Oblivion Stone is pretty great too. Chalice of the Void on 1 turns off a large number of cards.

Having blockers that can be sacrificed, such as Viscera Seer and Arcbound Ravager, is a great way to race lifelink.

Keep some amount of removal. Killing Kor Spiritdancer is important, and don’t give them the possibility to keep a hand that can just go all in on a Dryad Arbor.

There are still 9 other decks I want to cover. Stay tuned as my next article will go over a few more!