I haven’t been terribly happy with Modern Jund for a long time. Since the banning of Bloodbraid Elf and Deathrite Shaman, it hasn’t had the kind of raw power that we’ve come to expect from a Modern deck. It’s remained solid and you can customize it to beat any matchups that you’re specifically gunning for, but in recent months, I’ve simply felt like Jund has been pulled in too many different directions all at once, and it’s only just kept itself from being torn completely apart.

But because of Jund’s many years of service, it always deserved a second chance after a big shakeup to Modern. I wasn’t particularly optimistic since Splinter Twin tended to be a positive matchup for Jund, but I gave it a try anyway.

I couldn’t have been more surprised. Or more pleased! Jund is winning a lot, and is particularly excelling against the decks that I expect to be most represented at the Pro Tour. After a while, I came to understand the four reasons why the banning of Splinter Twin and Summer Bloom was great for Jund:

For those reasons, as well as our experience with the deck (and the fact that we enjoy playing it), teammate Shahar Shenhar and I have chosen to play Jund for Pro Tour Oath of the Gatewatch.

The major update is the addition of Kalitas, Traitor of Ghet. This is a card that’s tailor-made for a grindy, kill-everything-the-opponent-plays deck like Jund. If you untap with him and a removal spell, the tide of the game swings incredibly quickly, and it becomes hard for the opponent to keep their head above water. Slaughter Pact, Seal of Fire, and Liliana of the Veil can sometimes give you immediate value by taking out a creature the turn you cast Kalitas.

He’s at his absolute best against Abzan Collected Company. Not only does he completely shut off the Melira, Sylvok Outcast-plus-persist combo, but their deck is filled to the brim with 1- and 2-toughness creatures that become huge liabilities the minute he hits the battlefield. As a 3/ 4 lifelinking body, he’s also excellent against Burn and has applications against Arcbound Ravager and Kolaghan’s Command.

In a format as fast as Modern, and in a tournament where I expect a lot of Goblin Guides, Signal Pests, and Glistener Elves, I wanted some extra 1-mana removal. 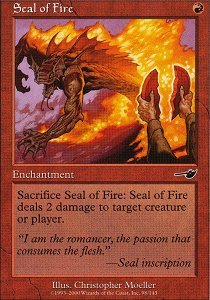 Seal of Fire earns its slot in the main deck because it pumps Tarmogoyf and because you can invest in it early, and pop it on the turn you play Kalitas, Traitor of Ghet. Frontloading your mana also helps you win crucial battles against Infect, or against Affinity players trying to ambush you with a Cranial Plating. Other bonuses come up as well: For example, if you’re playing against Grixis Control and need to double-burn a Gurmag Angler, they can normally blow you out by countering your second Lightning Bolt. If you cast Seal of Fire first instead, you won’t risk losing both cards to a single counterspell.

Disfigure in the sideboard may seem like an odd choice for a deck that has access to red burn, but it’s exactly the fact that Disfigure is not red that made us select it. For one thing, it can kill protection from red creatures like Master of Waves and Phyrexian Crusader. More importantly, though, it allows you to kill a turn-1 Goblin Guide without shocking yourself via Blood Crypt or Stomping Ground. A fairly common (and excellent) sequence against Burn is to turn 1 Disfigure their Goblin Guide, turn 2 cast an Inquisition of Kozilek or Duress, and lay a tapped land without taking extra damage.

The large number of Kitchen Finks is purely a metagame call for Pro Tour Oath of the Gatewatch. I believe the Burn and Naya Blitz decks to be among the strongest in Modern, and they will be popular choices. Kitchen Finks is the absolute best card against any opponent slinging Wild Nacatls and Eidolon of the Great Revels, and this weekend I’m packing the full 4.

Finally, we come to a couple of pet sideboard cards that I greatly enjoy. The first is Grim Lavamancer, which is a tremendous beating for creature combo players trying to win the game with Blighted Agent, Kiki-Jiki, Mirror Breaker, or Anafenza, Kin-Tree Spirit. It’s also strong against Affinity and Merfolk, and can come in for any matchup where the board can get stalled out, like Abzan and bigger Zoo decks.

Courser of Kruphix represents a fifth life-gain card against Burn. It doesn’t have quite the immediate impact of an Obstinate Baloth or Thragtusk, but is much more resilient against Atarka’s Command and Skullcrack. Courser is generally solid in all but the fastest of matchups, and since sideboarding with Jund is as much about trimming your weak cards in a matchup as it is about bringing in strong new cards, Courser is a nice choice to round out the numbers.

Jund can be built in countless different ways, and can be geared to beat just about anything. This weekend, we’re hoping to face Burn, Affinity, Infect, and other creature decks. When we are paired against Abzan, Ramp decks, and certain dedicated combo players, we’ll have to cross our fingers and hope we draw the right half of our deck. That said, there aren’t many players out there who’ll be happy to face down a turn-1 Thoughtseize and a turn-2 Tarmogoyf.