With Theros: Beyond Death coming up, I thought it would be a good time to look into the deck building underworld and rescue another one of my old builds that could use an update. I enjoyed the Gods from Theros block, and even though I don’t see them much at the Commander tables these days, I think it’s time for them to make a reappearance.

One of my favorites was, and still is, Phenax, God of Deception.

Mill isn’t always the most popular strategy in Commander, as the graveyard is so easily accessible to so many decks. In the end, though, Phenax has received so many great new toys that it’s just too tempting. So, what do we need to build a successful Phenax deck? Well, here’s the outline:

I’m going to go section by section and make sure we leave room for mana rocks, defensive cards, and land, so we’ll have intermissions between the sections. Don’t worry—we’ll get the good stuff in there!

When I think of Phenax, I always think of Walls, so let’s start there.

There are a lot of high-toughness Walls, but they’re largely not very good. These at least pretend hard enough that they’re good enough to make the cut for Phenax. Amaranthine Wall is hard to kill. Hover Barrier can fly. Mnemonic Wall rebuys something good. Wall of Frost is a great deterrent, and Wall of Lost Thoughts does some solid extra work when it enters the battlefield. If you’re a fan of tutors, this is also the place to put Drift of Phantasms, but that’s really not my style.

Of course, Walls aren’t the only defenders out there. Some have more creative creature types.

I’m highlighting Tree of Perdition because it has a whopping 13 toughness—and if you play your cards right, it can have more. Imagine swapping its toughness with someone’s life total when they’re at 30. Now you have a creature that taps to mill 30 cards, and doesn’t that sound magnificent?

We’re going to need more than six creatures, and some might need more than zero power. Here are a few that take good advantage of Phenax’s tap ability:

These creatures know how to untap themselves for more Phenax-related shenanigans. Eater of the Dead is, for once, as powerful as I thought it was when I opened it in a pack of The Dark back in the day (I thought it got to attack again when it untapped.) Endbringer is going to need some help from our mana base, but we’ll figure that out. Knacksaw Clique can untap itself, which means you can pay 1U to do more milling. Pretty powerful for sure.

These three want to get untapped, which they will after we have Phenax work his magic. King Macar turns creatures into proto-Treasure, Scaretiller helps our mana, and Siren of the Silent Song is mostly hard to say but also puts pressure on our opponents’ hands.

We’re definitely going to need more creatures than this later, but this is a good start. Time for an intermission!

I’m getting into Lockets for two-color decks because of their late-game crackability. More than half of these also make colorless mana, which is a nod to Endbringer. Unstable Obelisk is here as a release valve in case there’s a problem permanent we just can’t handle in this color combination.

Tapping these creatures once per turn cycle is all well and good, but why not get some more value?

Often seen in combos with Isochron Scepter, in this deck it’s more of a game-ending kill card. You won’t see Scepter in this deck due to my desire to build social decks, but if that’s your thing, you could obviously go off with it.

The Elixir gives creatures pseudo-haste for activating the Phenax ability, which allows you to use each turn more effectively. Umbral Mantle lets you untap a creature and tap it again, and when you do, it’s bigger and ready to mill for more. 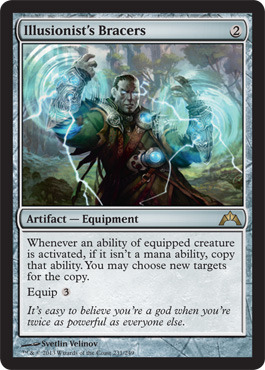 A pretty simple one here—just copy the ability. Even better on creatures that untap.

Speaking of untapping, here are some powerful Auras. Of course, they’re riskier than Umbral Mantle, but they provide a better rate for untapping. As an additional bonus, when you play Pemmin’s Aura, you turn the creature into Morphling, which can be useful offensively and defensively. (You also get to explain to your friends that the name is an anagram for I Am Superman!)

We’ll need a decent number of counterspells to defend our plan. I know there are plenty of counters that do a little incidental milling, but I’m honestly not interested in those. Why? Well, we can’t compromise on mana efficiency. If the cost of milling someone for three more cards is paying more for counterspells, that cost is too high. With that in mind, instead of Didn’t Say Please, Thought Collapse, and similar, here’s our counterspell suite:

Counterspell is a classic for a reason—if you want the job done right, hold up double blue. Disallow is quickly becoming a classic as well, with flexibility that justifies the additional mana required. Drown in the Loch has some obvious synergy with our mill plan and should not be forgotten as we think about our countermagic (and our removal.) Finally, Negate and Unwind counter noncreature spells, which is usually what you want countered anyway, and both provide a good rate.

Let’s get into the removal suite:

A couple of wraths should help us keep control of the board.

It’s also important to have point removal. I’m really warming up to Price of Fame as a removal spell, as it does a good job handling opposing Commanders. Reality Shift is a necessary inclusion, as we may need that exile effect. The other two are standard, important options as far as black removal goes.

There are plenty of other mill effects that will help us deplete our opponents’ libraries. This deck should be packing the best of the best, so let’s get started with those:

There are many lesser one-off mill effects, but we don’t dabble in lesser spells when we’re trying to mill out the table. Increasing Confusion can spell the end of the game for a single player, whereas a sufficiently large Mind Grind can chew up the libraries of all your opponents pretty quickly. Startled Awake makes the cut because of its recastability, and finally, Traumatize is simple but effective.

I want to add some more creatures to our list, and these round things out pretty well. Fleet Swallower repeats Traumatize’s effect and represents a must-kill threat. Geth mills opponents and grabs some loot in the bargain. Oona exiles cards, but we need a little bit of that—what if someone has a Darksteel Colossus or similar? Sire of Stagnation also does some exiling and, almost more importantly, helps refill our arsenal of cards.

These three do a good job of keeping the mill pressure on turn after turn. Fraying Sanity might even be my favorite of all the Curses currently printed. Psychic Corrosion gives you some additional mill in a more passive manner, as does Sphinx’s Tutelage, which has a mana sink attached as well.

A great land to have waiting in the wings. It also produces colorless, which we still need for Endbringer.

Four fantastic pieces of card draw. Into the Story and Visions of Beyond both benefit from big graveyards, whereas Mind’s Eye and Phyrexian Arena are simply reliable engines.

We do still have to have graveyard hate, though. With these in our arsenal, we won’t have to rely on cards that throw everyone’s yard into exile, meaning we can still take advantage of graveyards that aren’t being used well.

Well, a lot of our cards already do this, but here’s a set of three that add to the theme.

The Primordials key off cards that we mill, which means they’re incredibly useful in the late game as finishers. Avatar of Woe can be cast for BB under the right circumstances, and the ability to destroy a creature of your choosing is quite powerful.

Okay, sorry, one more thing before I show you the whole list. Somebody might just be packing a bunch of Eldrazi that shuffle back in or similar. If that’s something you’re concerned about, bring this one with you and tear the problem cards out of that library.

That’s pretty much it—here’s the deck list! Join me next week as, hopefully, we can start talking about some cards from the new Theros! Send me your mill deck lists on Twitter at @RagingLevine, too—I want to know how you’re making mill work in Commander.