Last time we discussed the top decks to beat in Modern, which included various builds of B/G Midrange and Splinter Twin. Today we’ll cover a few more archetypes that you’re likely to run into at your next Modern tournament.

Abzan, Jund, and Splinter Twin are well balanced, adaptable, and difficult to attack. The decks we’ll cover today are at the opposite end of the spectrum—extreme and single-minded. While easier to sideboard against, they will be far more deadly if you underprepare for them or otherwise underestimate them.

Burn is consistently the most underrated deck in Modern. For most of us, if we can find a card in our 75 that features the words “gain,” and “life,” we’re satisfied and ready to call it a day against Burn. I can’t stress enough that this is not going to work! You need a powerful and realistic plan for the matchup if you want to have a chance. At Pro Tour Fate Reforged, it was among the most successful decks, putting two players into the Top 8.

Burn is a great choice for an upcoming Modern event. Unfortunately, though, I don’t have too many groundbreaking suggestions when it comes to a deck list. The game plan is straightforward, and I’m sure that Lee Shi Tian had things pretty close to right with his Pro Tour Top 8 list.

I can recommend one interesting sideboard card in Guerrilla Tactics if you want to really punish those Abzan players. 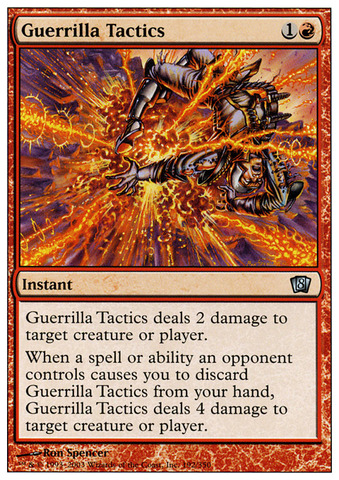 Liliana of the Veil is a good card against Burn, but it doesn’t have to be! Guerrilla Tactics is a total beating if you ever trigger the discard ability. People do play decks with Smallpox, Raven’s Crime, and Death Cloud as well!

To make a long story short, Burn is fast, brutal, and utterly without mercy. It has the speed to outrace the format’s combo decks and to frequently decide games before cards like Siege Rhino can even enter the equation. This is not even to mention the power of Eidolon of the Great Revel, to which many decks will simply fold.

In the absence of a dedicated anti-Burn sideboard, Burn is a favorite against nearly every deck in Modern. So what does it take to beat Burn?

Well, even if you’re not a favorite to win, you want to have at least some game before sideboarding. Abzan has Siege Rhinos and Scavenging Oozes, Urzatron has Wurmcoil Engines, and many other decks can put on a respectable clock. You can’t just sit there and take Burn’s punishment. You need to have some of the right pieces in place in order for your sideboard cards to pull you ahead.

Beating Burn boils down to a three-step process: Step one is to stop their creatures immediately. You really can’t take more than a hit or two from a turn 1 Goblin Guide before the game slips out of your reach. You’ll also want to come equipped with answers to Eidolon of the Great Revel. Lightning Bolts, Disfigures, and road-block creatures like Kitchen Finks are your best tools.

Step two is to gain some life, just so that they can’t goldfish you on turn 4. This is where your dedicated anti-Burn sideboard cards will come in.

Step three is to close the game. This can meaning killing your opponent with creatures or a combo, or doing something that the Burn player can simply never come back from like connecting with a Wurmcoil Engine.

So your sideboard plan against Burn should be well-rounded. You’ll need three or four dedicated life gain cards like Timely Reinforcements, Kor Firewalker, Obstinate Baloth, or Dragon’s Claw. You’ll also need some versatile sideboard cards that can come in against Burn in addition to other matchups. These will be your all-purpose early defense cards like Disfigure, Duress, Magma Spray, or Kitchen Finks.

Beyond sideboarding, I have two general tips for beating Burn: The first is to choose your maindeck cards with Burn in mind. If you’re playing black, play with Inquisition of Kozilek—4 copies! It’s better than Thoughtseize in a field where Burn is one of the top decks. If you’re playing red and white, play with Lightning Helix—4 copies! These are fine maindeck cards, and they’ll pad your advantage against Burn.

Second, and more importantly, stop dealing damage to yourself. We’ve talked about Thoughtseize, but Dismember is also a culprit. Yes, you can cast Dismember for one mana, but paying 4 life against a Goblin Guide is not a winning play. You’re better off playing with Victim of Night.

And the bigger issue is your lands. Construct your mana base in a less greedy way. For example, consider playing with Razorverge Thicket instead of Temple Garden. Beyond that, get in the habit of fetching basic lands and tapped shocklands. When you fetch an untapped Overgrown Tomb, you Lightning Bolt youself. You’re spotting your opponent an extra copy of their best spell for free.

Infect is the deck that much of Team ChannelFireball: The Pantheon and I played at the Pro Tour. For more information, see this article. While the deck didn’t put a player into the Top 8, our team had a very strong Modern win rate and we were thrilled with our choice. Personally, I went 6-4 in Modern but would have had a chance to be 7-3 or 8-2 if I’d had a greater mastery of the deck.

Infect is the fastest deck in Modern, and as such has a great matchup against Abzan and most of the format’s combo decks. What you really don’t want to face is a deck full of Lightning Bolts backed up by either Wild Nacatls and Goblin Guides or Snapcaster Mages and Electrolyzes. Wild Defiance is a little slow, but can be an effective way to take games off of red decks.

Our main points of contention with regard to the deck list were whether Dryad Arbor should be in the main deck or the sideboard. Personally, I liked it in the main deck, but also didn’t feel that the sideboard slots were particularly precious. Carrion Call wasn’t great for me, and I just wanted to fit as many Nature’s Claims as I had room for.

Infect is very challenging to play both with and against. Some portion of games will be noncompetitive in one direction or the other, and those are very easy. However, the close games are extremely interesting, and one small misstep will mean disaster for either player. Take your time, think a turn or two ahead, and make sure that you’re sequencing your spells in the best possible way.

The other challenging aspect of the deck is mulligans. Owen Turtenwald wrote an article on this specific topic. You can feel comfortable mulliganing almost any hand that doesn’t contain either an Inkmoth Nexus or an Infect creature.

Playing against Infect has similarities to playing against Burn, except that Infect damage usually (but not always) comes in larger chunks instead of a slow and steady bleed. You need to defend yourself stating straight from turn 2, and you also need a reliable way to close out the game.

Every situation will call for a slightly different course of action, but one technique that I like to use when playing against Infect is to take a nonlethal hit of combat damage, and then use my removal spell at the end of the turn. This is preferable for two reasons: Number one is that you don’t want to give Vines of Vastwood double effectiveness as both a pump spell and a counter for your removal. Number two is that if you ever fail in your attempt to kill a creature, you leave a clear path for them to kill you immediately.

Dismember, Slaughter Pact, and Path to Exile are great against Infect. These cards are also great against Splinter Twin, so they definitely have a home despite the fact that they aren’t my favorite removal spells against the rest of the field.

Not many decks can support it, but the single best card against Infect is probably Night of Souls’ Betrayal. You can also turn to Melira, Sylvok Outcast if you’re extremely desperate. Spellskite is a more versatile sideboard card, but savvy Infect players will be prepared for it.

Finally, Fulminator Mage and Ancient Grudge are surprisingly good against Infect, since Inkmoth Nexus is their most important card. (Ancient Grudge doubles as a way to kill their Spellskites).

Like Infect, Affinity failed to put a player into the Top 8, yet earns my respect as one of the absolute top decks in Modern. Throughout Modern’s existence, Affinity has been one of the best decks in the format. (The only exception was shortly before the most recent set of bannings when U/R Delver and Birthing Pod were the most popular decks).

I was completely shocked at how small Affinity’s numbers were at Pro Tour Fate Reforged. Perhaps it’s a fear of running into hate cards, or an unwillingness to play such a technically complex deck, but the Magic community seems to shy away from Affinity.

This is part of what makes Affinity so dangerous. So long as it remains under 10% of the expected metagame, it’s hard to devote the necessary slots to cards like Stony Silence and Creeping Corrosion, which simply don’t come in in many other matchups. I expect Affinity to remain a small portion of the field, but also to be abnormally successful given its small representation.

Much of my research for my Affinity discussion came from Paul Rietzl’s recent article on the deck, so I’ll direct you there for further reading. However, a few points that I’d like to highlight:

Paul claims Burn is a naturally favorable matchup for Affinity, citing the deck’s fast clock and painless mana base. This makes Affinity one of the few decks in Modern that doesn’t need to devote substantial sideboard space to the Burn menace.

Infect is a generally close but very list-dependant matchup: “I’ve always felt like Infect was a good matchup for Affinity. We have removal, Etched Champion, and are almost as fast. Honestly, TeamCFB Pantheon’s version of Infect was about as difficult a version of Infect as I’d ever faced. Specifically, the focus on non-interactive kills and unblockability is key.”

Finally, he offers a list of his most feared cards which, flipped the other way around. Gives the rest of us some good advice for beating Affinity!

“Here are the top five scariest cards, and the decks they often show up in:

To be sure, there are other hateful cards out there. Pyroclasm and Anger of the Gods can be annoying. Seal of Primordium, Nature’s Claim, Wear // Tear, and Destructive Revelry are efficient answers. We won’t even get into Fracturing Gust, which very few people actually play. But those five cards are the most common countermeasures.”

Abzan, Splinter Twin, Burn, Infect, and Affinity will make up a respectable gauntlet if you’re preparing for a Modern tournament. Dozens of other decks are out there, but these are the ones that you should definitely expect, and the ones that are certain to maintain reasonable popularity for months to come. Moreover, in playing against these decks you’ll test yourself against the extremes of speed and brutality, and against opponents that are adaptable and hard to attack. If you can manage a favorable matchup against four, or even three of these decks, you’re on the right track.