Guilds of Ravnica is revolutionizing both Standard and Modern. But how do its best cards hold up in Legacy and Vintage? 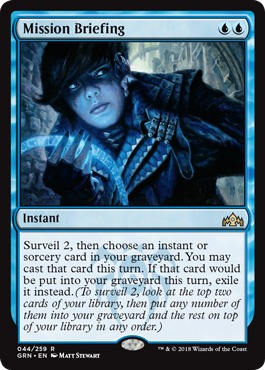 The so-called Snapcaster Mage without a body hasn’t had much impact in Modern or Standard, but it did show up in a crazy 5-0 list.

This is a High Tide deck that doesn’t use Time Spiral because it’s all at instant speed. You aim to go off with High Tide + Reset on your opponent’s turn, and Mission Briefing’s versatility is a welcome addition as another copy of High Tide, Reset, or even Accumulated Knowledge!

While Snapcaster Mage is usually better than Mission Briefing because a 2/1 body is very relevant in a normal game of Magic, this deck doesn’t care about a 2/1 creature and prefers the surveil 2 part more so that it can fuel its graveyard with Accumulated Knowledge and get rid of extra lands.

This deck is incredibly hard to play, and it requires a lot of testing and preparation. That’s why I want to wait a bit before attempting to record with it.

I’m not a Dredge expert, but while this card is a huge success in Modern, I don’t think the same can be said for Legacy.

Getting a free Lightning Helix is cool, but Legacy is less concerned with life points and racing. Many decks try to take different routes to win, and the reason Dredge loses isn’t racing.

Sometimes it’s possible to beat Modern Dredge in a fair game. You can lose game 1 to Humans, Burn, or Affinity because their clock is faster, and a drain 3 can make a difference.

In Legacy, if you let Dredge go off, it will win—period. It doesn’t matter how fast your Delver of Secrets and True-Name Nemesis are. Dread Return will make sure that once they’ve resolved a Breakthrough with a full graveyard they’ll win the game, and a Crippling Chill sitting in hand, or taking the slot of a creature like Ichorid or Prized Amalgam, could impact the outcome for the combo deck.

This is another card that is taking over Standard and Modern. I’m sure that it can be exploited in Legacy as well.

The first card that comes to mind is Buried Alive. You can do some crazy things like Swamp, Thoughtseize, Lotus Petal, Dark Ritual, Buried Alive, and attack with three Arclight Phoenix as early as turn 1.

Of course this is the format of Reanimate, Animate Dead, and Exhume, so it might just be easier to use those, but this version can skimp on the reanimation spells and focus only on discard spells, Smallpox, and other ways to disrupt your opponent, then get those Arclight Phoenixs for free from the graveyard.

Surgical Extraction will be a beating, and that card is way more ubiquitous in Legacy than it is in Modern, so you need a plan B in the sideboard. I think that can be either Grave Titan and Massacre Wurm, or a Pox transformational sideboard.

This shell looks exciting but I doubt that it will be better than B/R Reanimator.

You’ve already seen me pilot this deck in Legacy and you’ve seen me lose a lot even after a turn-1 Experimental Frenzy.

The deck as it was configured was pretty bad and definitely needs some tuning. Someone suggested playing Brainstorm, which isn’t crazy. I wanted to be only two colors so that I wouldn’t have issues with the mana base, but playing a cantrip with Experimental Frenzy in play is great and would be helpful to make sure you can find your Frenzy and play it.

Noxious Revival is another good addition so that you can set up the top card of your deck before you resolve your Experimental Frenzy.

You might say that Ad Nauseam Tendrils is just better and that there’s no need to experiment, but I like to brew in Legacy, and this card seems  exploitable to me. 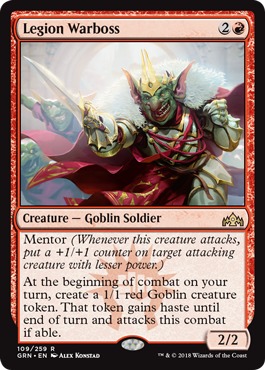 Goblin Rabblemaster’s cousin might overtake its spot in Moon Stompy.

There are many differences between the two, the first being that uncontested, Legion Warboss is a slower clock, while Goblin Rabblemaster does 1 damage, 6 damage, 8 damage, and 10 damage. Legion Warboss is: 1 damage, 5 damage, 7 damage, and 9 damage. So as you see, it’s a little bit less damage, but it will make your Goblins 2/2s, and most importantly, they don’t all have to attack each turn, only the one that is coming into play that turn, which might be useful in case the board suddenly fills up.

They both have their pros and cons, but overall I think Goblin Rabblemaster is better since in Moon Stompy you need to close the game out quickly once your opponent is locked under a Blood Moon or a Chalice of the Void. 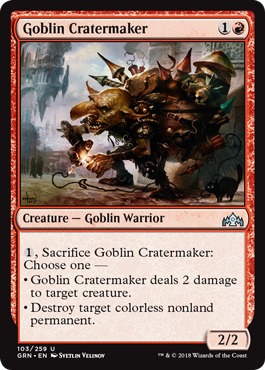 Goblins is a viable deck in Legacy, and while it just got Goblin Trashmaster from Core Set 2019 to deal with artifacts, another tool is very welcome. Goblin Cratermaker can kill an Insectile Aberration and that’s always a useful effect in a format like Legacy. The versatility is what makes this card playable. 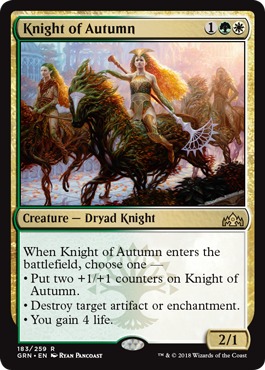 From Guilds of Ravnica on, every time you see a list with copies of Green Sun’s Zenith, you’ll see Knight of Autumn.

The versatility of a Reclamation Sage that can also gain life or become bigger is huge, and it makes Knight of Autumn a main deckable card, whereas Reclamation Sage used to be played only in the sideboard.

Elves will continue playing tribe creature, but Aggro Loam, Maverick, and other Green Sun’s Zenith based decks will pick up this Dryad Knight.

4-mana planeswalkers need to be very good to be played in Legacy, and I think Vraska, Golgari Queen could make the cut in some archetypes. 4-Color Loam might be her new home, but I also tried her in Nic Fit and she didn’t disappoint, especially because of her synergy with Veteran Explorer.

Getting rid of extra lands or extra Chalice of the Voids to work toward an ultimate, all while being able to kill any nonland permanent that costs 3 or less, is very exciting.

Vraska, Golgari Queen will not dominate Legacy, but she can take over the slot that Garruk Relentless or Chandra, Torch of Defiance occupy in midrange decks that would welcome a 4-mana planeswalker in some grindy matchups.

That’s all for Guilds of Ravnica. If you think some other cards from this set could make their way into Legacy or you have some deck building ideas with one of the cards I mentioned, please post it in the comments!