Last Friday morning, I decided I was going to play Hardened Scales at GP Houston. Many of my friends were playing it along with a good chunk of the pro community at large. In that moment, I was a bit saddened. On the one hand, I was excited to play this sweet new GW aggro-combo deck that was being heralded as the next big thing, but on the other, I had to let go of my deck of choice I had been tuning all week, UR Eldrazi. This was the next step in the evolution of the Bluedrazi deck I wrote about last week:

All my hard work over the week was paying off with a lot of winning. The UR deck looks scrappy on paper, but boy does Vile Aggregate hit hard. I kept going bigger than what my opponent was doing and smashing realities never felt better. That is, until I played against GW and also heard how bad of a matchup it was. GW is basically the UR deck but sleeker and lower to the ground. It gets to curve 1, 2, 3 while UR starts on turn 2 with a similar non-interactive strategy. If UR went big enough this wouldn’t be a problem, but it wasn’t the case. I couldn’t win the matchup and with the expected field, I knew I needed to join the GW side rather than fight (plus the Hardened Scales deck is totally sweet). Why am I writing about UR if I didn’t end up playing it?

Some of the main problems port over from the original Bluedrazi deck. Kalitas, Traitor of Ghet is still a total beating, and a ton of removal into a Goblin Dark-Dwellers can certainly be difficult to deal with. Luckily, Roast is a great way to deal with Kalitas, and because you have more big creatures, cards like Fiery Impulse and Kolaghan’s Command are less backbreaking than they are against Bluedrazi. You gain all these against fair matchups at the cost of being a little less disruptive to Rally. Again, a tradeoff worth thinking about for a future metagame, especially post-rotation. Let’s look at the additions and changes in a more specific way compared to Bluedrazi: 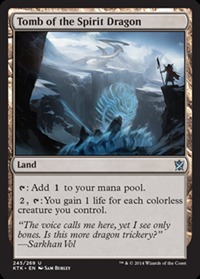 This land was absolutely incredible for me, and I had to think there was a way to add more to Bluedrazi. I want to play 4, but I’m not comfortable enough with the number of blue and red cards to play 4 and reliably cast all my cards. I’m pushing it as is, because drawing one of these can often swing a race, and activating 2 a couple turns in a row gets you into an absurdly high double-digit life total before you know it.

This deck is ultimately a curve out deck, and if it misses its curve, it loses its form of interaction in creatures. Because of this, the deck needed a couple more 2s and Hangarback ended up being the best fit. On the draw, you often end up boarding out the Mimics and bring in the last 2 Hangarbacks, and it can be a vital piece versus the more controlling decks like Mardu Green. It effectively turns off Crackling Doom given enough time, and outside of Kalitas, it provides a threat that is very hard to answer. 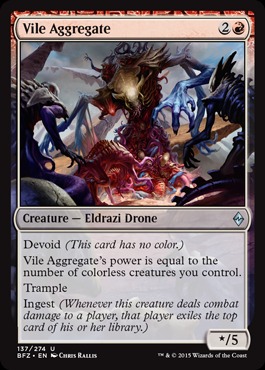 I wanted to explore UR and started with Vile Aggregate as the reason. Bluedrazi was often able to go wide, and what better way to go big than with an Aggregate while going wide? Turns out the Aggregate gets huge quickly and works incredibly well at making consistently large Mimics. Skyspawner also helps and is a natural follow-up play when you haven’t drawn your Thought-Knot Seers. In the end, Vile Aggregate functions as a mirror-breaker and is essentially the Eldrazi Tarmogoyf. 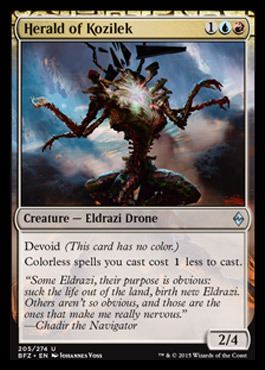 This one I initially included in my list because I thought it had the smallest chance to be good. Turns out it is actually very good! It lets you land Blades for free, which frees up turn 1 for a tapland. It also lets you curve two 2s or a turn-4 Smasher, and all this adds up to a card that more than pulls its weight. The final selling point was the body. 2/4 is quite hard to kill, and with a Blade, a 4/6 will attack through most boards and can’t even be double-blocked. 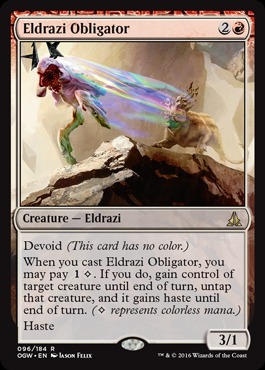 The Obligator is mostly a concession to ramp where it can single-handedly swing a game in your favor. I liked the 1-of as a miser card that would randomly win games—drawing the second copy was often clunky. If Ramp isn’t rampant, then I would cut the card from the list entirely.

I briefly mentioned Roast earlier, but having some interaction post-board is important, especially for big creatures like Anafenza, Kalitas, Siege Rhino, and Goblin Dark-Dwellers. The extra Swiftwater Cliffs comes in for a Tomb whenever you board in Roast or a counterspell just to help out the mana ratios a bit more.

The last big change to the sideboard is also a big one. Slower midrange decks were often a problem because they’d kill all your stuff and then eventually win with something. Because of the length of those games, Ugin seemed like a realistic card that might actually get cast. With the help of Scions and Herald of Kozilek it becomes even more reasonable, and functions as a way to win matchups and games you shouldn’t ever have a chance in.

And that’s UR Eldrazi! Give it a spin if you get the chance. I think it’s slightly better for the current metagame than Bluedrazi, though both are quite bad versus GW Hardened Scales so you might need to wait a week or two before taking this out on a spin once that hype dies down. The core is extremely powerful and remains intact moving forward after rotation. At least the Eldrazi feel like the good guys in Standard right now. As for Modern, well, that’s a different story.