The momentum and enthusiasm for the Frontier format continues to build, and for good reason. It is fun, exciting, and wide open. Frontier is good, clean Magic. There is a lot of experimentation and brewing going on, which makes the format relatively open.

For those of you who were unaware that Frontier is all the rage in MTG at the moment, here are the basics: it is a non-rotating format (like Modern) that extends back to Magic 2015 (so sets that feature the new hologram “dot” card face).

With that being said, today’s article will highlight some of the strategies that have proven themselves the front-runner best and defining decks of Frontier so far. If you are thinking about buying into the gold rush and heading west, these are decks you’ll want to pay attention to.

What Makes the Frontier so Frontier?

One of the biggest advantages that Frontier has going for it at the moment is that it is currently not a sanctioned format, which means there are not a ton of posted online results. IMHO, Wizards should jump on the bandwagon and strike while the iron is hot. A format that would generate a ton of action on MTGO is a legitimate format. The buy-in is lower than Modern but it doesn’t rotate, which makes players feel more comfortable about spending their money.

It would also be great as a sanctioned format at the LGS for FNM or weeknight events. I know that here have been dozens of requests at my LGS to run events and we’ve actually been doing unsanctioned Frontier tournaments by request.

Yet, the fact that Wizards hasn’t embraced Frontier is part of what gives the format its charm. Unlike Standard and Modern, Frontier is unsolved, and just like a geographical frontier, it is open for exploration.

I volunteered to do some metagame analysis of the Frontier and it turned out to be a lot more difficult than I had initially anticipated. The fact is, for various reasons (the newness of the format and the fact it isn’t sanctioned/MTGO) there isn’t a ton of compiled information about tournament results.

Sure, there are posted results and threads about decks, but the information is scattered across the web.

Khans of Tarkir Shapes the Frontier

The fetchlands are a big deal, and the fact that they pair with the BFZ dual lands gives the format liberal mana fixing. The solid fixing allows the extremely powerful 3-color spells from Khans to really shine because they can be cast reliably:

The other important element that the fetchlands provide is that they fuel the Khans block delve mechanic:

Finally! A format that let’s me play more than 1 Dig Through Time.

Khans of Tarkir surely isn’t the only thing that matters, but it does shape the landscape of the frontier.

From what I can tell looking at tournament results from around the globe, Siege Rhinos are quite popular on the Frontier. The commonality of Siege Rhino on the Frontier is equivalent to Pidgeys in PokemonGo. Fortunately, as everybody knows, Rhinos are much better in gym battles than Pidgeys.

There are certain combinations that you don’t necessarily think of but once you get them together it just feels right—peanut butter and chocolate, mmm…

“A match made in heaven. Midrange heaven.”

Frontier is full of instances where you get to add sweet cards to decks that were already great.

In pretty much every place I looked, in tournament results, Abzan performed well, which tells me the deck is real and a format defining force.

Just like Abzan upgraded with Archangel Avacyn, there are so pretty sweet additions to Dark Jeskai as well. In particular, I’m excited about:

I’m pretty stoked about casting Gearhulk to buy back Dig Through Time and crush a Rhino!

Collective Brutality is another card that slots nicely into Dark Jeskai. It is already a hyper efficient spell and I love the fact that using two modes can translate into a fast Dig Through Time!

Well, Rally does appear to be a top performer in Frontier, but it isn’t dominant based upon tournament results I’ve seen. At least, thus far.

It is interesting that Rally doesn’t gain very much even with access to several other sets, which tells you how stacked that deck was back in the day!

Another thing to keep in mind is: 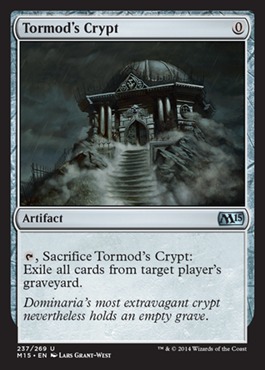 Infuriatingly, Tormod’s Crypt was not in Standard alongside Rally. It is in M15, which makes it Frontier legal and very helpful for keeping Rally in check.

You may not be able to play Affinity in Frontier, but U/R Ensoul is close:

I found Ensoul atop the heap of undefeated decks across the board on various websites and for good reason—it got some sweet upgrades!

Let’s Kaladesh up this Ensoul deck a little…

Copter is a great card and I’m not at all surprised to see it find a home in Frontier. In fact, I think it will make an appearance across the board into other decks as well.

Obviously, 4c Rally is a CoCo deck, but the card is good enough to go into a whole range of other decks. Regular old CoCo creature decks are also a thing on the Frontier:

One of the things I find really exciting about Frontier is getting to play Collected Company in a deck that has Elvish Mystic!

I played some Rally decks but they were never really my style. I don’t like to play a deck that requires me to play with my cards for 20 minutes before I actually combo off. I like to cast Collected Company and get down to the business of kicking some butt.

The Humans deck is a little more my style.

It is also worth noting:

Plug in the Chord and a lightbulb goes on.

Chord of Calling is yet another option for CoCo decks. Wall of Roots isn’t legal, so maybe Chord isn’t good enough, but it is yet another territory of the Frontier that I look forward to exploring!

I’ve laid down the basics here to get you started. Abzan, Dark Jeskai, Rally, Ensoul, and CoCo were all archetypes that reached Top 8s and went undefeated across the globe, which means they are the decks you should be preparing for at your next (first?) Frontier event.

But with that being said, there were dozens of other archetypes that put up results (albeit not as consistently across the board): Atarka Red, R/G Energy, Elves, Temur Tempo, B/R Aggro, and Deploy the Gatewatch. The list goes on and on.

The format feels like a brewer’s paradise right now, which is wonderful. Obviously, as time goes on, the format will begin to feel more solved. For the time being, take the known information about the most common decks and use it to brew up something sweet.

Frontier looks like a boatload of fun and I’m excited to drop in on a few local events for the format in the coming weeks. I’m looking forward to exploring the Frontier, how about you?

Also, if you’ve got a sweet brew you’d like to share—drop it in the comments. I’d love to see what you all are working on.