A few short weeks ago, many of us were beginning to consider Standard “solved.” G/B Delirium was winning every tournament and didn’t appear to have any unfavorable matchups among the format’s most popular decks. Until we awakened the sleeping beast.

Aetherworks Marvel was a popular deck at Pro Tour Kaladesh, but was beaten into submission shortly afterward by the prevalence of U/W Flash. But it remains an incredibly effective predator of B/G Delirium, and has become quite popular over the last few weeks.

The resurgence of Aetherworks Marvel decks has driven the format into a sort of rock, paper, scissors configuration. U/W and fast aggro beat Marvel, Marvel beats B/G, B/G beats (I should say “ranges from ‘slightly favored’ to ‘heavily favored’ against”) U/W and fast aggro. Today, I’ll examine the best ways to capitalize on the newfound popularity of Aetherworks Marvel. I don’t want my readers throwing rock in a world of paper.

Marvel decks have access to a powerful nut draw: turn-4 Emrakul, the Promised End off of an Aetherworks Marvel activation. They also have an incredibly powerful endgame, once they get to the point of hardcasting their Eldrazi. The newest breed of Marvel decks, like the one shown above, also feature the defensive elements of midrange decks, and can buy themselves a tremendous amount of time with removal spells and Ishkanah, Grafwidow. Having to combat these 3 qualities at once is quite a challenge.

One surefire way to beat Marvel is to kill them before they can cast their spells. More importantly, a fast clock is the best way to capitalize on the inherent inconsistencies of the strategy. Don’t give them the time they need to smooth their draw with Vessel of Nascency and Tormenting Voice.

The “Marvel package” of expensive Eldrazi, Aetherworks Marvels, and energy producers takes up a lot of slots. It’s simply impossible for them to play a high enough concentration of defensive cards to shut down a resilient aggro deck like Vehicles.

That said, their good draws only require them to earn a couple extra turns of breathing room before they can win the game. My beloved R/W Dwarves deck, for example, might not even be fast enough to reach 50/50 against Marvel. The faster Mardu Vehicles decks should be slightly favored against Marvel. (4-color Vehicles with Ceremonious Rejection in the sideboard will be a big favorite.) The faster you are, the better you’ll do. If the Marvel players can go retro, maybe the Boros players can too…

U/W Flash is the natural predator of Aetherworks Marvel, and has proven itself to be an excellent deck that’s capable of success in a diverse field. It will be one of the best deck choices for this weekend. 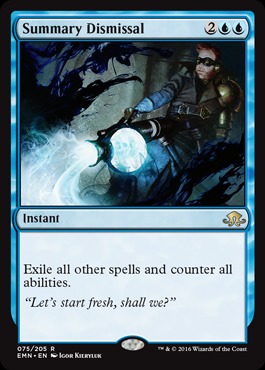 I could also see dedicated control decks making a resurgence. The challenge is fitting enough Void Shatters and Summary Dismissals to dismantle the Marvel decks without being so clunky that you’re run over by the Smuggler’s Copter decks.

What Not To Do

Quite simply, don’t do anything other than the two things recommended above.

You can include discard spells, artifact destruction, and Lost Legacy in your sideboard if you like. These are cards you’re happy to bring in against Aetherworks Marvel decks, and they might even work some of the time. But I want to emphasize that these cards do not constitute a reliable plan for winning the matchup.

It can only take a single activation of Aetherworks Marvel to win the game, so destroying the Marvel after the fact won’t always work. Similarly, stripping it out of their hand can work some of the time, but these decks play well off the top due to Vessel of Nascency and Tormenting Voice, and will also start hardcasting Emrakul, the Promised End eventually.

Finally, you can Lost Legacy the Emrakuls, but some opponents will also have Ulamog, the Ceaseless Hunger. They might also be able to grind you out fair and square if they have a Marvel in play. After all, an uncontested Marvel essentially represents a free spell (the best spell they can find in 6 cards) every turn of the game.

Choosing a slow nonblue deck this weekend will work for some players, but it seems like playing with fire to me. B/G Delirium does great against the field at large, but loses badly to R/G Marvel. R/G Marvel beats B/G Delirium and has a passable performance against the rest of the field, but what happens if you run into an even bigger Marvel deck that has a faster average goldfish and 4 Ulamog, the Ceaseless Hunger? These “all-in” versions of Marvel will crush the slow, nonblue decks, but have proven to be poor against the field at large.

So it all seems like a guessing game of trying to get paired against the narrow band of players who are not going as big as you, but are also not too fast for you to beat!

Choosing B/G Delirium and hoping to dodge Marvel is a reasonable option. Choosing R/G Marvel in order to have a well balanced deck with a great matchup against B/G is also a reasonable option. Going retro with an “all-in” version of Marvel to one-up the other Marvel players might also be just crazy enough to work.

But if you ask me, I’d recommend extracting yourself from the vicious cycle entirely and playing either U/W Flash or a fast aggro deck. There’s a lot of awesome stuff to do in Standard, and there seems to be a deck to fit every play style. But all things equal, it’s not the best weekend to be playing nonblue midrange.