Green has no shortage of powerful cards in Pauper. The color is littered with all-stars of Standards gone by. Headlined by the triumvirate of Llanowar Elves, Fyndhorn Elves, and Elvish Mystic, Rampant Growth, Wild Mongrel, and River Boa all fit the bill. But this isn’t Standard and these cards don’t pack the same punch in Pauper. Part of the issue is that green is largely limited to creature decks in the format. Ramp – strategies where Rampant Growth could shine – is the domain of Tron and the payoffs for sticking to green aren’t as good as those in other colors. Elvish Mystic and its kin are limited to a tribal deck, as green midrange decks are basically nonexistent. And while the preeminent green deck in Pauper is a beatdown deck, the band of playable creatures is relatively narrow compared to those available.
So where does this leave green? Right now the color leans on two cards to get the job done 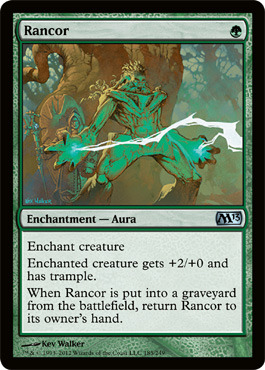 4
Hunger of the Howlpack
4
Vines of Vastwood

Rancor fits the definition of a “hell of a Magic card”. A single green mana turns any creature into a threat and it keeps coming back – provided it resolves the first time. While other cards help keep Stompy competitive, the deck would not be a staple of the metagame without Rancor. The aggro deck can operate on a low land count thanks to Quirion Ranger and Burning-Tree Emissary and it can grow creatures with Hunger of the Howlpack and Elephant Guide. But none of this matters if the creature can get chumped blocked ad infinitum. Skarrgan Pit-Skulk, Vault Skirge, and River Boa are all evasive but can be blocked. Rancor renders chump blocks all but meaningless.

Then there is Bogles. The deck is propped up by force multipliers like Ethereal Armor and Ancestral Mask. While it has access to other trample granting auras like Armadillo Cloak, Rancor is still a key component. The single green mana means that it is trivially easy to play multiple auras in a turn and still have the resources available to stick Rancor. As with Stompy, the Urza’s Legacy standout renders throwing a creature under the bus a poor choice. Unlike Stompy, however, when Bogles tramples over it is likely to kill in one swing.
Rancor decks have gotten some significant boosts recently. Stompy has been able to add Savage Swipe which can pile on the power while also clearing out a blocker. Bogles has tried out cards like Setessan Training and Warbriar Blessing and has recently adopted Ram Through. If anything, Ram Through makes Rancor more valuable as it provides green decks with a way to punch through damage outside of the combat step.

In the current metagame Rancor decks have to win quickly. Flicker Tron decks regularly hit Stonehorn Dignitary on their fourth turn which can make it hard to turn creatures sideways. While Rancor decks are capable of dealing the final points of damage before they lose the opportunity to attack, their victory isn’t exactly assured. As a result these decks have struggled somewhat as of late. 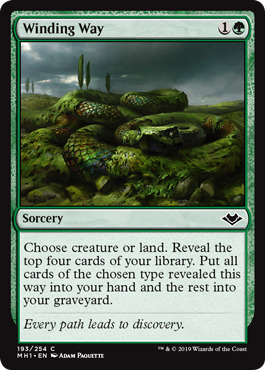 Green is apparently pretty good at drawing cards, provided those cards are creatures. When it comes to these two cards, putting bodies on the battlefield is the name of the game. While Lead the Stampede is the more popular card, both of these serve a similar function: filling your hand with gas.

Elves is one of the more explosive decks available to Pauper players. It runs a land count that appears dangerously low but given the ability to run Elvish Mystic and the like, it can routinely win on a single Forest. Elves, despite being a linear tribal deck, has multiple angles of attack. It can generate an unreasonable amount of mana with Priest of Titania, go wide with Lys Alana Huntmaster, or create an Abyss-like threat with Elvish Vanguard. Timberwatch Elf is just as broken here as it was in Onslaught-Legions draft and Quirion Ranger puts all these cards into overdrive. Elves even gets to run a pastiche of Heritage Druid thanks to the interaction of Nettle Sentinel and Birchlore Rangers. If Elves had a weakness as a deck, it was a vulnerability to sweepers. Paying four mana for Distant Melody is pretty awful if you’re drawing zero cards. Lead the Stampede gave the deck a way to reload after losing its board. While Elves would still exist without Lead the Stampede it would not be nearly as potent.

Slivers has long been a fringe contender in Pauper. Unlike Elves it could not run Distant Melody as Priest of Titania thankfully does not work with Slivers. Instead, Slivers had to rely on sticking one of its three “lords” – Muscle Sliver, Predatory Sliver, or Sinew Sliver – to grow the team. Slivers, as a deck, found some success but the addition of Lead the Stampede gave the strategy a serious boost. Previously once Slivers had emptied its hand it had to play off the top. Lead and Winding Way gave the deck a way to draw cards and in turn keep up the pressure. The result is a deck that is just as capable of winning with 5/5 creatures as before, but does not stall out in the mid-game nearly as often.

Unlike Rancor decks, Lead the Stampede decks often can find other ways to win other than combat. Elves has taken to running a copy of Viridian Longbow main in order to whittle down life total outside of combat. Slivers decks have recently added Bladeback Sliver as a way to turn their army into a gatling gun.

Green is in an odd position as it does not have an abundance of other cards that could form the backbone of other strategies. Some have taken to running Abundant Growth as a replacement for Arcum’s Astrolabe but these decks have yet to really get off the ground. Tilling Treefolk sees fringe play in Tortured Existence and Lands based strategies as a way to recycle Tranquil Thicket and the like. Crop Rotation is an extremely powerful tutor that occasionally sees play in Tron decks but has yet to find a permanent home. The result is that green can feel very one-note in Pauper. Quite simply, it’s the color of creatures.