I’ll admit I haven’t played much Modern since Mythic Championship II in London. I’ll even admit I wasn’t very excited about the format going into that event. But Modern Horizons has me pretty excited.

It’s only the beginning of the previews, but there’s already some cards that have the potential to break into Modern immediately and stir up what I feel is a fairly stale format at this point.

I’m going to start right off with potentially the most anticipated card of the set. Force of Negation looks like a card Wizards of the Coast was incredibly careful designing. The ability to interact with some combos for no mana (much like Force of Will) is awesome. The fact it doesn’t interact with creatures or protect your own threats on your turn makes Force of Negation a sweet design that if played in high numbers will push the format into a fairer direction. I like that a lot, since many Modern combo decks can be quite flimsy and fold to disruption easily. The faster they are, the more fragile they are, which is why Force should keep them in check. The card’s biggest weakness is against a combo deck like Ad Nauseam that can combo at instant speed. Force can’t stop them on your own turn.

It feels like it’s the kind of card that will see play early in the format in decks like U/W Control, likely in smaller numbers. I could see this as a two-of, replacing all copies of Dovin’s Veto and Negate, and as the format adjusts it could be moved to sideboards for specific matchups.

One problem is it’s generally going to be quite bad against decks like Humans, one of the most popular decks in the format. But even in that matchup you can still get their Aether Vial, which is likely worth it as a control player, as that card can give you a serious headache.

I do not think Force of Negation is broken and an auto four-of in every blue deck, but I do think it’s ready to see play in smaller numbers immediately and may decrease the number of combo decks we see. Decks like Neoform Combo will struggle tremendously against this card, so I’m glad we have that check in play now. I think Force hits the sweet spot for Modern.

It looks like we got a Force cycle in Modern, which is both exciting and scary. So far both of these look good to me. Force of Despair is a free, instant-speed sweeper with restrictions that will punish decks like Humans, Elves, Affinity, and any deck that’s trying to play multiple creatures in a single turn to overwhelm the opponent. Humans has an answer to Force of Despair already in Meddling Mage, but it’ll be hard to name specifically Force of Despair, as I believe it will mostly be played as a sideboard card in small numbers. Force of Despair does do some double-duty as a way to “Force of Will” a Bogle as well.

I ultimately don’t think Force of Despair is going to be played in high numbers, but it’s certainly got potential in decks that can generate raw card advantage to go with it, like Dark Confidant or alongside Jace, the Mind Sculptor in a control deck. Force is another sweet new check on the format that will see play in a bunch of sideboards and have players thinking about playing that second threat in a single turn.

Force of Vigor may be the best of the cycle. It’s messed up against Mox Opal decks. This is two zero-mana Naturalizes. You lose two cards, but get two cards in return. This is obviously not a card you’ll play maindeck very often, but I can’t imagine not playing these in multiples in sideboards, potentially replacing cards like Ancient Grudge in decks that play a high density of green cards. 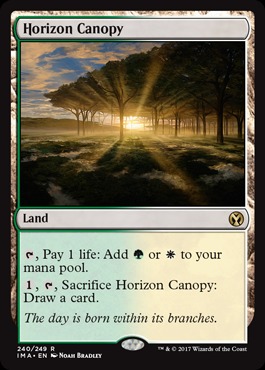 A full enemy cycle of Horizon Canopy-style lands. These are potentially the best dual lands since actual Alpha duals. Manabases in Modern are already quite painful with fetches and shocks, and adding these on top of that will be quite the balancing act. Burn immediately becomes better not only because people will deal damage to themselves with their lands, but because Burn benefits a great deal from playing these lands itself. Burn’s biggest issue is flooding out and not having the reach to finish off opponents, and adding four Sunbaked Canyons to your deck will up your win percentage in those games you were one spell short.

We need to remember that these don’t just replace shocks and fetches, especially in three-color decks, but they could replace some of your Steam Vents in an Izzet Phoenix deck. While I think these will see a tremendous amount of play, I still think you need to be careful and realize the downside of playing lands that deal damage every time you tap them for mana. Modern is an extremely fast and punishing format.

I’m interested to see how all these new lands will help enable a card like Life from the Loam, Crucible of Worlds, and the dredge mechanic in general. I could certainly see adding a couple of copies of Fiery Islet to the deck to help with velocity. I’m no Dredge expert though, so I have no idea if it can support effectively an unfetchable Mountain. I’m just glad the allied-color pairs aren’t legal because I do believe having a red-green version would make Dredge even better than it already is.

This looks very good to me. Champion of Wits is one of my all-time favorite card designs as a three-drop discard outlet. Champion of Wits unfortunately isn’t good enough for Modern due to its high eternalize cost and weak base stats; three mana for a Careful Study is not quite efficient enough.

Seasoned Pyromancer upgrades Champion of Wits. It makes you discard first, which is both upside and downside. Much like Rix Maadi Reveler, if your hand is empty then you’ll simply just draw two cards. You won’t get the two tokens, but you’ll get a three-mana 2/2 that draws two, which is an excellent rate for a grindy matchup.

As we’ve all learned, discarding first then drawing is extreme upside with the dredge mechanic. This is Cathartic Reunion on a stick and has potential to see play in a deck like Dredge, though ultimately it may end up too slow there. I think Seasoned Pyromancer is definitely strong enough for Modern, and will see play in fair decks as a value engine and also see play in decks trying to abuse the graveyard, perhaps as a sideboard option for a deck like Griselshoalbrand with Ilharg, the Raze-Boar like we saw this past weekend at the Magic Online Championship Series.

What I really like about Seasoned Pyromancer is that while it’s a great card at enabling graveyard strategies, it can also beat graveyard hate on its own merit. Imagine players going down to five cards for a Leyline of the Void against Dredge, Mardu Pyromancer, or Hollow One. You then play Seasoned Pyromancer on turn three, and it enables your primary strategies but also clocks your opponent. We’ve seen cards like Goblin Rabblemaster sided in to give a non-graveyard angle of attack, but Seasoned Pyromancer will also just slide right into these decks for their plan A. While it may be cost inefficient for game 1, it’ll be a nice additional angle for post-board games when your opponent plays cards like Rest in Peace to completely blank your strategy.

At four mana, producing a “Karnstruct” isn’t quite enough to push into a deck like Modern Affinity, as a card like Experimental Frenzy will likely beat out Urza, Lord High Artificer. Urza’s strength will likely be alongside Sai, Master Thopterist as a way to continually cast cheap artifacts, like Chromatic Star and other “eggs” to make Thopters. Both cards give you a way to produce card advantage as well. Speaking of Thopters, with Urza in play, the Thopter–Sword combo gains infinite-life and makes infinite Thopters – simply tap the Thopter to make mana and make a new one. You’ll then get to untap them all and put your entire deck into play the following turn with Urza’s five-mana ability, but I find it unlikely that will be necessary. This combo is likely a little too cute though, as the Thopter/Sword combo on its own is likely good enough.

Urza may ultimately fall just a little too short, but a card capable of producing this much mana while also giving you a solid place to sink that mana feels like it will end up with a home somewhere. I think Urza has the capability of producing a tier 1 Modern deck. For that reason, I’ll call Urza, Lord High Artificer a hit.

It’s still really early in preview season and we’re seeing a bunch of sweet cards already, as well as some misses (check back later in the week for those). I’m extremely excited about testing Modern with these new cards, and even more excited to try my hand in Modern Horizons Limited. The one thing I think would be cool to still see would be Snow-Covered Wastes. What do you think is missing from Modern Horizons?