A large study makes sense when the study subject has shown promise and there’s enough material to study. The interaction of Thopter Foundry with Sword of the Meek with Urza, Lord High Artificer enjoyed major tournament success in Modern even before the bannings, and now that Hogaak and Faithless Looting are gone, the future of the archetype looks brighter still. 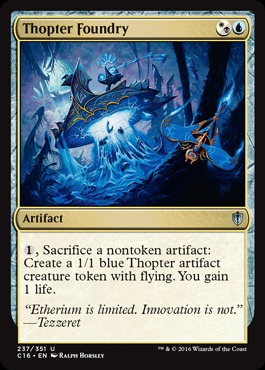 People also provided a lot of data: they submitted a total of 166 Urza’s Sword Foundry lists across the four GPs in Barcelona, Minneapolis, Birmingham, and Las Vegas. For this article, I looked at all of them and tried to determine what construction and design decisions separated the more successful from the less successful.

Alas, the more recent team GPs provided no usable data at all. No one tracks individual players’ and, by extension, decks’ performance. Generally speaking, it’s impossible to do so accurately because the third match stops or stops being relevant as soon as two members of a team win their round. Thus, a person can finish first at a tournament without winning a single game, and three teammates can each go 6-3 and still be 9-0 in the standings. This last one actually happened once when I was doing coverage. It makes for a cool story about excellent timing, but not for compelling evidence regarding the merits of their decks.

The central combo generates an arbitrarily large amount of Thopters, life, mana, and Urza activations as early as turn three. It’s a three-piece puzzle, one of which is Thopter Foundry.

Only a tiny minority of four players ran fewer than three copies of Thopter Foundry. A sample size this small usually doesn’t settle anything. But their exceptionally poor performance suggests that the majority is right: three or four copies seem correct, though the minimal difference between either doesn’t tell us which of the two numbers is better.

Then there’s Sword of the Meek:

Again, the typical vastly outperformed the atypical, which leads to an even clearer verdict: Two appear to be the optimal number of Swords.

The data on Urza, Lord High Artificer looked similar to that for Thopter Foundry in that there was no proper control group. Only nine main decks featured fewer than four copies of Urza. But these nine decks earned half as many match points as those with a full set, so the recommendation is equally unequivocal: One should go as high on Lord High Artificers as possible.

The trio has an honorary fourth member in Goblin Engineer. Using this card makes for the fastest and most reliable way to assemble the engine. It also explains the two copies of Sword of the Meek, which might as well begin life in, of all places, the graveyard.

Both the public vote and the performance data suggest that four Engineers spoil the broth, while two may be too few.

Essentially all of the above also applies to Whir of Invention, and much in the same way. Even if the numbers are less clear, they don’t cast any serious doubt on what appears to have become widely accepted consensus.

Regarding Mox Opal, almost every deck ran on four cylinders, and deviation from the norm met with dismal failure. The data on the required suspension didn’t prove anything, except that it did prove more interesting. The seven main decks without the maximum of Mishra’s Bauble, for instance, underperformed by 8.3 points. The five main decks with four Mox, four Bauble, and two Welding Jar, on the other hand, outperformed the overall average by 10.8 points.

An additional explosive accelerant, by contrast, did very well:

This picture doesn’t even tell the whole truth. The 14 players with two copies of Pentad Prism in their main deck earned 21.13 points, their average exceeding the overall average by two match wins, while the single entrant with three copies ended up on 29 points. Chances are you’ve never seen a list with Pentad Prism, simply because it’s not very common. But these numbers indicate that to be a possible mistake.

Similar to Mox Opal, the corollary again turned out to be more interesting. In a vacuum, more direct or indirect sources of snow mana for Arcum’s Astrolabe are obviously better. But so is finding room for actual duals that provide different mana on different turns, or for utility like Academy Ruins, Blast Zone, or Inventors’ Fair. As such, I expected the addition of further snow and fetch lands to yield diminishing returns after reaching some level of saturation. Well…

Except for the little plateau between 14 and 15, each additional source of snow mana correlated with a noticeable increase in points. The development stopped at 17 because no one went beyond 17 sources, although things may be leveling off at this point anyway. I wouldn’t go beyond 17 either, but I definitely wouldn’t go below 16 now.

Safety first. Not having any Ensnaring Bridge in your starting 60 is clearly wrong. However, the advantage of versions with two Bridges might just be a function of these decks still having to deal with quick Hogaaks and Vengevines.

In fact, many aspects I could examine in this section run the risk of no longer being applicable to modern Modern. Main decks with Grafdigger’s Cage performed a little better than those without, while the reverse was true for Tormod’s Crypt. Neither may be true now, whereas both may end up true again if Once Upon a Time supercharges Neobrand. The ability to draw from a toolbox is one of the deck’s biggest assets, but I don’t want to focus on the more specific answers here.

Teferi, Time Raveler is somewhat of the opposite—an answer to just about anything but Karn, the Great Creator. Main decks with Teferi made 2.2 points more on average than those without.

Pithing Needle was present in 95% of main decks. But neither presence nor absence made any difference whatsoever for points, and using Sorcerous Spyglass actively hurt.

The first Ichor Wellspring looks reasonable enough, as it can turn your Engineer into a one-Goblin value machine. But the second and third copy seem quite unnecessary. Rather, it’s surprising how many people found the space.

After gaining all the life, adding all the blue mana, and generating all the Thopters in the world, you might not want to just pass the turn, at least not back to your opponent. After all, Urza allows you to cast your whole deck. So instead, you could grill the opponent on a Ghirapur Aether Grid or loop Pyrite Spellbomb via Scrap Trawler. At the least, you could break all opposing permanents on the Spine of Ish Sah or take all the turns via Time Sieve.

A lot of players even gave themselves several options…

While Spine was better than being spineless, it is notable that only Time Sieve outperformed the “none of the above” option, and barely at that. It evidently proved more important to get Urza’s Sword Foundry running in the first place than to worry about what more to do with it once operational.

With the mirror more prevalent nowadays, one shouldn’t pass with millions of Thopters and allow the opponent to create billions of Thopters in return. Although Pithing Needle could always do the trick, Time Sieve does look appealing, precisely because it can do stuff even when the Lord High Artificer isn’t around.