Throne of Eldraine may have messed up more than just one Constructed format with Oko and Once Upon a Time, but it doesn’t get enough credit for Limited. I haven’t had this much fun drafting a set since Modern Masters. Every color is viable, the games usually go long, and there are a lot of decisions. And mill is even one of the best strategies!

The best advice I can give you about Throne of Eldraine Draft is to try to stay in one color for as long as possible. The mono-color decks in this format are good, and there are enough artifacts and hybrid cards to support them.

Coming into Mythic Championship Richmond, I was pretty close to forcing mono-green aggro. I figured that not everyone would be familiar with the deck and I would be able to get a lot of the important cards late, and even wheel them.

As an example, here is Greg Kowalski’s 3-0 draft deck from Day 2.

You would love to have Maraleaf Rider instead of Garenbrig Squire in the 2-drop slot because of its non-Human creature type, but other than that, this is as good a mono-green deck as you can get in this format. 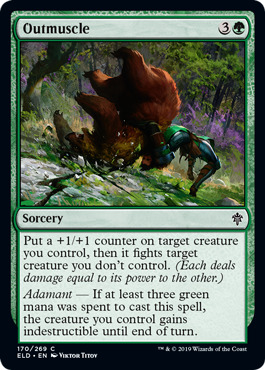 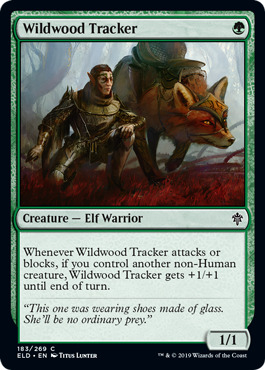 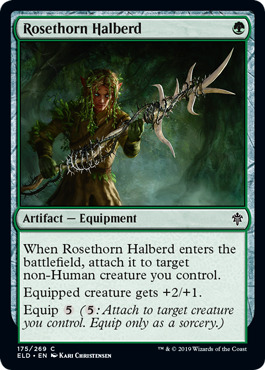 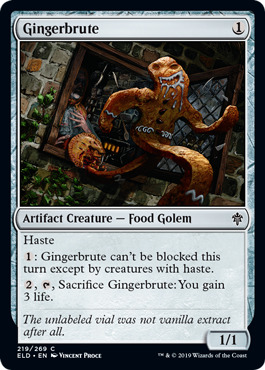 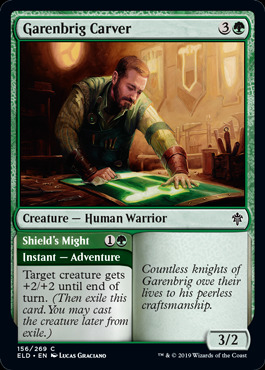 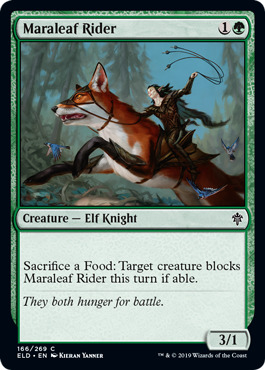 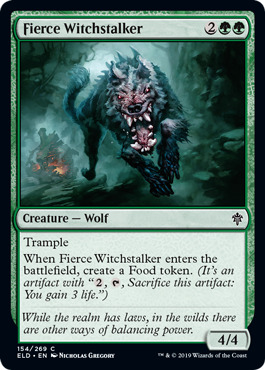 You are usually looking to play 16 lands, ideally with a few Gingerbread Cabins to give you some free fodder for Insatiable Appetite. Wildwood Tracker, Gingerbrute, and Rosethorn Halberd work well together and make your deck incredibly fast. Blue decks are essentially a bye for you, as 0/4 Walls don’t do much against 4-power attackers and unblockable Gingerbrutes. Make sure you pick up a couple pump spells to help you during combat and keep in mind the creature types for your synergies. Even something like Tall as a Beanstalk is reasonable to play.

An important thing to remember is that green has no 3-drops outside of Rosethorn Acolyte, which isn’t really something this deck is looking for, so pick up those Clockwork Servants and Henge Walker maybe a little earlier than you normally would.

An important card to pick up during the draft is Return to Nature which is a great sideboard against blue decks with Charmed Sleep. It’s also fine to maindeck it sometimes, but only if your deck is playing for the long game.

I am not a big fan of Edgewall Innkeeper decks, and I don’t pick that card very highly. The reason for that is that this isn’t Constructed, where you start the game with four in your deck (and until now, four Once Upon a Time). You will usually have only one, and if you dedicate your Draft to always taking Adventure cards over something slightly better that you would normally take for your deck, you can end up with a trainwreck. For the same reason, I tend to stay away from Lucky Clover.

Green-red and green-white are also good archetypes, mostly focusing on aggression and creature types/Adventures. You usually end up in these if you get the bomb uncommons like Grumgully, the Generous or Wandermare. Green-black is mostly about the Food synergy with a lot of individually powerful cards; and green-blue can do a bunch of different things, ranging from ramping and milling to splashing more colors.

My second most favorite deck is mono-red, and not just because I like to play it in Constructed.

At the MC, I was basically praying to open Embercleave or Torbran, but even without those cards, mono-red can be a very powerful deck. You need to focus on having a good curve and make sure you have ways to either clear your opponent’s blockers with a lot of removal or push your creatures through with cards like Barge In. I usually like playing Fling if I have some number of Weaselback Redcaps or Rampart Smashers. I like to speculate on Seven Dwarves early because if you get multiple copies, they really pay off.

In my second Draft at the MC, I drafted a similar deck with a small black splash for Steelclaw Lances, putting me in R/B Knights. This isn’t an archetype that I love to draft, but Lance is incredibly strong and even though I never saw any other removal outside of the one Scorching Dragonfire, I was still able to post a 2-1 record. 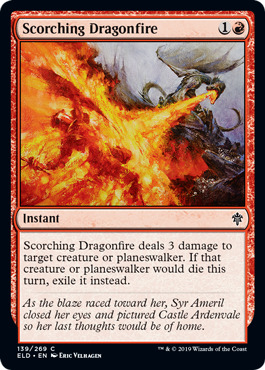 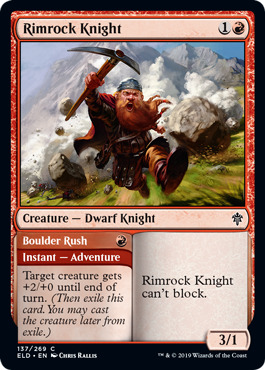 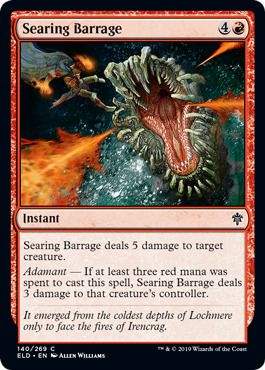 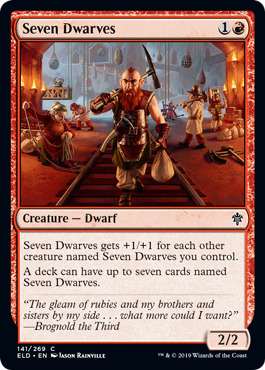 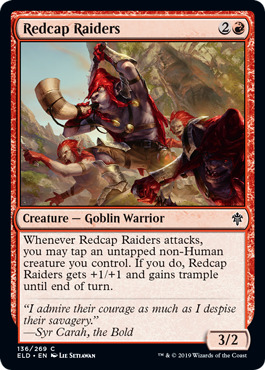 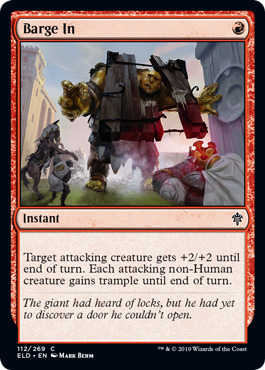 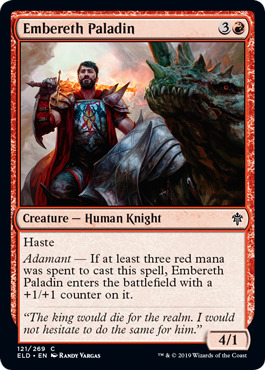 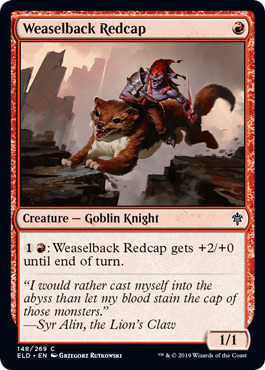 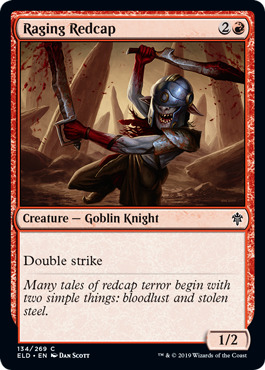 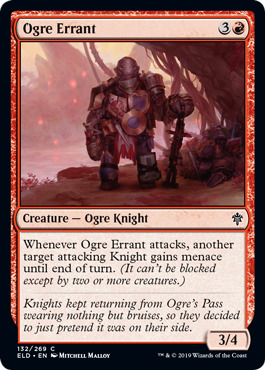 Ferocity of the Wilds is similar to Fling in that it can be decent if you have a lot of high-power creatures or Weaselback Redcaps, but most of the time it won’t make my deck. Brimstone Trebuchet is good when you are playing Knights, but unimpressive if you aren’t. Don’t pick it highly. I don’t like R/W much because the mana can be awkward and it usually just looks like a pile of cards, but I do like R/G which is usually a combination of the first two decks.

My third-favorite archetype is U/R “draw two,” but keep in mind that this is an archetype you end up in only if you open or get passed the bomb rares and uncommons. Don’t try to force it, it won’t work without the payoff cards. This was my deck from the first draft at the MC.

I started the Draft with some blue cards, not really committing to a second color, and when I wheeled Mad Ratter with three cards left in the first pack, it seemed obvious that this archetype was open. I was fortunate enough to open Irencrag Pyromancer in the second pack, but everything else was passed to me. The only problem was that I never saw any removal like Scorching Dragonfire or Charmed Sleep, which ended up costing me round 1, where I lost to a very good green/black Food deck from Kevin Jones. My 0/4 Merfolks were no match for his Savvy Hunter fueling Tempting Witch and other synergies that I simply couldn’t stop without removal.

Key cards for the archetype 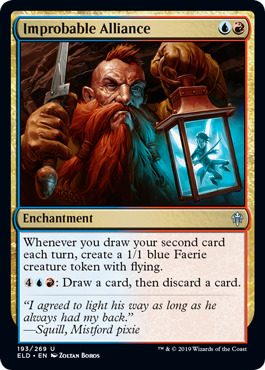 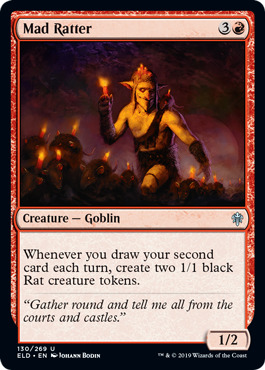 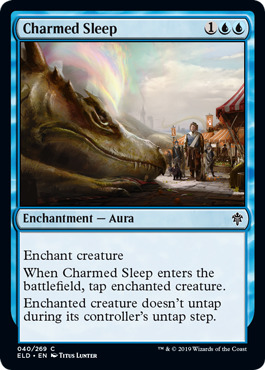 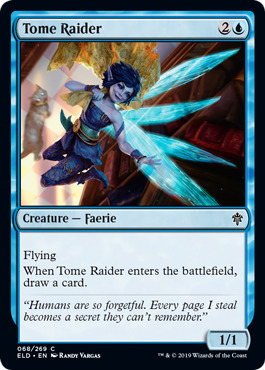 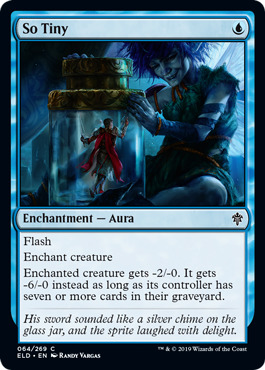 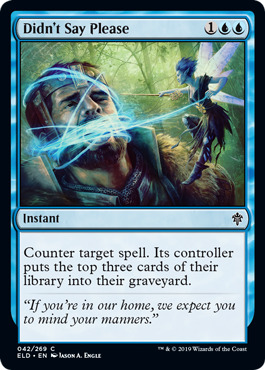 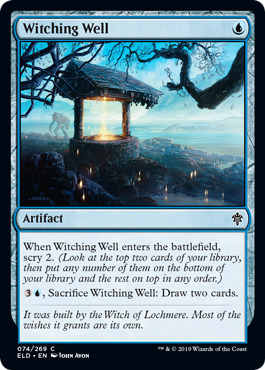 Blue in general is very good in this format, but I feel like it’s also the most exploitable (by the mono-green deck, for example) because it only really plays one way. Be prepared to draft a slow, grindy control deck that is trying to deck it’s opponent. Usually the key card to bring everything together is Merfolk Secretkeeper. It enables so many other cards that it’s really worth taking it highly.

Black might be the best color overall in a vacuum because it has two common removal spells, but I don’t like any of the decks it goes in outside of G/B Food.

Underrated and Overrated cards in this format

Embereth Shieldbreaker – There are so many playable artifacts in this format (Scalding Cauldron, Rosethorn Halberd, Gingerbrute, Jousting Dummy, Henge Walker, Food tokens) that this is essentially a mini-Flametongue Kavu.
Gingerbrute – When I first looked at it, I thought the card was unplayable, but it does so much more than just being a 1/1. It gives you the right creature type for Wildwood Tracker, it’s an artifact for Flutterfox, and it carries Rosethorn Halberd extremely well.
Rosethorn Halberd – This is basically the reason the mono-green deck works.
Syr Elenora, the Discerning – For some reason I see this card going pretty late sometimes. It may not look particularly powerful, but this card is a first pick.

Revenge of Ravens – This is by far the most overrated card in the entire set. It is a good sideboard card against certain decks (for example against the U/R draw deck), but against a lot of decks this card simply does nothing. It’s horrendous in an aggro deck, because it doesn’t help you push your attackers through and it’s bad against a deck full of big creatures as they can just mostly ignore it.
Scalding Cauldron – I’m not a big fan of this card. You have to pay 4 mana to kill a small creature and usually give your opponent a chance to play around it if you put it in play early. Embereth Shieldbreaker can punish you for playing it on turn 1.
Edgewall Innkeeper, Lucky Clover – These cards force you to make suboptimal picks for most of the Draft and have a very high chance of trainwrecking your Draft.
Order of Midnight – This card is amazing if you are aggressive or grindy, but it can be useless in blue-black control, where you need your creatures to block and your spells to interact.
Brimstone Trebuchet outside of R/B Knights – My red decks are usually very aggressive so I prefer creatures that can attack and that I can pump with Barge In and Rimrock Knight.
Skullknocker Ogre – I don’t understand the “flavor” of this card and I’m always happy to see it on my opponent’s side of the battlefield. Its ability is a disadvantage, as it allows the defending player to turn useless lands into new cards. Don’t put it into your deck.

• Crashing Drawbridge is a great sideboard card against a deck full of Gingerbrutes.
• Folio of Fancies is extremely strong, and in the right matchups it can be worth taking a few mulligans to try to find it in your opening hand, because some decks just won’t be able to beat it. If you think your opponent could be trying that, a good counter for this strategy is taking a few mulligans yourself.
• Covetous Urge can seem like a dead draw in the late game, but remember that you can take a card from your opponent’s graveyard as well.
• If your white opponent only has one creature that you want to tap with Ardenvale Tactician, you should also tap one of your own creatures to make sure it has two targets and you can’t get blown out by Shepherd of the Flock.
• Righteousness is a great sideboard card against green and sometimes red decks.