Magic is a deep and complicated game. The older the format, the more intricate card interactions become. It’s not surprising that when people first get into Modern, they have to learn some lessons through the school of hard knocks.

It’s almost like a rite of passage. You have to make some of these mistakes before you’re well versed in the format. Once you’ve goofed, you’ll almost never make the same mistake again, but you do have to punt away a couple of games before learning the lessons.

9 Mistakes Modern Players Will Make at Least Once

1) Boarding in Grafdigger’s Cage against Living End, then having that really awkward judge call once Living End resolves.

“What do you mean your creatures still come into play? Grafdigger’s Cage says cards can’t enter from the graveyard?”

2) While we’re on the subject of Living End, how about the time you tried to counter the cascade spell, only to find out the cascade trigger still goes on the stack even if the spell is countered?

Then you read Demonic Dread or Violent Outburst again. You realize that the card doesn’t actually do anything. It’s a shame you don’t have a counterspell anymore. You really could use it against the incoming Living End.

4) Trying to Searing Blaze a Death’s Shadow, then failing to kill it.

“Isn’t the Shadow dead by the time you take the damage? What do you mean the Shadow is a 6/6? Judge!”

5) Learning that you’re supposed to respond to the Aether Vial activation, because by the time the trigger resolves, the creature is already in play and it’s too late for you to do anything about it. How many times have you had fetchlands you haven’t cracked, only to have your opponent Vial in Aven Mindcensor or Leonin Arbiter? Likewise, Meddling Mage naming an instant in your hand is a huge feel-bad. Always respond to the Vial trigger. 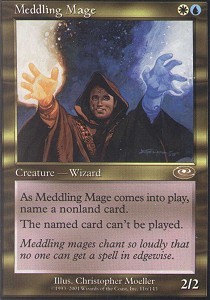 6) On a very similar note, everyone’s gotten owned by letting Chord of Calling or Whir of Invention resolve. If the creature/artifact is in play, it’s too late to do anything, my friend.

7) If there were a Hall of Fame for the most misplayed Magic cards ever, Spellskite would be in it. Spellskite’s ability can target anything, not just spells or abilities, but the target won’t be redirected unless Spellskite is a legal target.

So, what are some of Spellskite’s most dangerous and unsuccessful heists? These are all the times people attempted to steal a target with Spellskite, but paid a hefty 2 life and got nothing to show for it.

8) Fetching, and failing to find.

9) Locking yourself out with Blood Moon. Don’t lie to me. You know you’ve done it. Your hand is full of spells you can’t cast, and your opponent went about their merry way and crushed you. For a recent example check out a recent video Luis made.

I had to give Thoughtseize an honorable mention, because these aren’t actually mistakes, but they are an iconic part of the Modern experience.

10) Fetch, shock, Thoughtseize. Your opponent is on Burn.

11) Casting Thoughtseize, taking a sick spell, then watching your opponent immediately topdeck it. You know what they say about discard, right?

Even if you haven’t made every single one of these mistakes, you know how easy it is to fall into these traps. It’s just part of the Modern learning experience, and we all have some scars to show for it.  Are there other Modern goofs I missed? What punts do you still make in Modern, even though you should know better?

You can let me know on Twitter @gabyspartz, or on my stream at twitch.tv/gabyspartz.

[Editor’s Note: This article originally got a detail about Kolaghan’s Command targeting a Spellskite wrong, and on Searing Blood. Modern is hard.]

By night, Gaby streams Limited, Standard, and Modern on Twitch. By day, she's co-founder and VP of Content at Spartz, the Chicago-based media company behind Dose and OMG Facts.