Everyone’s been on the wrong end of a counterspell at some point in their Magic career, and many wizards base their entire existence around saying “no” to their opponents. Love them or hate them, counterspells are a huge part of Magic. They define eternal formats like Legacy, and (try to) keep people honest in slower formats like Standard and Modern. Today, we’re going to count down the best counterspells in the business! 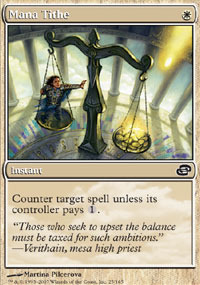 There are very few feelings more satisfying than getting someone with Mana Tithe. It doesn’t happen very often, but having no blue mana open and still wrecking someone who tapped out is one of the sweetest feelings in the world. Respect white mana!

As for Daze… I don’t want to talk about it. They just always have it.

Force of Negation is, unlike most of Magic’s best counterspells, a very new addition to the game. Appearing in Modern Horizons, this card has seen widespread adoption in blue decks in Modern, while also acting as a rearguard in Legacy to other, more entrenched options. Both these facts say a lot about Force of Negation–to be a Legacy-playable counterspell is a big deal, and that’s in addition to being the 14th-most played card in Modern.

Force of Negation is one of the fairest free spells ever printed. Its “if it’s not your turn” clause more or less mandates a role as a defensive, reactive counterspell used to disrupt the opponent–rather than, for example, a free counterspell that can be used to protect your own broken combo going off. As a relative newcomer, Force of Negation has already found its feel as a multi-format staple and will remain one of the best options for blue mages of all kinds moving forward. 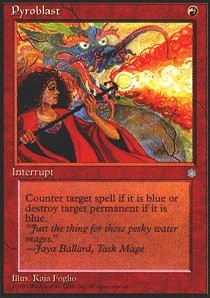 Speaking of blue mages, there are few cards they want to avoid more than Pyroblast and Red Elemental Blast. A product of a time in Magic’s history when the enemy colors really hated each other, Pyroblast is an all-purpose answer to any blue-based problems, whether on the stack or the battlefield. While obviously a very narrow card in a vacuum, Pyroblast punches well above its weight when you think of the power it offers for a single red mana.

Widely played in Legacy sideboards, where it can counter cantrips and destroy Delvers, Pyroblast ravages a format dominated and defined by blue cards. What really takes Pyroblast to the next level, however, is its invariable utility–it almost always does something. Most counterspells are dead if drawn too late, but Pyroblast is a counterspell that can still deal with a problem card after it has resolved. For one mana, it doesn’t get much better than that. 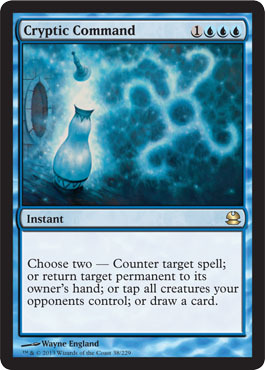 One of the most iconic blue cards ever printed, and a favorite of many of the world’s best players, Cryptic Command is one of the most versatile, useful, and fun counterspells ever printed. No matter the situation, one of its six possible modal combinations is certain to advance your gameplan, whether you’re ahead, at parity, or behind. Its stringent mana cost is no joke, but the payoffs it offers more than make up for that.

While “counter-draw” is the default mode, tapping your opponent’s team to buy another turn or bouncing any problematic permanent gives any blue deck a huge boost. There are even cool next-level uses of the card, such as flashing it back with Snapcaster to counter or tap, and then bounce your Snapcaster to do it all again. Cryptic Command is flexible, fun, and extremely sweet–if you’ve never cast Cryptic Command, you are missing out.

Force of Will is an enormously powerful, format-defining card. As zero-mana counterspell, it’s a mainstay inclusion of Legacy decks of all kinds. In aggressive Delver decks, Force of Will protects your cheap threats from removal; in slower decks built around Monastery Mentor and planeswalkers, it helps to ensure you get the time and space you need; in fast combo decks like Sneak and Show, it holds off opposing disruption and protects you while “going off.”

Along with Brainstorm, Force of Will makes Legacy what it is, and provides a very necessary safety valve to protect the format from the most degenerate combo decks that would otherwise run roughshod over everything else. Force of Negation is cut from the same cloth as Force of Will, but still can’t hold a candle to the original. Force of Will is one of the most iconic cards ever printed, and has been a Legacy staple throughout the history of the format. 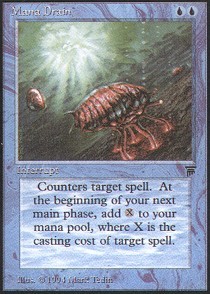 You thought actual, literal Counterspell was good? Mana Drain is straight-up busted in half. Only legal in Vintage and Commander, this card is so obnoxiously broken it would warp any and every other format around it. A two-mana unconditional counterspell is already an above-rate card–too good even for Modern–but then tacking on a bunch of bonus mana as well? Mana Drain isn’t just on another level, it’s in the stratosphere.

While its power level in Commander is curtailed by the general silliness of the format, and its playability in Vintage is held back by the format’s truly degenerate speed, anyone who had ever cast a Mana Drain will understand why it’s at the top of this list. We’ve talked about the efficiency of Pyroblast, the flexibility of Cryptic Command, and the dominance of Force of Will–but they all pale in comparison when it comes to the raw, unbridled power of Mana Drain.

What are your thoughts? What’s your favorite counterspell? Why do they always have Daze? Let me know in the comments below!