Even before the Pro Tour, I felt I had a pretty good idea of a couple cards that were being underrated in Kaladesh Drafts. I’ve been doing a ton of Kaladesh drafts over on my Twitch stream recently, and a lot of my feelings still hold true.

Today I want to clue you in on what I see as the top 3 underrated uncommons in Kaladesh Draft as determined by how late they go around and how I’ve often heard them discussed. After this article, I’ll be tossing up a two-part series on the Top 6 misleading Kaladesh uncommons, so keep your eyes peeled for that, and hopefully you’ll enjoy! 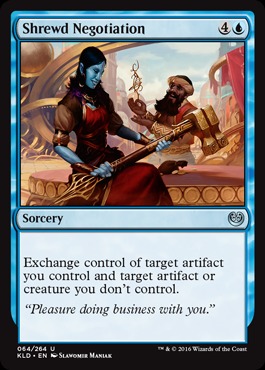 I think the most immediate comparison is to the Fate Reforged uncommon Shifting Loyalties, which was basically unplayable. That card was 6 mana instead of 5, and it also had some pretty key differences. Being able to give your opponent a useless artifact and take their best creature is huge.

There are so many things you can easily exchange, like a Puzzleknot they can’t activate or a Prophetic Prism, that a Servo token will often be one of the best things you can give them for something like their Riparian Tiger or Gearseeker Serpent. In fact, I don’t actually recall someone ever giving me a creature with Shrewd Negotiation aside from the occasional token. This is a marked difference from Shifting Loyalties and usually puts this card much closer to a Control Magic, which you don’t need me to tell you is a bomb in Limited.

This is a card that constantly tables, and I’m not really sure why. Milling 3 cards in Limited is huge. Blue is also one of the easiest colors to get energy with, as well as one of the easiest colors to help protect our Vedalken friend. You might think this little Squire is fragile, but there are two things that have stood out for me. One is that no one ever wants to kill it. I mean, it’s just a 1/2—surely they can just race it, right? (If you’re able to build around this guy even slightly, they often can’t.) And two is that it does have 2 toughness, which is nice against common forms of removal like Fireforger’s Puzzleknot, Subtle Strike, and Aethertorch Renegade.

The best part about this card is that it’s great on turn 1 when you can begin milling immediately, and it’s great on turn 15 when your opponent is already low on cards. When they only have 18 cards left in their library, removing 4 cards a turn is a 5-turn clock. Turtle up, ladies and gentlemen! 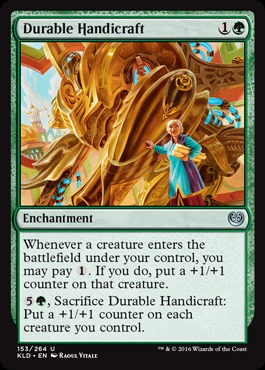 This is definitely one of my favorite uncommons to Draft around. I remember someone at the Pro Tour—I believe it was fellow Pro Tour Oath of the Gatewatch Top 8’er and Seattleite Jiachen Tao—saying that they didn’t think too highly of this card. Then I remember them saying it went way up after they had played with it a little more. That’s basically where I am.

So many games in Limited come down to similarly-sized creatures—2/3s against 2/3s, 3/4s against 3/4s—that Durable Handicraft can often break the game wide open for you at the cost of playing your (much larger) creatures a single turn later. This doesn’t even take into consideration the second ability, which makes Durable Handicraft a solid topdeck in the late game. It also threatens to make combat a nightmare for your opponent. The card basically lets you choose “both” when you fabricate, so long as you have the mana, while still upgrading your 1/1s to 2/2s. The enchantment is very good, and just recently, in the past couple days even, it has still tabled for me. It shouldn’t.

Thanks for reading and let me know what you think, along with any other Kaladesh cards that you feel have been underrated in your drafting adventures.