This is the big one. Hero’s Downfall defines Standard deckbuilding, and is the main limiting factor in terms of what creatures and planeswalkers you can reasonably put in your deck. Since its printing, Downfall has kept creatures like Polukranos in check. In a world of Downfalls, you need your threats to have immediate impact. We see this in the form of enters-the-battlefield triggers (like on Siege Rhino), haste (like on Stormbreath Dragon), or powerful planeswalker activations (Elspeth, Sun’s Champion, Nissa, Worldwaker, and Sarkhan, the Dragonspeaker come to mind). Alternatively, cheap threats that come in under Downfall or trade even on mana, like Goblin Rabblemaster or Fleecemane Lion, are a good way to fight the oppressive effect of such a versatile answer.

In the same vein, cards that need to stay in play for many turns to generate value are much weaker against Hero’s Downfall, as are expensive but powerful threats. Cards like Chandra, Pyromaster and Dragonlord Dromoka fall into this category.

Foul-Tongue has quickly become a staple main-deck card in Standard both for Esper Dragons decks looking to gain life and for opponents trying to answer the hexproof Dragonlord Ojutai and Silumgar, the Drifting Death. The two cards that have fallen the most in value in the face of this removal spell are Fleecemane Lion and Rakshasa Deathdealer. The Deathdealer has long been a nightmare for control decks, and a monstrous Lion is similarly game-ending given a clear board. Invocation changes the texture of games involving these threats, making it so you can let them live for a few turns rather than being forced to kill them immediately when your opponent taps out. As a result, control decks can use their mana much more efficiently through the midgame.

Invocation is also phenomenal against midrange red decks like Jeskai Aggro or RW Aggro. These decks both rely on powerful individual threats and burn spells to finish a control opponent off—and Foul-Tongue does a good job both at dealing with cards like Mantis Rider and at putting your life total out of reach. All in all, decks like Heroic, Jeskai Aggro, and Abzan Aggro are negatively affected by the printing of this card.

Stance fills a unique role for creature-dense Mastery of the Unseen decks (like Craig Wescoe’s Bant Midrange deck from #PTDTK), by providing removal that also helps protect your board. Stance is a nice answer to Dragonlord Ojutai without putting “dead” removal spells in your deck for the control matchup. That said, Stance is pretty embarrassing against aggressive decks like Atarka Red, so you can basically only include it as a removal spell if the rest of your deck is well positioned against aggro.

I think Stance will probably decline in popularity in Standard as decks turn to the Den Protector/Deathmist Raptor package as a form of inevitability. There are an increasing number of long-game decks in Standard that don’t rely on big creatures to close the game out.

Dromoka’s Command’s biggest effect on the format has been pushing out decks like RW Aggro and Jeskai Midrange. The card is insanely effective against Seeker of the Way, Mantis Rider, and Goblin Rabblemaster, while also outclassing answers like Lightning Strike, Stoke the Flames, and Chained to the Rocks in the form a 2-for-1.

Dromoka’s Command definitely affects the validity of certain enchantments in Standard. Naturally Courser of Kruphix and Mastery of the Unseen will see play despite the Command, but Outpost Siege and Chained to the Rocks can be liabilities. If anything, Dromoka’s Command incentivizes decks that play lots of enchantments or none at all—rather than one lynchpin card.

The weakness of Dromoka’s Command in Standard is that it is close to dead against Esper Dragons, the most popular deck. As a result we rarely see 4 copies in the main deck, with additional copies relegated to the sideboard.

Bile Blight is the default anti-aggro removal spell in Standard—it’s only 2 mana, can take out token producers like Dragon Fodder, and punish nut draws that drop redundant creatures. Blight also does a reasonable job at keeping Deathmist Raptors in check temporarily if you have a way to race.

Another trick with Bile Blight that comes up is attacking with Silumgar, the Drifting Death into an opposing Silumgar in the Esper Dragons mirror. If they block, after damage you can Blight your own Silumgar to kill theirs thanks to the -1/-1 trigger. This comes up surprisingly often in game 1s and makes Bile Blight better than other dead removal spells like Ultimate Price.

The prevalence of Bile Blight as the baseline 2-mana removal spell in Standard has also helped serve to keep Jeskai Tokens in check. 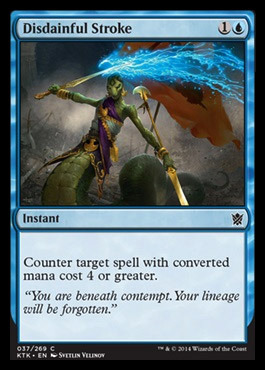 Silumgar’s Scorn is the more commonly played counterspell—but like Thoughtseize it’s not too useful to include it on this list since it answers pretty much anything (aside from Dragonlord Dromoka). While many people previously used Negate as a sideboard card, Disdainful Stroke’s ability to counter both Dig Through Time and Dragonlord Ojutai has made it a premium card in Standard. However, we have simultaneously seen decks like Atarka Red and Den Protector GW emerge as contenders in Standard, both of which are resilient against Disdainful Stroke. That said, Disdainful Stroke is among the best cards against the single most popular deck in Esper Dragons, and will always be an important player while Siege Rhino and Stormbreath Dragon are legal. 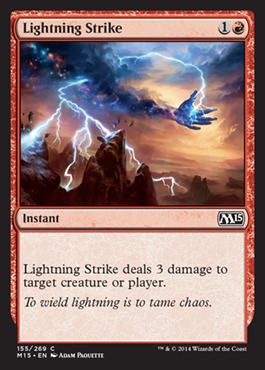 Lightning Strike was at one time the most played removal spell in Standard during the reign of RW Aggro. RW has fallen off, but RG Dragons and Atarka Red are both popular and well positioned decks. Atarka Red is probably at its best when it gets to blast through a Fleecemane Lion with Strike and keep attacking—so the best defensive cards are things like Arashin Cleric or Bile Blight that gain some value against or entirely ignore Strike. Burn spells like Lightning Strike are better than Ultimate Price against control given that they can be aimed at the opponent, so it makes sense that Atarka Red and RG Dragons are among the better aggro decks against Esper Dragons as opposed to something like Abzan Aggro. Interestingly this paradigm might make Lightning Strike a better choice than Draconic Roar in decks that would otherwise choose the latter, simply because it can reliably target the opponent.

Crux of Fate has taken on a new role in Standard—serving both as a combo with Dragons and an answer to them. I’ve seen Siege Rhino decks that play Crux of Fate to deal with Dragons and continue attacking, as well as to have a sideboard wrath against decks like Devotion or Heroic where it is an all-star. That said, it can be a bit of a bad wrath against things like RG Dragons that have important non-Dragon threats in addition to Dragons. Sometimes control decks can manage the board in a way to easily minimize this downside risk, but at other times it comes back to bite you.

Abzan Charm fell off in popularity during the Goblin Rabblemaster/Stormbreath Dragon heyday, but both of those cards (particularly the former) are seeing substantially less play than before. Abzan Charm is phenomenal in a control-dominated format, because it is not a dead card like other removal spells, but rather an instant-speed draw-two that is exactly the type of card you want for those matchups.

In addition, Abzan Charm is good at killing Dragonlord Ojutai, helps attack through a hexproof Ojutai or Silumgar, and even exiles Deathmist Raptor. A common scenario that comes up between Abzan and Esper Dragons is the “Ojutai subgame,” in which the control deck resolves Ojutai and then forces the Abzan deck to leave up removal for it while not attacking with the Dragon so they waste their open mana. In this timeframe Esper focuses on drawing cards and waiting for an opening to finally attack profitably. The instant speed on Abzan Charm lets the Abzan player hold up a removal spell but then still use their mana to draw cards and not fall behind in that subgame.

Given the popularity of Esper, Abzan Charm is a card that I think should see more play in Standard moving forward.

This card is great against Dragonlord Ojutai and Silumgar, while providing extra incremental damage against these control decks. In addition, the “highest power” clause serves to ignore the problem that Foul-Tongue Invocation runs into with the Elvish Mystics and Sylvan Caryatids in RG Dragons and Green Devotion. This is a phenomenally well-positioned effect in Standard that unfortunately falls into a pretty bad color combination with a difficult mana cost. That said, I think finding the best Crackling Doom deck may be a way to approach Standard going forward—but finding a mana base that works is an issue.

This list includes both very common (Hero’s Downfall, Bile Blight) and promising (Crackling Doom, Abzan Charm) answers that are played in Standard. The current best deck is answer-based, so choosing threats that line up against many of the removal spells in this list is an important step one to building a good Standard deck.