The key to getting the best answer is to ask the right question.

“How do I improve my playskill?” is a question everybody asks, but the problem with the question is that it’s too big, complex, and vague to answer directly. Today, I’ll be breaking down the question into smaller, specific questions that can be answered in a way that provides tangible insights to help level up your gameplay. I’ll be covering part one today and then expanding on this in a later article.

One’s “playskill” is the sum of many factors: experience, perception, critical thinking skills, focus, composure and format knowledge. You are a person, and what you know and how you think impact the plays you make.

Regardless of how good you think you are–you are exactly as good as you actually are in the moment.

Either you knew what the best line of play was, or you didn’t.

Either you knew how to sideboard for a matchup, or you didn’t.

Either you caught yourself tilting and fixed it, or you didn’t.

Either you were focused and noticed an important piece of known information and used it correctly, or you overlooked it.

A tournament doesn’t require 100% proficiency–perfection–in order to achieve a desirable result, but the higher the overall proficiency the greater the chance. A tournament tests everything we know, ranging from specific details like the cards that might be in our opponent’s deck, to our perception (did we notice every possible piece of available information and assess it accurately?), to our composure (how did we bounce back when things didn’t go our way?)

The good news is that the more we play, the easier and more naturally all the various decisions start to feel. To me, playskill is more than knowing whether to make one play over another and comes back to the fundamental questions that inform our decision-making:

Who, What, Where, When and Why

Sometimes it’s easy to know your role, for instance R/G Beatdown vs. U/W Control. The roles are so inherent to what each deck does that it’s right there in the name! But, what about something more complicated? Who’s the Beatdown in a Jund Midrange mirror?

There’s no easy cut-and-dry answer and role will depend on what is happening in the game and on the board. Often, in a mirror match each player’s role can switch back and forth multiple times in a single game.

How do we know “Who’s the Beatdown?” if the roles are variable? Now we’re asking the right question!

“What’s important right now?” Is a more context-specific way of thinking about Who’s the Beatdown?

If a player can’t win or put themselves into a position where they are approaching winning, it means there is a bottleneck somewhere. “What is the Bottleneck?” is the primary question immediately followed up with:

Is the key to putting yourself into a winning position going to arise from an advantage of mana, damage output, board presence, card advantage, or is it specifically entangled with assembling or disassembling a specific card or combination of cards?

It’s easy to know what the bottleneck is when you are losing: “I need more mana on my turn to keep up!” Or, “I’ve run out of threats and need more cards!”

It’s trickier to know what each player’s bottleneck is in closely contested games and figuring that out is always related to understanding where you are.

An in-depth understanding of the decks and cards in a format is a huge advantage to wield, and informs what is important. Superior format knowledge is like being a general with better maps of the terrain than the enemy. The effectiveness of a line of play or decision is often determined by what an opponent can do to neutralize it. In order to understand what is bottlenecking your opponent’s ability to attack or defend against your strategy, you need to know what cards they have to sway the tide of battle.

Format-specific knowledge comes directly from experience, playing games, and getting a feel for how the cards and decks match up. It also comes from reading content, paying attention to major tournament results, and consulting metagame data resources. Knowing the format well not only helps us to make more informed plays, but it’s also paramount to building and tuning the best versions of the best decks.

In Magic, having a sense of when to do one thing or another is crucial. 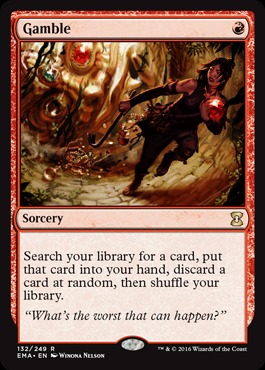 Kenny Rogers’ “The Gambler” is a great song and lyric. My favorite line: “Every hand’s a winner and every hand’s a loser.”

It evokes, for me, the concept of Schrodinger’s Cat in cardboard form. Imagine there’s a box with a cat in it, but you don’t know whether the cat is alive or dead until you open the box. In that state, until the box is opened, the cat exists to us in a state where it is both. Opening hands and even lines of play exist in a similar state in the sense that they could win or lose depending upon information we don’t yet have–but not all hands and choices are equally ponderous boxes of random cats…

Let’s start with something basic: an opening hand with no lands. The hand could win. Our opponent could keep a worse hand. We could draw three lands in a row and be fine. Still, we know that for the hand to succeed, an improbably high number of random events will need to break in our favor. We want to pick “cat boxes” with happy, healthy kittens inside, not dead ones, and luckily there are clues to aid us. Pay attention to the box. Does it have spikes and a sanguine liquid oozing out? Pick a new box, preferably one that is purring.

Obviously, the boxes are not always as simple as keeping a no-lander: Should I keep a hand that is good against some decks and bad against others in the dark? Should I keep a close hand? Should I go for the win with a pump spell? Should I counter the spell on the stack to gain a tempo edge or save the counter for something more important?

The answer for when to do one thing or the other for all these situations is “it depends.” It all depends upon the final and most complicated fundamental:

The rationale we use to inform any decision or action in a game should take into consideration all the other previous fundamental questions in context. Ask yourself:

“WHY am I making this choice over another possible choice?”

Even if you are new, even if you don’t know for sure whether your rationale is the best rationale, you should be able to have an answer to this question. It may not end up being the correct answer, but there needs to be a reason.

In a sense, the most important criteria for getting the right answer is to make sure you are asking the best questions in the first place.

To keep, or not to keep? that is the question. I discussed obvious mulligan decisions in the examples, but since it’s a fundamental question people tend to ask I’ll share my specific thoughts. It’s a good question because it’s an important part of the game. If you’ve ever watched a good streamer, they tend to look at their opening hand and identify its overall strength. Hmm… This hand looks to be…

How do you know which is which? It all comes from playing games with your deck in a format and getting a feel for which kinds of hands tend to win or lose. With the London Mulligan Rule, I always mulligan a weak hand regardless of whether I’m on seven, six, or even five cards, for a straightforward reason: I want to play a hand that has a plan. I don’t want to play a hand that hopes to have a plan someday. I tend to mulligan most medium hands on seven cards to look for a good hand. I tend to keep medium hands on seven when they are close to being good hands, which typically means that if I’m able to draw a specific card or subset of cards, my hand immediately becomes good.

For instance, a beatdown hand that has 3 lands, 1-drop, 3-drop, 2 Lightning Strikes. The hand would likely win about half the time, but if it spikes any two-drop creature off the top, then it’s in the realm of being very good. Since the London mulligan, I’ve found myself mulling like a psychopath in search of strong hands and overall I’ve gotten rewarded far more than I’ve gotten punished.

Playskill isn’t a straight path, it’s a winding road full of twists, turns, and intersections. There are many different areas for improvement worthy of one’s attention, but at the end of the day it’s understanding the relationships between the different fundamentals that inform the strongest lines of play and choices. It’s typically not “the right play” for just one reason, but because of the sum score of multiple reasons.

Check back next week for Part 2, where I’ll delve into how to use these concepts to break past some common barriers players find as they improve.